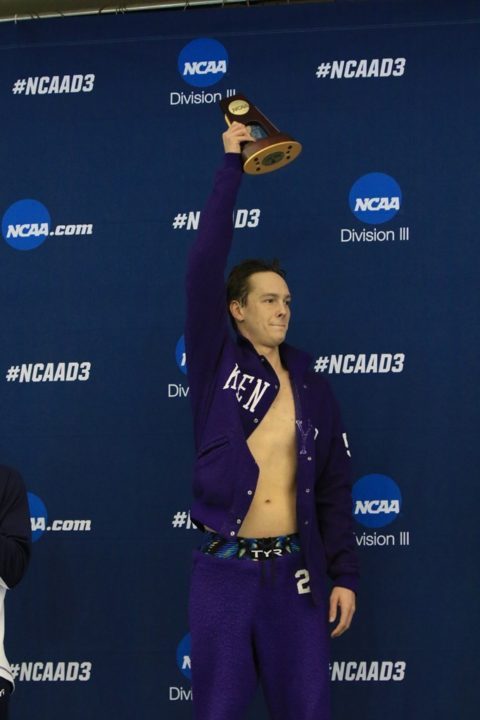 Kenyon junior Mick Bartholomew earned his first NCAA title in the 400 IM with a time of 3:50.66, which was the 300th individual title won by a Kenyon Lord. Archive photo via Kenyon Athletics/Carlos Morales

The Kenyon Lords had a special session on night two of the 2019 NCAA Division III Championships, as junior Mick Bartholomew‘s victory in the 400 IM marked Kenyon’s 300th event title in their men’s program history.

Kenyon has the most event titles of any men’s team across all three divisions. In Division III, John’s Hopkins has the second most at 58 titles, while Denison has 56 for third. The team that comes closest to Kenyon’s number of men’s event titles is Michigan, with 165 wins to their name.

It’s no surprise that Kenyon has substantially more event titles than any other team, as they also have the most men’s team titles at 34 total – also by a wide margin. Texas has the second most at 14 all-time, and Division II team CSU-Bakersfield has the third most at 13.

Bartholomew’s win was the first NCAA event title for the Lords since Arthur Conover won the 1650 and set a new NCAA Division III meet record in 2017. His winning time of 3:50.66 is the third fastest time in Kenyon’s history, behind Conover’s 3:50.43 from 2015 NCAAs, and Harrison Curley, who owns the NCAA Division III record of 3:46.62. This marks the first national title for the Kenyon junior.

The Lords currently sit in second place after night two with 272 points behind their conference rivals Denison, who have 305.5 points.