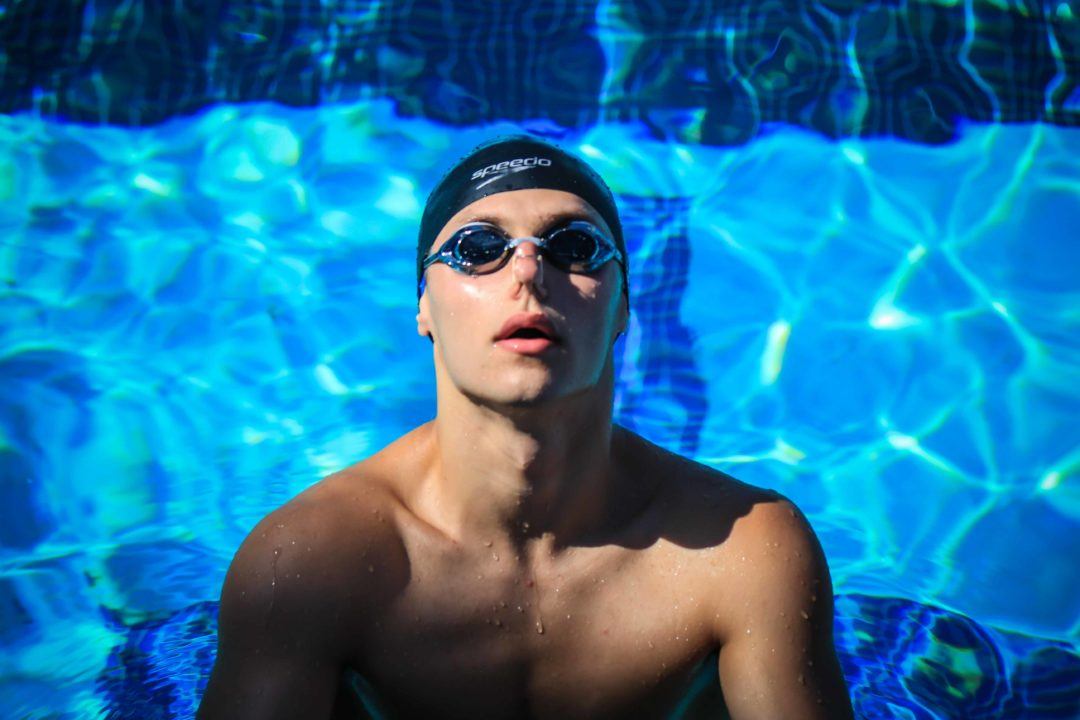 The early top seeds remain with only a handful of scratches in the top 24 seeds. The girls 100 IM lines up some of the nation’s top 16-year-old multi-stroke stars: Grace Sheble is the top seed for Nova of Virginia, with Nation’s Capital’s Phoebe Bacon and Arlington Aquatic Club’s Torri Huske also in the mix. Rockville Montgomery 18-year-old Ryan Vipavetz is the top boys 1000 free seed, while 15-year-old Paige McKenna of Nation’s Capital leads the girls event, looking to improve her 21st rank in U.S. 15-16 age group history in that event.

Nation’s Capital is the top seed in both the boys and girls 800 free relays.

The timelines for tonight show a pretty long timed finals session: the meet is running two-pool racing tonight, but heats of the 1000 free still aren’t projected to finish until about 5:15 Eastern or later – well over an hour after the session start. That means you probably won’t see official results or event recaps go up here for awhile, but stay tuned as well update events when we can.

15-year-old Paige McKenna moved up to 17th all-time in USA Swimming’s 15-16 ranks of the 1000 free, turning in a 9:35.99 to win the opening event of NCSA Juniors. Nation’s Capital’s McKenna was already ranked 21st in age group history with more than a year left in the age group. She passes Olympian Elizabeth Beisel on the list and is within 11 seconds of everybody on the list not named Katie Ledecky.

Fellow 15-year-old Rachel Stege of Fox Valley dropped eight seconds off her best to surge to 46th on that list. Stege went 9:43.09 to take second.

Third went to 18-year-old Brooke Travis out of NCAP. Travis is a high school senior committed to Virginia Tech for next year. She went 9:49.65, eking out bronze over Lexington Dolphin Rachel Klinker (9:49.67).

It was a good 1000 free event for Virginia Tech commits. After Travis’s big swim on the girls side, incoming VT freshman Ryan Vipavetz held the top spot in the boys event. He didn’t quite better his lifetime-best of 9:05, but won in 9:07.56, beating the field by three seconds for Rockville Montgomery Swim Club.

Unattached Garrett McGovern of Virginia went 9:10.75 for second, besting NOVA’s Christopher Dallavalle. The 16-year-old McGovern dropped more than ten seconds from seed, and his time would rank just outside the the top 100 in USA Swimming 15-16 age group history. 18-year-old Dallavalle dropped two and a half seconds from seed to earn bronze.

It was a battle of different strokes. Huske is best known for her national high school record 100 fly, while Bacon and Stadden are both accomplished backstrokers at the senior national level.

Those three finished a good half-second ahead of the rest of the field.

St. Croix Swim Club standout Shane Blinkman won the tough 100 IM by six tenths of a second. He’s an outgoing senior headed to Stanford next year and is one of the better 200 IMers in his recruiting class. Blinkman, ranked #17 in his class last spring, is joined by three more athletes from our top 20 recruits in the class of 2019:

Of note: 16-year-old Anthony Grimm, who made waves with his stellar 50 back split at Virginia’s high school state meet, had the fastest time of the whole event at 47.80, but was disqualified out of his heat.

NOVA of Virginia was second, about a second and a half back. Grace Sheble had a stellar 1:46.88 leadoff leg, beating her own best time by two tenths. She now ranks 98th in the all-time 15-16 ranks.

Long Island took third, getting a strong 1:46.03 anchor leg out of Chloe Stepanek, who already ranks 92nd on that 15-16 age group list.

Long Island stormed home on a 1:37.27 anchor leg from Jason Louser, who will join the University of California next year. Timothy Marski was 1:38.40 on the leadoff, with Ryan Davidoff (1:41.77) and William Swartout (1:39.07) swimming the middle two legs.

Fox Valley took third on a 1:37.83 split from Aayush Deshpande.

I’m pretty sure he got DQed though

The backstroke breakout was close, I thought he came up in time

Nvm he did get DQed

Backstroke breakout and it looked like he moved early on the start. Shame. He clearly was the fastest by far.

the state as a whole

One of the most underrated swimming states in the country

Lol is it? If it’s underrated at all, it’s only because they give out 45 state championships…but even then, i’m not sure I’d call it ‘underrated.’ I think everyone is well aware of the quality out of the state of Virginia.

It would be awesome to see Dresselrace a really of guys going from in water starts. Sub 45 for sure, not sure sub 44

Throw Vlad in there. Fastest SCM 100 IMer in history.

2013 Florent Manaudou would have been silly fast, too. I think he’d have given Vlad a run for his money.

McGovern has been swimming for NOVA since December. Attaches next week