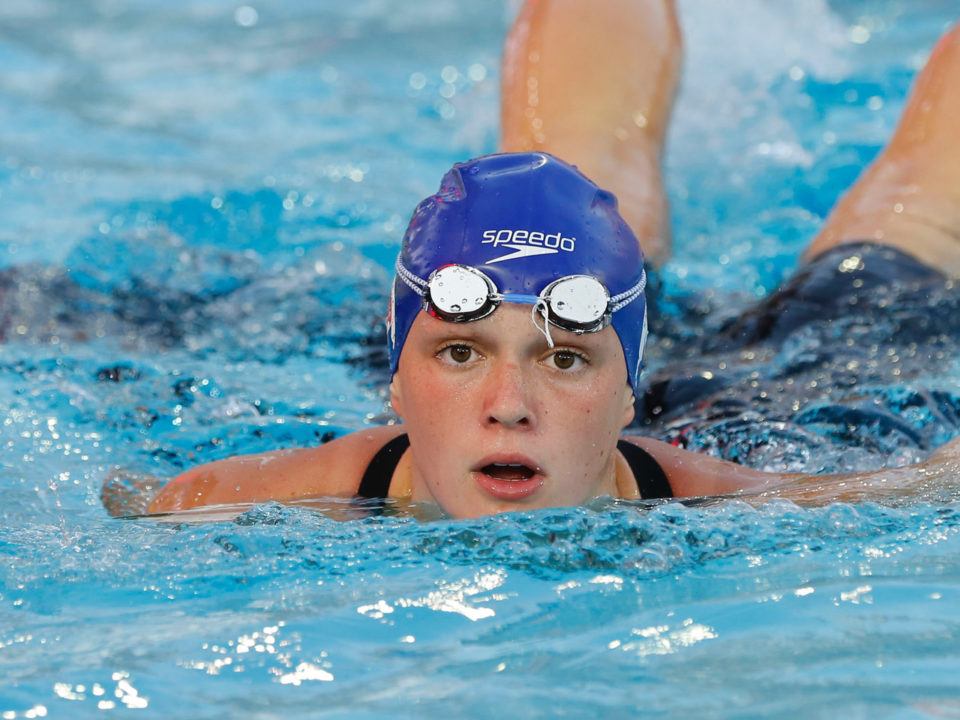 Isabelle Stadden has won both backstroke races at the 2019 NCSA Junior National Championships, but Phoebe Bacon is the top seed in the 50 back. Archive photo via Tim Binning/TheSwimPictures.com

Anthony Grimm declared false starts in both of his individual events, and Tess Howley missed the finals in both of her events on Saturday (50 back, 50 free), which means that Saturday evening’s session at the NCSA Junior National Championships will be without the meet’s two National Age Group Record Breakers so far at this meet.

In Grimm’s absence, the favorite in the 50 back becomes Jack Dolan after he swam a 22.31 to qualify 1st from prelims. His primary competitors will be Aidan Stoffle of Summit Swimming (22.45) and Wesley Jekel of Badger Aquatics Club (22.54), with all 3 being 18-year olds swimming in their last NCSA Spring Championship.

The girls’ 50 back will also be a highlight of finals. While Ellie Waldrep and Kaylyn Schoof both slipped to the B-Final (in a tight prelims session – Waldrep was .01 seconds from the A-final, while Schoof was .03 seconds from the A final), Phoebe Bacon and Isabelle Stadden both qualified as the top 2 seeds in 24.69 and 24.90, respectively. Stadden has beaten Bacon in each of the two backstroke events so far, but both races were close (.35 in the 100 and .25 in the 200). Bacon has more pure speed than Stadden, but Stadden’s speed has been ‘on’ at this meet so far.

Both swimmers had back-to-back swims to start the prelims session, and both added about 2 seconds from their bests in the 200 IM prelims. For Bacon, though, that was still enough to make the A-final, qualifying 2nd in 1:59.33 behind Grace Sheble (1:58.73). Katelyn Mack is the only swimmer in the A final to beat her seed time, swimming a 1:59.37 to qualify 3rd.

Stadden, meanwhile, went 2:01.95, which was 12th in the prelims session and puts her in the B final.

Grace Cooper of Delta Aquatics was the top qualifier in that 50 free in 22.51, but not by much. Talia Bates qualified 2nd in 22.52, just .01 seconds behind. Last year, Bates finished 2nd and Cooper finished 4th at this meet. Both swimmers were just shy of their lifetime bests in prelims, which for both swimmers were done in last year’s NCSA final (where both dropped big time from prelims).

Other Top Qualifiers on Saturday:

Grimm DFS’d because he was kicked out of the meet.

Do you know why he was kicked out of the meet

You can’t just drop that bomb and not say why!

The officials decided he was too fast for these mere mortals, a selfish move if you ask me but he was really taking a mental tole on his losing competitors

If Anthony Grimm was kicked out of the meet then why NCSA awarded him Outstanding Meet Performance on final day? Stop spreading LIES “The Michael Phelps Caterpillar”!!!! You know this is not true.