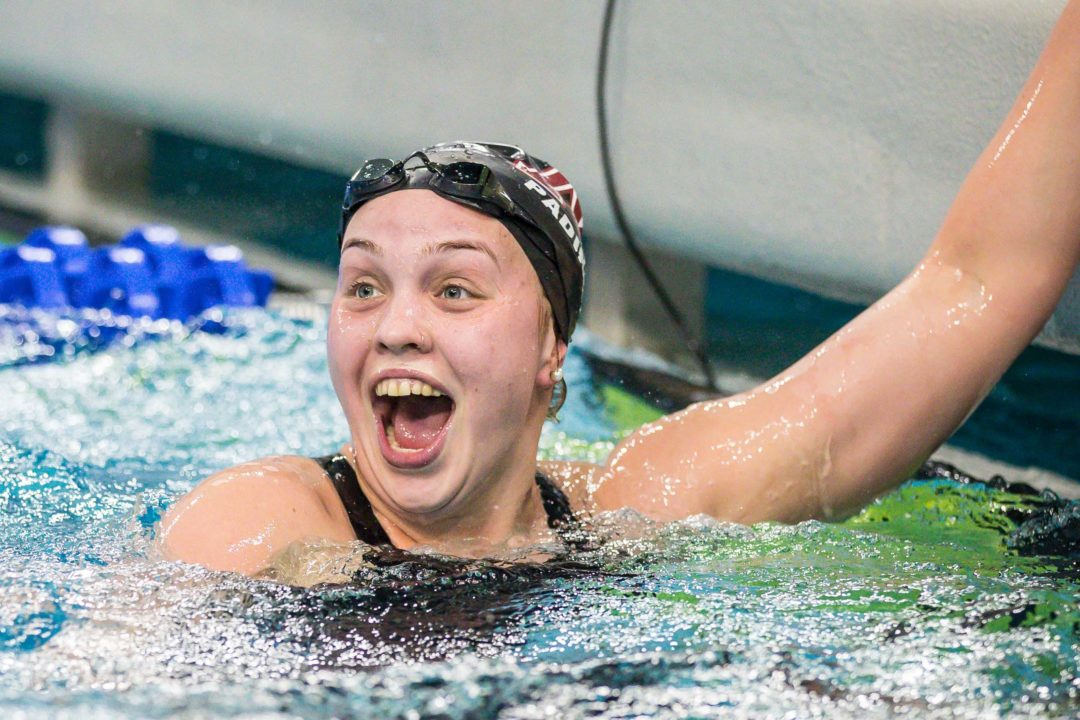 Minnesota's Mackenzie Padington had a huge swim in the eaarly heats of the mile, dropping nearly 16 seconds to lead the pack with only the final heat to go. Current photo via Jack Spitser/Spitser Photography

The last day of the 2019 Women’s NCAA Championships features timed finals of the 1650 freestyle. The earlier heats are now complete, with the fastest heat still to swim in finals. At least the top 8 finishers from this afternoon’s session are guaranteed to score for their teams.

Minnesota’s Mackenzie Padington had a huge swim in the eaarly heats of the mile, dropping nearly 16 seconds to lead the pack with only the final heat to go. Padington hit the wall in 15:47.16, making her the only woman under 16:00 so far. That has a chance to win, as only Penn State’s Ally McHugh and Hawaii’s Phoebe Hines are seeded faster in the finals heat, and both have been off their bests throughout the meet so far. Padington has had a great meet in the distance freestyles. She swam a best time in the 500 free on Thursday and finished 3rd with a new school record.

We could see quite a few swimmers score in the top 8 based on their swims this afternoon. The 8th seed in the finals heat is NC State’s Tamila Holub, who’s entered with a 15:56.91. Michigan’s Sierra Schmidt knocked 4 seconds off her best to take 2nd through the early heats in 15:50.19. Teammate Rose Bi will also score, as she sits 5th so far with a 15:55.89.

Alabama’s Kensey McMahon is the 3rd fastest through the afternoon. She dropped 6 seconds for a 15:53.18. Arizona State’s Emma Nordin also finished faster than tonight’s 8th seed, posting a 15:54.83 as she dropped 5 seconds.

So Katie would have won by… 3 lengths?