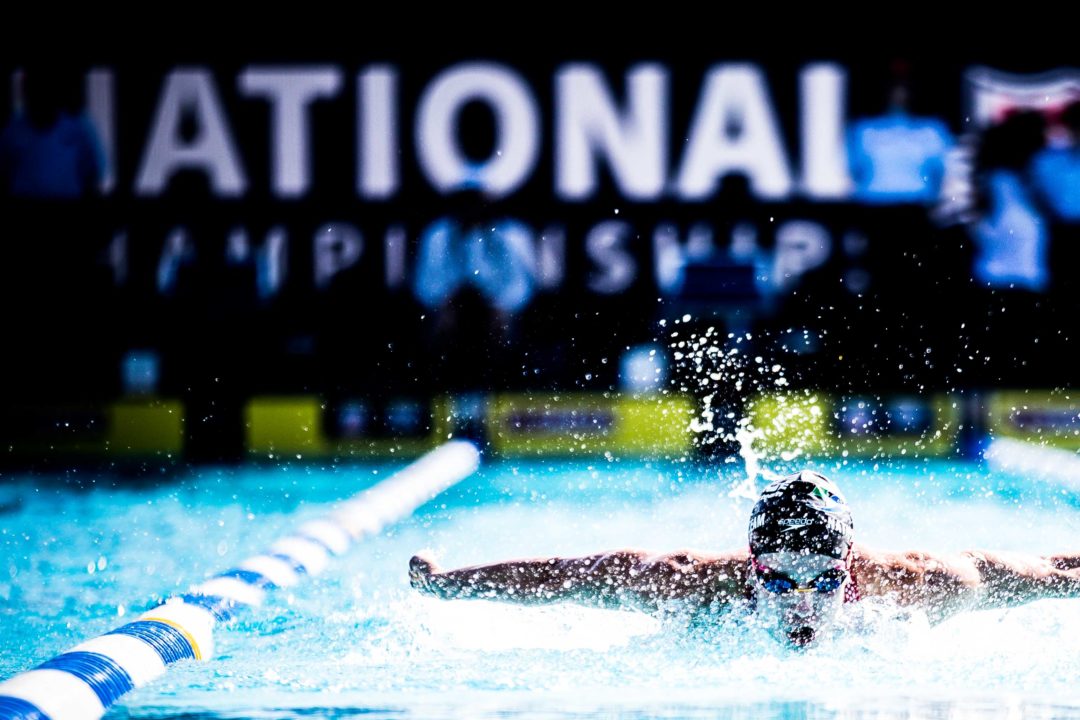 Follow along here as we will provide a live recap of tonight's Golden Goggles awards gala. Stock photo via Jack Spitser/Spitser Photography

One of the biggest nights in swimming, the yearly USA Swimming Golden Goggles Awards gala, is happening tonight at the JW Marriott at LA Live in Los Angeles, California. You can follow along on the USA Swimming site. Below is the link:

For nearly two months, fans have been voting for each of the award categories, which will count for a portion of the final decision.

8:30 pm – Remainder of the program, including the rest of the award presentations

And now the first award of the evening, presented by 1976 Olympic gold medalist John Naber

The lone world record performance of this category, Regan Smith certainly deserved this award. After placing 8th in her 2017 Worlds debut, this performance was crucial in solidifying her name on the world stage. At just 17 years old, she broke the world record during the 200 back semifinals, formerly held by Missy Franklin. She later sealed her first world title in the final.

Now it’s time for the men’s race of the year, presented by Olympic ice skaters Maia and Alex Shibutani

Dressel had a great shot at winning this category, 4 out of 5 odds to be exact. Yet of the four races, Dressel’s 100 fly was the race to come out on top. Known for his sprint freestyle, Dressel showed off his stellar butterfly skills by breaking his first individual world record. This record was special because he was able to take down Michael Phelps‘ 2009 super-suited 100 fly world record.

Back from the break, Rowdy Gaines and Nathan Adrian presented their efforts with the Make A Splash Foundation.

We resume with the awards with Breakout Performer, presented by Olympic champions Amanda Beard and Megan Quann Jedrick

While Flickinger, Litherland, and Moore impressed with their medal wins in Gwangju, it was incomparable to Regan Smith’s Worlds performance. Her dominant performance in her lone individual event, the 200 back, was able to earn her a spot on the 4×100 medley relay. Smith took advantage of this opportunity and took down her second backstroke world record of the meet. Just 3 minutes later, the relay broke the 2017 world record. And for that, Smith deserves this second Golden Goggle to her collection.

Nathan Adrian had a historic comeback after battling testicular cancer, which put a pause on his training preparations towards Worlds and the upcoming Olympics. At the 2019 World Championships, Adrian swam to a 3-medal haul, earning two golds and one silver. Among the highlights, his anchor leg on the men’s 4×100 free relay was able to hold off the Russians for the world title.

This award marks Adrian’s 4th Golden Goggle in his career.

Coach of the Year — Mike Parratto

The head coach of Minnesota-based Riptide Swim Team, Mike Parratto certainly earned this award as Regan Smith is now his second prodigy along with 12-time Olympic medalist Jenny Thompson. Not only did he carve out Smith’s stellar backstroke, but also aided her butterfly capabilities, which earned her a national title in the 200-meter event.

Fans have known since day one of voting that Caeleb Dressel would be crowned Male Athlete of the Year, and there are many reasons why Dressel deserves this second Golden Goggle of the evening. Along with his 100 fly world record, Dressel won a record-breaking 8 medals at a single World championships, taking out his 2017 performance/Michael Phelps’ record of 7. In addition to this feat, Dressel now has the 3rd-most World gold medals of any male swimmer with 13 golds.

This is Dressel’s second time winning this category after winning in 2017. Spanning his career, this now marks his 6th Golden Goggle win.

It was a stiff field among this year’s Female Athlete of the Year award, with all four women presenting incredible accomplishments. Lilly King defended both of her sprint breast world titles, Katie Ledecky overcame illness to win her signature 800 free, and Regan Smith walked away with 2 gold medals and 3 world records.

Yet it was Simone Manuel who came out on top. At the 2019 World Championships, Manuel was deemed the fastest woman in the pool with her 50 and 100 free world titles. Not only that, she became the first woman to win 7 medals at a single world championships, just one short off of male counterpart Caeleb Dressel.

Really think Ryan Held deserves the perseverance award. He reached the highest high in 2016, and then had 2 years of not making the major international travel squad. To go through what he has gone through, make a major coaching change with Coley, and break the US Open Record is deserving of at least one nomination in some category.

Nomination sure, but win it over Adrian? Not imo

I’d agree he’s worth of conversation, but not to win it. Since this award requires pushing through some type of ‘low’, which would you rather go through? 2 years of not making international teams & a coaching change? Or cancer?

Dressel himself said that he can’t take credit for his relay medals because most of that goes to his teammates.

Yeah. Not only did Phelps have less relays available, the medley relay DQ’d in prelims, which is the only thing that stopped him from winning 8.

The only person to set 2 WORLD RECORDS in less time than REGAN SMITH was STEVE CLARK at the 1964 Olympics. He led off the 4×100 free relay in a WR 52.9, and two minutes and forty seconds later DON SCOLLANDER touched in for a WR 3:33. (The Regan Smith delta was approximately 2:53.)