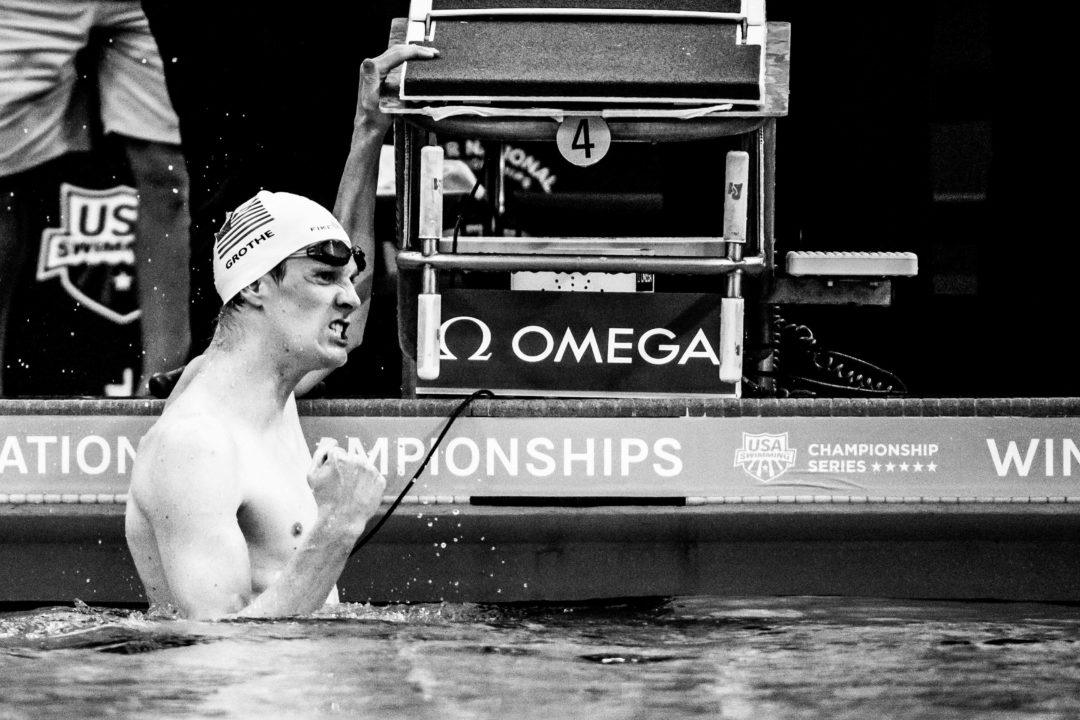 Zane Grothe has the hot hand in the men's 800 free heading into U.S. Nationals. Will anybody challenge him? Current photo via Mike Lewis/Ola Vista Photography

In June of 2017 the IOC announced the addition of the men’s 800 freestyle, women’s 1500 freestyle, and mixed 400 medley relay to the swimming program for the 2020 Summer Olympics in Tokyo. While this news was largely received by swimming fans with cheers (Katie Ledecky in the 1500, of course) and jeers (skepticism of mixed relays), it was received by Olympic hopefuls with open arms as it provides additional opportunities to qualify. In the past, the men’s 800 (and women’s 1500) was a niche event only competed in non-Olympic years. Now, it will be a focus for elite-level swimmers in training and competition as a part of their quadrennial plan.

It’s hard to argue that another swimmer – male or female – has the same level of momentum Zane Grothe does heading into the 2018 U.S. National Championships. After graduating from Auburn in the spring of 2014, the now 26 year-old decided to stay in the sport, but he wasn’t seeing any improvements. In March of 2015, contemplating retirement and seeking a fresh start, Grothe made the move to Bloomington, IN to train at the Indiana University – the first time he had ever trained in what he calls a “high-volume program.” The fruits of that labor paid dividends quickly as Grothe won the 400 free at the 2015 U.S. National Championships with a 3:45.98 and placed 2nd in the 200 free with a 1:47.11. The former was a lifetime best by nearly 6 seconds – an anomaly for a postgraduate swimmer. While he swam another lifetime best in the 400 the following summer at the 2016 U.S. Olympic Trials with a 3:45.60, he fell short of an Olympic berth by 0.95 with a 4th place finish.

With that being said, a Grothe victory in the 800 later this month in Irvine isn’t a foregone conclusion. Clark Smith will have something to say here. The 23 year-old, who clipped Grothe for the title at last summer’s U.S. National Championships in Indianapolis (7:50.43 to 7:50.97), is the favorite on paper. After all, he has the fastest lifetime best of anyone in the field. However, Smith has faced medical issues this season which could play a role in his performance later this month. Dealing with Atrial Fibrillation over the last several years, he underwent a minimally-invasive heart ablation surgery on March 12 that forced him to pull out of April’s TYR Pro Swim Series in Mesa. Since then, Smith has been swimming relatively well – posting times of 3:53.67 in the 400 free and 15:32.05 in the 1500 free in June. The biggest question mark for him throughout his career has been his ability to consistently perform up to his potential when the lights are brightest. Will he be able to fight off the hot hand in Grothe? Will he let one of the young guns take his spot? Time will tell.

After that, the flood gates open with 5 or so guys floating somewhere around the 7:55 range. The main contenders are Grant Shoults, True Sweetser, Andrew Abruzzo, Robert Finke, and Michael Brinegar.

Rounding out the field is a trio of teenagers in Abruzzo, Finke, and Brinegar. All three of them have lifetime bests well under the 8:00 mark and are more than capable of making some noise in this event. The issue for these guys will be speed – each of them are primarily 1500 specialists. Finke placed 2nd at last summer’s U.S. National Championships and earned a spot on the World Championship team where he finished 21st (15:15).

Never met him but Abruzzo looks ready to explode onto the scene. Time will tell

@bobo True Sweetser, of Leland Stanford Junior University, will impress all of us by swimming the second 400 of his 800 free considerably faster than his first 400, in fact by the largest margin ever seen. Witness

It is not a Junior university; it is named after Leland Stanford Junior

I’d like to see how well KL would do against the big boys.