Following Heart Ablation in March, Clark Smith Back to Training 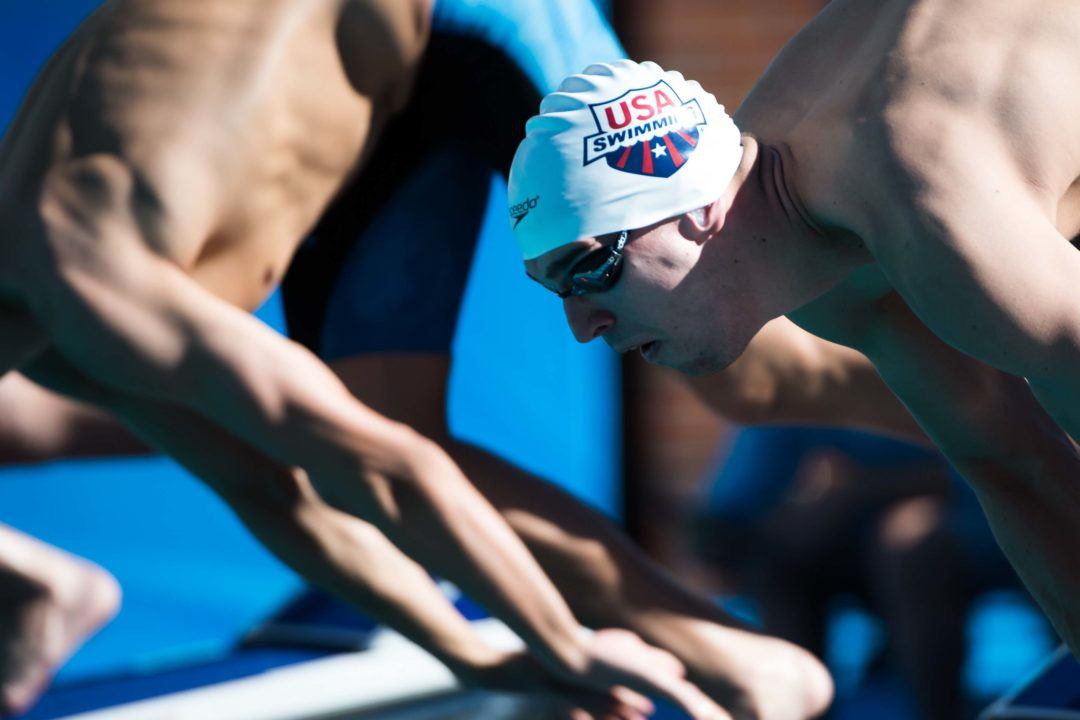 Olympian Clark Smith, who has had recurring Atrial Fibrilation over the past several years, underwent a heart ablation procedure on March 12th.... Archive photo via Mike Lewis/Ola Vista Photography

Olympian Clark Smith, who has had recurring Atrial Fibrilation over the past several years, underwent a heart ablation procedure on March 12th. Back in the water now, he told SwimSwam he’ll still skip the Mesa Pro Swim Series stop but plans on returning at the first racing opportunity after Mesa.

Smith’s procedure was a catheter ablation, which is when thin wires are inserted in the neck or groin and then threaded through a vein into the heart. This is part of a process that can stop abnormal heart functions and address larger heart-related issues.

Smith has suffered ongoing heart episodes of late– in December of 2017, an episode lasted nearly a full day, and he had to scratch the rest of the Texas Invite after swimming prelims of the first day. He had another episode during the Atlanta Pro Swim Series, leading him to push the procedure to March after initially planning on having it done in August. After his March 12 procedure, he was back in the water on March 14th and swam easy for a week.

“I’m back 100% now, but I won’t be competing at the Mesa Pro Swim,” said Smith. “I want to get some solid work behind me before my next meet. I don’t know what meet that will be, but I’ll race at the next opportunity after Mesa. I’ll certainly race once or twice before the Santa Clara Pro Swim.”

Smith added that the procedure was minimally-invasive and ‘not stressful.’

Though he didn’t fly to Minnesota to see the Men’s NCAA Championships, he described the meet as “nearly as stressful watching as a fan.”

“I was sitting in a restaurant with my dad, just refreshing the newsfeed every 10 minutes during the last finals session.  I’m proud they pulled it off.”

Good luck with your recovery, Clark! The US needs you at full strength for the World Championships next year!

totally joining that line of heart felt support . U can do it Clark ?

Great news. Hopefully this will resolve the issue and he can go on to be the superstar he was always meant to be.

So now I know not to come to Swim Swam for medical advice. A catheter is not a wire. It is a tube.

Actually in this case they are wires as it uses electrical impulses.

Actually, in all cases, catheters are tubes. You can, however, pass contrast dye, balloons, stents, wires, etc. through the catheter. If your doctor tries to thread a wire directly through a blood vessel without a catheter, then make sure you reserve a bed in the ICU beforehand.

Dude, we’re here to read about Clark Smith, not to be hit over the head with your clearly superior intellect

Then don’t read what I write.

If it took this article for you to realise this wasn’t the place for medical advice, I think there might be wider issues to consider…

The issue is that you take everything literally.

It’s really not invasive. My son had the same procedure at 6. Spent one night in the hospital and was back to normal the next day.

This is not open heart, and likely sedation only. It all comes down to the final heart rhythm.

Your usually put under completely and one night stay in the hospital and a week out of the water.

I have a serious question. I’m not sure this is the forum but, what the hell, I’ll ask anyway: Is it possible that taking the banned substance, meldonium, would protect athletes against these kinds of heart issues?

Clark Smith, Kyle Chalmers, Jack Cartwright; all these young men have the same sort of issues with their heart and I know a few guys who are now in their mid-40’s to late-50’s who have a similar condition. According to the guys I’ve spoken, they’re telling me its an exercise induced condition. They all were elite athletes through their early teens and into their 20’s, participating in sports that had a heavy aerobic training component. Their doctors told them that sort of training… Read more »

I would hesitate to say exercise causes these conditions. I would guess most of the Time these conditions have existed in people who have then and only get noticed when exercising intensely. One not a doctor but that’d be my logical guess. As for using the medications to prevent these conditions I would compare it to taking adderal to prevent ADHD. It’s not necessary unless you have a diagnosed disease taking it to “prevent disease” is just an excuse to cheat imo.

Wonderful news, so glad he is healthy, and continuing with his career.