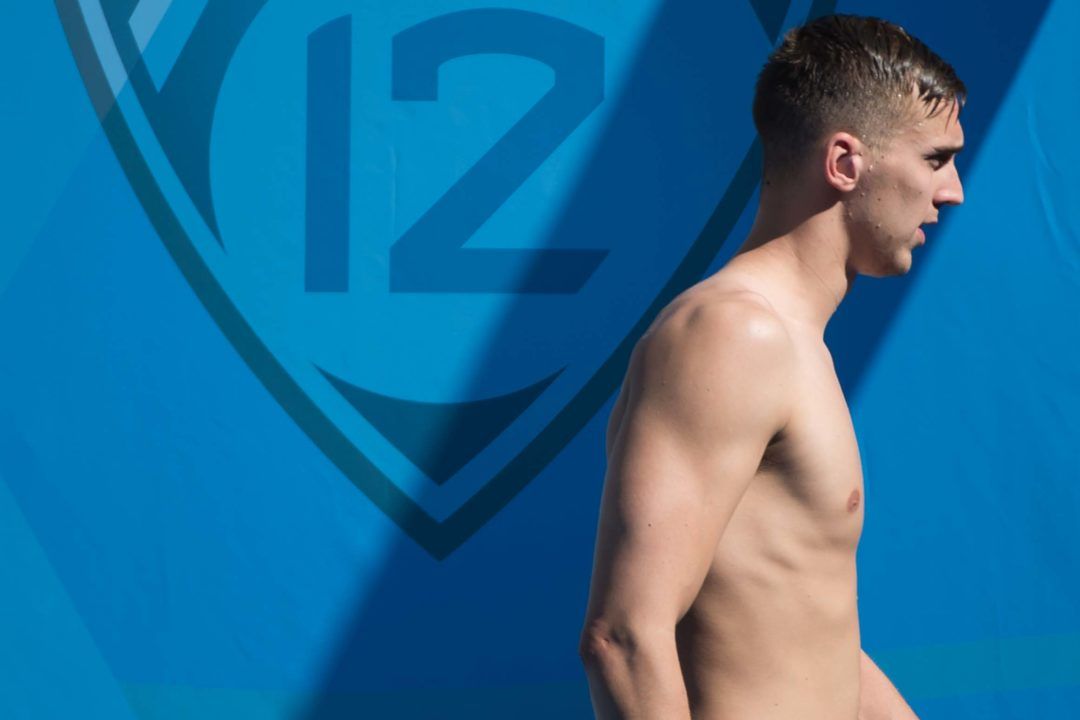 US National Team member Clark Smith has withdrawn from the remainder of the Texas Hall of Fame Invitational this weekend with a health condition. Archive photo via Mike Lewis/Ola Vista Photography

US National Team member Clark Smith has withdrawn from the remainder of the Texas Hall of Fame Invitational this weekend with a health condition.

Smith has had reoccuring Atrial Fibrilation for the past 4 years, and had an episode on Sunday and Monday of this week that lasted almost a full day. Smith says that was concerning, because there is a risk of having a stroke if you’re left into it long enough. He says that he had to go to the emergency room to have his heart shocked back into rhythm.

“I had been tapering for this meet and was gunning for some best times so I went ahead and decided to swim anyway,” Smith said. “During the 500 this morning, the A-fib came back toward the end of the race and a bit afterwards. The trainer on deck thought it probably wasn’t safe to swim tonight considering I’d be going harder than the morning swim.”

Smith said that his doctors thought it would be best for him to sit out the rest of the meet to give his new medicine time to kick in, which he said was “a bit of a disappointment.”

“I’m glad Zane was able to chip away at the record tonight, it needed to go down,” Smith said of Grothe’s swim. When Smith broke the record last year, he said the record was soft, and that it still was even after he broke it.

Leah Smith (no relation) also scratched Thursday’s 500 free finals – she was the top seed in the women’s race. Her representatives didn’t have any information on the reasons for her withdrawal.

Pulling for you Clark! Get well and turn it loose again!

Wishing Clark and his family all the best and praying for a long career of breaking records.

A-fib is not to be taken lightly. There are procedures to correct it, but ultimately the heart is having issues. I’m hoping Clark will see he’s achieved enough in his career to retire proudly and happily. If he just can’t stay away from the pool, then swim just for fitness or coach or both. Good Luck Clark and thank you for your thrilling career!

Sorry ACC FANN! He’s not retiring! AFIB is fixable and real common with athlete athletes. Clark is one tough dude. Best of luck to Clark.

A Fib is no joke… get some Coumadin and feel better!

He’s one of my favorite swimmers. Get well, Clark!

same here – one of the most beautiful stroke in freestyle on the planet – I wish him well .

Is it not correctable with surgery? I hope it is because I like watching that fellow swim!

Really?! Heart surgery and then pushing your heart to the max, just so you can watch him swim?

it is often correctable with a procedure called ablation. Not really surgery because it is done in cath lab setting. Often done for a-fib that recurs. But also they need to consider where the stimulus is from in the heart and what other structures it is near. It is a pretty low-risk procedure though. With his condition now he is likely taking a blood thinner and it is unknown the effects of this on performance.

Kyle Chalmers (100 free Olympic gold medalist) had the ablation procedure this year. Years ago, I think Rebecca Soni did as well. In Soni’s case, her biggest successes came afterwards, so it is possible to have the procedure and still achieve the highest levels.

His record was broken and then he scratched because of a broken heart. Bad taste yes…hope he heals up soon.

What is that supposed to mean? He scratched after prelims. It is bad taste that you said that.

6
0
Reply
fluidg
Reply to  To Soon

There are some really creepy people in our sport. Seems like comments are just getting worse. That’s heartbreaking.

Everyone who said he choked all these years…..let this article sink in.

Clark, keep up the good work & rest for now.

Well, people have been questioning his heart.

Clearly they were right.

After his epic display of guts to prevail in that historic mile at NCAAs, he never has to prove anything to anyone, ever again.