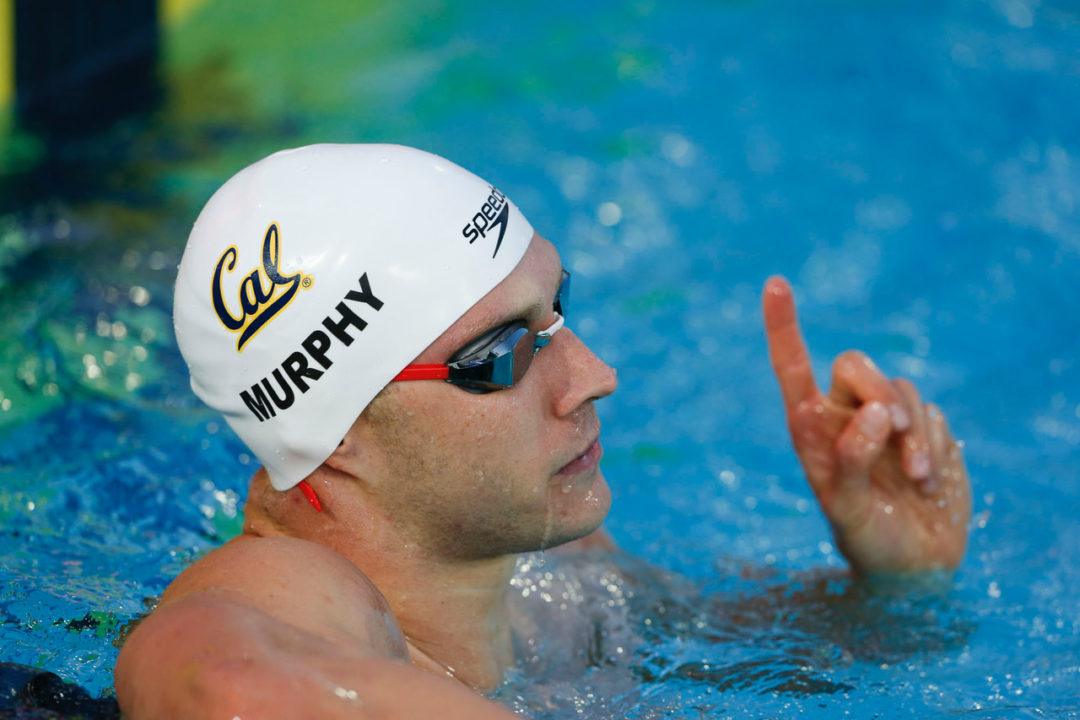 Ryan Murphy will go for the backstroke sweep on day 4 of the 2018 Phillips 66 Nationals Championships. Current photo via Tim Binning/TheSwimPictures.com

Stop us if you’ve heard this one before: Katie Ledecky will swim away from the field, and Leah Smith will more-than-likely be second. Behind them, Stanford’s Katie Drabot is looking good for third, with her best time coming this season in 4:08.29. She’s had a great meet so far, qualifying for the Pan Pacs team with her second-place finish in the 200 fly. Clustered with her, look for Kaersten Meitz, whose best is 4:08.35, and has been 4:10.88 this year. Around her is a group including Cierra Runge, Sierra Schmidt, Hannah Moore, and 14-year-old phenom Claire Tuggle in the 4:11-12 season-best range, with Runge and Schmitt having significantly better lifetime bests (4:04.55 and 4:07.47). Also be on the lookout for what Allison Schmitt can do – she’s seeded 8th with a 4:09.27, but has a lifetime best of 4:01.77 and showed in the 200 that she is very much back in the conversation.

Zane Grothe has been the fastest American this year by almost 3 seconds, and went a best time in the 1500 Wednesday, so he looks to be the favorite to win (his best time is 3:44.43). Behind him are Texas’ Townley Haas and Clark Smith, whose lifetime bests of 3:45.05 and 3:45.74 can rival Grothe’s. Junior world champ Andrew Abruzzo is the only 18-and-under swimmer in the field to have broken 3:50, and if he has a good swim, watch for him to challenge the senior swimmers. Another junior to watch out for is Jack LeVant, who dropped a blazing-fast 200 free Thursday morning; he’s entered as the 12-seed with a 3:51.4, but with the way he’s already swum, he appears to have mid-to-high 3:40s potential. Yet another junior swimmer, Trey Freeman, could go sub-3:50. Others in the A-final fix could include Grant Shoults, Mitch D’Arrigo, and True Sweetser.

World record holder Lilly King has been the only American under 1:06 this year, and looked good in her 50 breast win Friday. The question is: do either Molly Hannis or Katie Meili have any chance of keeping up? Likely not, but it should be a great race for second place. Meili has been 1:06.49 this year with a lifetime best of 1:05.03, while Hannis has been 1:06.09 this year, which is her lifetime best. While many wrote off Micah Sumrall, she stunned Friday with a commanding 200 breast win, and was the fastest in the field at the 100 by almost a full second. Breeja Larson and Bethany Galat are other entrants who have been under 1:07 (Larson under 1:06), and should be in the mix.

Former DIII standout Andrew Wilson was the fastest in the field but a few tenths at the 100-mark of his 2nd-place 200 breast finish yesterday, and is a significant podium threat. Yes, Kevin Cordes and Cody Miller have sat atop the national ranks for quite some time now, but Wilson has been over a second-and-a-half faster than Miller this season and appears to be in great shape. And, of course, we can’t forget Michael Andrew, who matched and then set the US Open record in the 50 breast yesterday – while swimming six races over the course of the day. Others to watch with best times in the 59-mid range are Nic Fink and Josh Prenot (who had a stellar swim in his 200 breast win Thursday). While Ian Finnerty has less long course experience than the rest of the field, he dropped nearly two seconds at the 2018 NCAA Championships to become the short course American record holder, so watch out for another potential drop from him.

The three top qualifiers in this race all have best times sub-59, but only one of them is 16 years old. Regan Smith is the wild card amongst the trio of herself (PR 58.95), Kathleen Baker (PR 58.54) and Olivia Smoliga (58.77). She came from behind to tie Baker for first and set a world junior record in the 200 back Thursday, but hasn’t been sub-59 in the 100 this year like Baker has. Ali Deloof is the final entrant who’s been under 1:00 this year, and should be in the mix after taking second in the 50 to Smoliga Friday. Another youngster, Isabelle Stadden, is primed to break 1:00, and NCAA standout Asia Seidt will try to convert her short course success into long course meters

This race was already world record holder Ryan Murphy‘s to lose, but given the meet so far, it’s highly unlikely he takes anything but gold. He won the 200 back by a wide margin Thursday, then somewhat unexpectedly broke the American record in the 50 back Friday night. The backstroke sweep is very much in play. Behind him, it should be a battle between Justin Ress, Jacob Pebley, and Matt Grevers. Ress has been the fastest of the trio this year (53.30), but that’s right on his best. But of course, the Olympic champion Grevers has been well over a second faster in his lifetime, but only 53.73 this year. Pebley has also been sub-53 at his best, but 53.93 this year. After those four, there’s a steep dropoff to a group of swimmers in the 55-mid range this year. Among those, John Shebat and Daniel Carr have been under 55 at some point in their lives, and Austin Katz is poised to improve on his PR of 55.41.

Anyone else feeling that the Dressel/Andrew rivalry is the new Phelps/Lochte? One perceptive, immeasurably skilled & versatile swimmer with another who is a little less articulate and lesser skilled but still stunningly world class?

LOL until they start breaking each others world records….. It won’t even be close to the Phelps/Lochte rivalry.

Idk why people keep comparing them to Phelps and Lochte.

Of course they are no Phelps/Lochte, but these two will be battling it out in the 50 free for years to come it looks like.

Phelps and Lochte are at their own level in 200IM at their peak. No one else can break 1.55. Dressel and Andrew are still faced with rivals from other countries such as Ben Proud and Bruno Fratus.

I was going to say, Michael Andrew is one of the most articulate young people I’ve ever encountered.

He gives much better interviews than almost anyone on the senior team. Last night Litherlands interview made me want to punch a wall

You should probably get some help for that.

Wait — Who are we comparing to whom? I’m trying to figure out who gave an better interview back in the day — Pouting/mute Phelps vs. Lochte-esque Lochte.

no not at all, Dressel is obviously at a different level than Andrew right now

I don’t care who you are, that’s funny.

Not really. Dressel’s at his peak, Andrews is still on the ascendancy. I think Dressel holds the upper hand through the 2020 Olympics, but I wouldn’t be surprised to see him retire after that. He’s kind of a mercurial dude. While Andrews should make the Oly team in 2020, and be in the hunt for a medal in the 50 free, I don’t expect his big breakout to come until ’21 WC’s…kinda like Dressel blew up in ’17.

In other news, happy birthday to king Josh Prenot. 25 today

Any of those 6 dudes could win the 100 breast and I wouldn’t be super shocked. Like, maybe Will Licon winning it would be surprising-ish? Hell of a toss-up event.