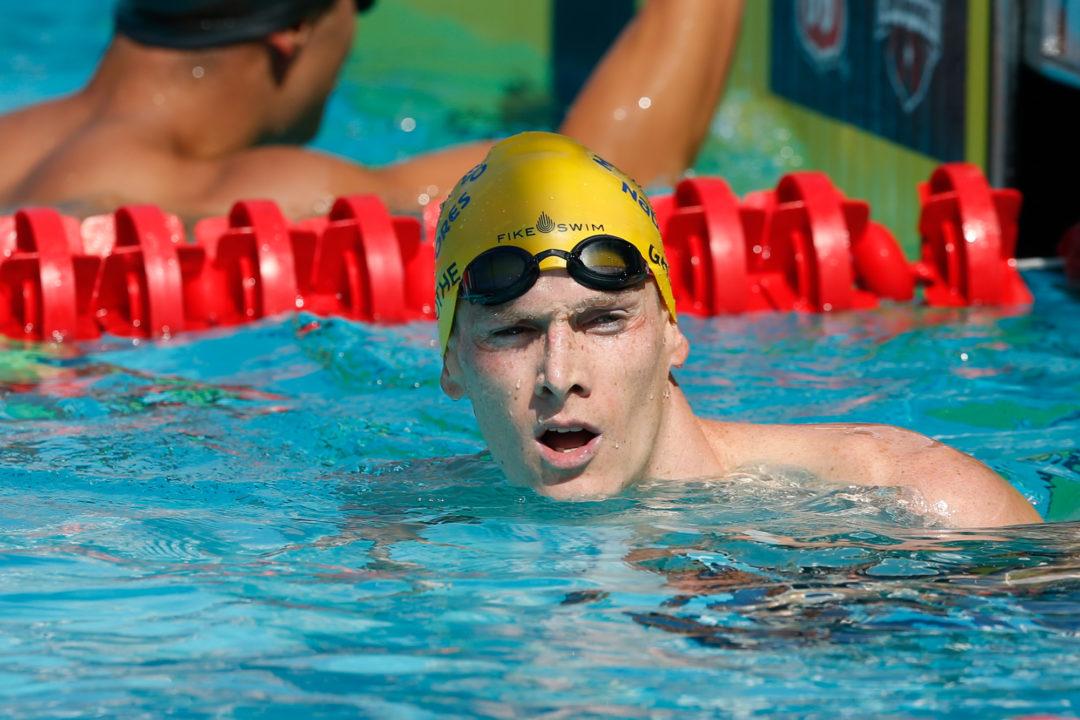 World Record-holder Katie Ledecky of Stanford Swimming will occupy lane 4 in tonight’s final, with Tucson Ford’s Leah Smith in the familiar spot just to her right. The pair are two of the four fastest swimmers in history in this event; Ledecky owns the top 10 performances ever while Smith ranks #2 among American women and #4 worldwide. They went 4:02.69 and 4:05.14, respectively, in heats but have been as fast as 3:57.94 and 4:04.23 this season. The next wave of qualifiers put up 4:08s in heats: Sierra Schmidt of Michigan, Georgia’s Hali Flickinger, Trojan Swim Club’s Haley Anderson, and Purdue’s Kaersten Meitz could make the battle for third place exciting. Claire Tuggle, 14, from Clovis Swim Club, was the top qualifier for the B final with 4:10.17, the 4th-fastest time in U.S. history for 13-14 girls. Tuggle, who has already dropped 5 seconds this season, is only 3 seconds off the National Age Group Record in this event.

Defending national champion Zane Grothe from Mission Viejo/Indiana notched the morning’s fastest time, going 3:48.30 in a wire-to-wire win of the final heat. Grothe, who swam the 400 at 2017 World Championships, finished 3rd in the 1500 free on Wednesday night and is looking at this event to ensure his qualification for Pan Pacs. Stanford’s Grant Shoults clocked a personal-best 3:48. 51 in prelims to qualify 2nd for finals; he will put up a fight for the Pan Pacs slot from lane 5. On Grothe’s other side will be Andrew Abruzzo from Plymouth Whitemarsh. He took 6/10 off the 3:49.19 he swam to win gold at 2017 Junior Worlds, qualifying 3rd in 3:48.58. Abruzzo is now the 5th-fastest American 400 freestyler in history in the 17-18 age group. DART’s Chris Wieser also qualified with 3:48, while Baylor Swim Club’s Trey Freeman went 3:49.0 this morning.

World Record holder Lilly King is looking to secure her spot on the Pan Pacs team; while she qualified third with 1:06.98, she went 1:04.13 at World Championships last summer and has been as fast as 1:05.61 this season. Tennessee’s Molly Hannis sat atop the leaderboard after morning prelims; she broke the 1:06 barrier for the first time going 1:05.78 and is now the 7th-fastest American ever in this event. 200 breast champion Micah Sumrall of Chattahoochee Gold put up the #2 time of the morning with 1:06.92. Katie Meili, the Olympic bronze medalist, was the only other sub-1:08 in the field. She qualified 4th with 1:07.17 and, along with fellow Olympian Breeja Larson (1:08.01), is after a spot on the Pan Pacs roster. Emily Weiss is back in the A final after her DQ was overturned.

Olympic gold medalist and defending champion Matt Grevers of Tucson Ford was the fastest 100 backstroker in heats with 53.30. Grevers won silver in this event at 2017 World Championships and is trying to secure his place on the 2018 Pan Pacs roster. Cal’s Ryan Murphy, who has already won the 50 back (with an American Record) and the 200 back at this meet, comes into tonight’s final with the 2nd time of the morning, 53.63. NC State’s Justin Ress, who was runner-up to Murphy in the 50 back on Friday night and also came to the wall under the American Record, qualified 3rd with 53.82. Cal teammates Daniel Carr (54.01) and Jacob Pebley (54.03) are also title contenders.

The 100 Breast is positively stacked. Literally the 8 best breaststrokers in the country, in one heat.

She is. They probably just got them mixed up.