Regan Smith Lowers Own 100 Back World Junior Record In 59.09 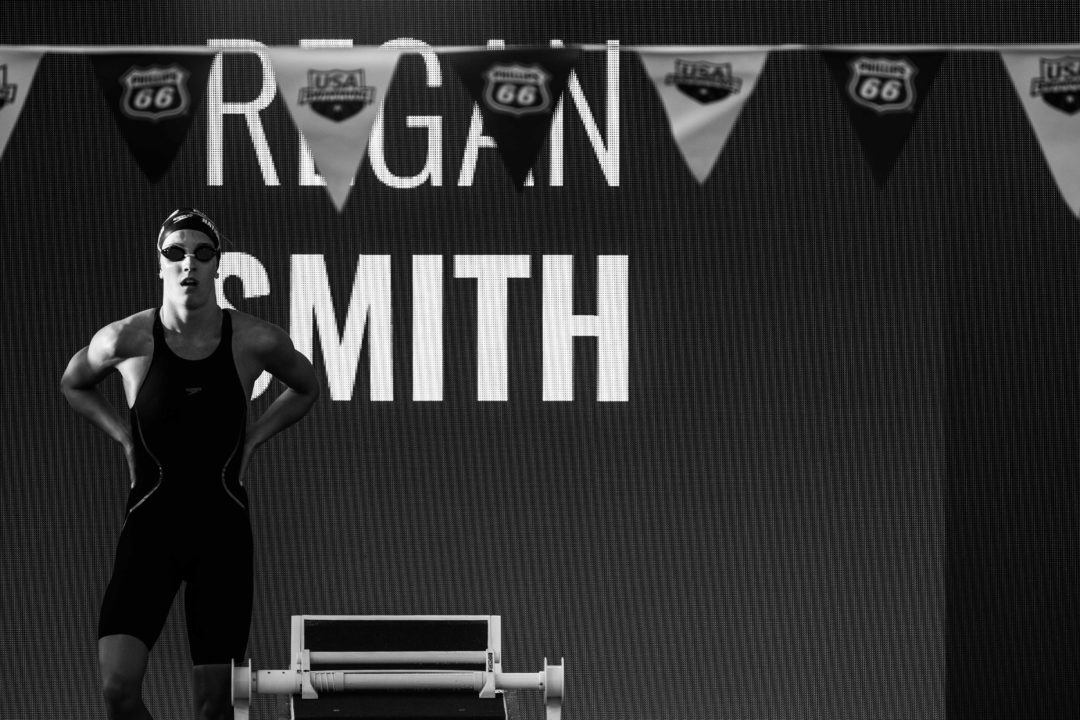 Without even swimming a best time, Regan Smith has broken the World Junior Record in the 100 backstroke. Current photo via Mike Lewis/Ola Vista Photography

Regan Smith continued her hot streak Saturday morning in Irvine, CA by lowering her own World Junior Record in prelims of the women’s 100 backstroke. Her time of 59.09 eclipsed the 59.11 she swam last summer at the FINA World Junior Championships in Indianapolis, IN.

The now 16 year-old actually swam 59.11 twice at World Junior Champs – once in the individual final where she won and again leading off the 4×100 medley relay where the USA took 2nd behind Canada.

Prior to Smith claiming the record, Canada’s Taylor Ruck temporarily held it with a 59.28 set in the semifinals of World Junior Champs. Ruck also dipped below the old record in finals (59.23), but couldn’t overtake Smith. Australia’s Minna Atherton held it before them with a 59.34 set in 2016.

Smith’s best time is 58.95 – also swum at last summer’s World Junior Champs, but FINA does not recognize leadoff splits on mixed medley relays for world record purposes. Thus, that time is unratified. Technically, Missy Franklin‘s American Record of 58.33 set at the 2012 Olympics is the fastest performance of all time by a 17&U female, but that came before FINA began recognizing World Junior Records, and so it is unratified as well.

Also of note, 15 year-old Phoebe Bacon of Nation’s Capital took the second seed behind Smith Saturday morning in Irvine with a blistering 59.12. With that performance, she passes Olympic champion Franklin (59.18) for #2 all-time in the United States 15-16 age group.

It is kind of interesting to see the men’s side, top seeded into the final is 33-yo veteran Grevers followed by 23-yo Murphy, very different picture there.

Probably because on men side the need for strength might be bigger.
Also amazing 2 girls on 58 tonight?

The women backstroke events are improving quickly someone soon will surpass Missy’s record in the 200.

And that new world junior record has been almost broken 4 minutes later with 15-year-old Phoebe Bacon who won her heat ahead of Kathleen Baker in a huge new PB of 59.12! Almost one second dropped! It was fun to watch that race. It’s great to be young and carefree. Regan looks old now compared to Phoebe Bacon, Katharine Berkoff or Isabelle Stadden. 🙂
And Gretchen Walsh swam 1.01.46 and Rye Ulett 1.02.46.
It makes Baker or Smoliga look like swimmers of the 20th century. 🙂
Good luck girls for the next olympic trials. It’s hard to believe that only 2 Americans will go to Tokyo in that event.

If there are so many very young girls swimming not far from elite level zone then it may have something to do with stroke itself. We don’t see similar picture with freestyle for instance.

well yeah. The event has evolved. It tells you the WR is soft. Not shocking as it was broken recently and many swimmers are within striking range.