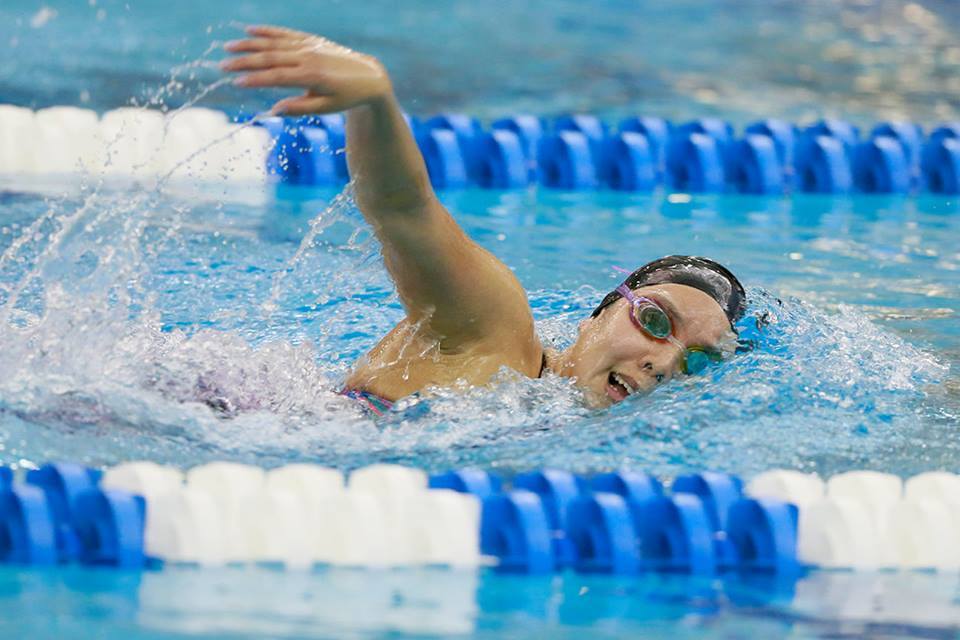 Kenyon freshman Crile Hart won her third event of the meet on Saturday with a 1:55.67 rout in the women’s 200 backstroke.

Andrew Greenhalgh, former NCAA National Champion and Record-holder from Johns Hopkins University, has shared his analysis of the women’s meet with SwimSwam. Here are his 5 Story Lines for the 2018 NCAA Division III Women’s Championships:

Denison, Williams, Johns Hopkins, Kenyon, and Emory round out the top 5, with Emory going for 9 in a row. However, Kenyon is within striking distance which could play into one of 5 narratives that could shape this year’s NCAAs.

1. Kustritz on the Brink of History

For the past three years, swimming fans of all levels learned the name Andrew Wilson. After a stellar junior season, Wilson went on to win US Nationals, shatter more NCAA records, and eventually claim multiple golds at World University Games in the 100 and 200 breaststrokes. As mentioned in the Men’s Fan Guide, a dominate force like Wilson has yet to re-emerge. But on the Women’s side, there is one swimmer who has been turning heads all year. KT Kustritz of Denison shattered the oldest women’s NCAA record in the 100 breast at the Miami (Ohio) Invitational in December, posting a 1:00.50. With 3 extra months of training under her belt, could we see the first Division 3 woman under the minute mark? Her progression since then suggests it could be a possibility. She has consistently posted 1:01s and 1:02s in dual meets, and her speed looks great. In a meet against University of Pittsburgh in January, Kustritz posted a blistering 28.11 flat start 50 breast, which at the time was the 4th fastest 50 flat start across all divisions. This then raises the possibility of seeing something even more impressive come in the 50 and 100 breast on the relays. With taper and the hype of a championship environment, look for Kustritz to shoot for monumental swims in the sprint breaststrokes.

While her sprint breaststroke has been dominant all year, Kustritz faces challengers in the 200 breast, to a much greater extent than in the 100. Leading the way is Kenyon senior Julia Wilson, the third-place finisher from a year ago. She comes in with a time, 2:14.09, which would have won the meet last year. But Kustritz is seeded right behind her and has posted solid times since midseason that indicate she won’t go down without a fight. Rounding out a tightly bunched 3rd through 5th spots is Caroline White (Williams) at 2:16.44, Emily Hageboeck (W&L) at 2:16.81, and Gwynnie LaMastra (Johns Hopkins) at 2:17.36. White and LaMastra posted those times at non-taper conference meets, so don’t sleep on them being potential players for the top spot in the 200 breast.

2. Can Anyone Catch Emory?

For the past decade, Emory women’s swimming has been nothing short of dominant in Division III. Last year was a microcosm of why that has been the case. They won all 5 relays, as they had the year before, and they consistently put multiple swimmers in A finals, even if they didn’t win the event. Depth has been the name of the game for Emory, and they seem ready to do the same this year by bringing the maximum number of swimmers. Senior Cindy Cheng leads the group with top times in the 100 back, 200 back, and 200 free, which not only makes her an individual threat, but a relay threat as well. Aside from Cheng, Julia Durmer and Fiona Muir also look to make big impacts as Emory goes for 9 straight. Durmer is the top seed in the mile by a significant amount, and Muir is seeded 2nd in the 50 and 3rd in the 100 (where she is the defending champion), as well as 6th in the 200, so look for her to play a significant role on relays.

Nipping at their heels, however, are the Kenyon women. After two decades’ worth of dominance, Kenyon’s title drought enters its ninth year. Will this be the year they reclaim the title? Based on psych sheet projections, they are just 33 points behind Emory, and they, too, bring the full force of 18 swimmers to the meet. As mentioned above, one of the ways to make up points on Emory is by disrupting their depth and relay dominance. Kenyon is seeded ahead of Emory in three relays, which if that holds up could make up crucial ground considering a relay win is 6 points more than a runner up finish. Down ballot swimmers will also have to step up big to prevent Emory’s depth from grabbing more points. In the mile, Kenyon has 5 women seeded to score or potentially score, led by former NCAA champion Marysol Arce. In the 200 back, it’s the same story, with freshman phenom Crile Hart taking the 2nd seed and Delaney Ambrosen commanding the 3rd seed. If these swimmers can swim at or exceed their seeds, Kenyon could be partying like its 1999, when they celebrated their 15th-straight NCAA title.

Much like last year, the women’s 500 could be anyone’s race. In 2017, Meg Stanley of Illinois Wesleyan took the top spot with a time of 4:50.76 in a shocking victory over swimmers from schools like Denison and Kenyon. Yet, the top 5 were separated by just 1.7 seconds. This year, the top 8 are tightly bunched again, which could make any one of the invited swimmers a contender in the race. Courtney Cowan (Johns Hopkins) appears to be the front runner, as she holds the top time of 4:48.50, a time that would have won last year by over 2 seconds. But Maria Turcanu (Emory) and Laura Westphal (Williams) are two underclassmen that could challenge, as they have not shown their true potential on the national stage thus far.

The 100 fly is a little different in that last year’s champion, Emma Waddell (Williams) returns as the top seed by almost a second. However, included in the mix of swimmers separated by just over 1 second from 2nd to 14th are 200 butterfly contender Anne Dassow (Grove City), former NCAA runner-up and sprint butterfly ace Anna Wisniewski (Johns Hopkins), last year’s third-place finisher Megan Campbell (Emory), and last year’s runner-up Niamh O’Grady (Wash. U). All swimmers need to be as sharp as possible in both prelims and finals swims. If not, there could be a ton of movement within the top 15, which could yield big finishes for medal hungry swimmers.

4. Small Schools Could Come up Big

In the men’s meet, Stevens Point could shine in the 200 freestyle relay by beating consistent powerhouses. While no women’s relay looks to be in contention outside of the usual suspects, there are several events where swimmers from non-contending schools could come out in a big way.

The 200 butterfly is an event that could have been penned as wide open if not for the intrigue it brings with Anne Dassow. With 2017 champion Megan Pierce gone, the 200 fly will see a new champion. Leading the way is Kailey Allen from MIT at 2:00.66. Right behind her, however, is Grove City sophomore Dassow at 2:01.10. She looks to become Grove City’s first women’s swimming national champion in program history, which could really help elevate the program on the national stage and bring in more talent like her. Furthermore, after finishing 29th last year, Grove City could rise significantly in the rankings if Dassow performs well.

The 100 freestyle offers a similar narrative. Following a 12th place finish last year, Calvin College is looking to crack the top 10. Top seed Abby VanHarn could become Calvin’s first national champion in over a decade. But she faces stiff competition from annual powerhouses like Kenyon and Emory. Hannah Orbach-Mandel is seeded second right behind her at 50.14, and returning national champion Fiona Muir is 3rd at 50.15. Because both these women swam these times at their midseason invites, they’ll be sure to drop from their seeds and challenge VanHarn for the top spot.

5. Records are in Danger

Almost every event this year has the potential to see a national record. Returning NCAA champion in the 50 free Emma Waddell (Williams) came excruciatingly close to Kristen Nitz’s 22.66 50 free record at last year’s meet, touching in at 22.69 for the meet record but falling short of the overall NCAA mark. Seeded at 22.98 following NESCACs, she’ll be in great position to challenge the record this year. Julia Durmer could challenge Sarah Thompson’s mile record of 16:21. She comes in at 16:36.20 from mid-season but swam a 16:27 last NCAAs to come within 6 seconds of the record. Kenyon freshman Crile Hart is within striking distance of Caroline Wilson’s 200 IM record of 1:58.81. Hart is seeded with a time of 1:59.70, already a full second ahead of the winning time from last year. She could certainly take home more than just gold in this race. Finally, Cindy Cheng could rule the backstroke races, seeded within a second of the NCAA record in both the 100 (54.16) and 200 (1:56.63). And as the top seed and defending champion in the 200 freestyle, she proves that she has both the speed and endurance to challenge both sprint and mid-distance backstroke records, and lead her team to yet another NCAA title.

The top women’s ten teams from the psych sheet, including distance events and relays, but excluding diving, are as follows:

I believe Peggy Whitbeck won at least one national title for Grove City in the early 2000’s.

2
0
Reply
R A
Reply to  CalebCourageCoughCough

2
0
Reply
CalebCourageCoughCough
Reply to  R A

My apologies! I must have missed that along the way. Thanks for pointing that out