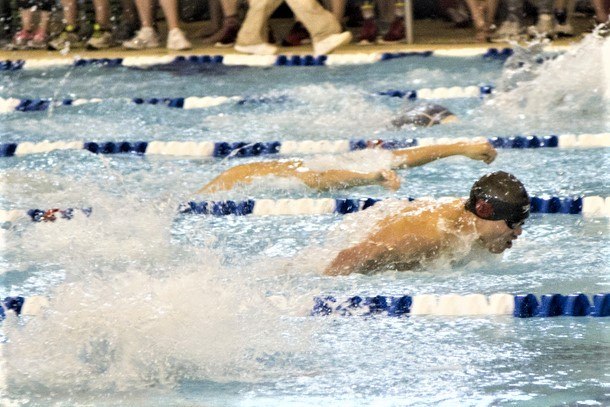 The 2018 NCAA Division III Men's Swimming and Diving Championships get underway tomorrow, Wednesday, March 21 at the IU Natatorium on the campus of IUPUI in Downtown Indianapolis. Archive photo via Sahil Patel/WUSTL Photos

Kenyon freshman Crile Hart won her third event of the meet on Saturday with a 1:55.67 rout in the women’s 200 backstroke.

The 2018 NCAA Division III Men’s Swimming and Diving Championships get underway tomorrow, Wednesday, March 21 at the IU Natatorium on the campus of IUPUI in Indianapolis, Indiana. Hosted by Indiana Sports Corp and Franklin College, the Division III Championships will feature 236 swimmers from 54 schools.

Andrew Greenhalgh, former NCAA National Champion and Record-holder from Johns Hopkins University, has shared his analysis of the men’s meet with SwimSwam. Here are 5 story lines for the 2018 NCAA Division III Men’s Championships:

To put it simply, last year’s senior class was monstrous. Graduating US National Teamer Andrew Wilson (Emory) would be a headline by itself. For both his junior and senior season (2015 and 2017), Wilson demolished the field and NCAA Records in both the 100 (50.94) and 200 (1:50.80) breaststrokes, while also taking home gold in the 200 IM with NCAA records (1:44.10). But Wilson is only part of the story. Graduating with him were faces like Evan Holder (Johns Hopkins), who broke the oldest NCAA record in the books last year in the 200 free (1:36.42) and challenged Wilson in the IM; distance juggernauts Arthur Conover (Kenyon) and Andrew Greenhalgh (Johns Hopkins), who won 3 NCAA titles a piece in the 500 and 1650 from 2015 to 2017, with Conover also becoming the first D3 man under the 15-minute mark in the mile; Michael Lageski (Wash. U St. Louis), who won the 100 breast as a freshman in record-setting fashion; Jesse Novak (Rowan), who won 3 NCAA titles in sprint free events; Jack Lindell (Denison), the 2016 NCAA swimmer of the year and multi-time 400 IM champion; and Benjamin Lin (Williams), who trounced the NCAA record in 100 back during his time as an Ephman.

Just two events bring back the defending NCAA Champion. One is the 50 free, where Emory supersprinter Ollie Smith will go for the 50 three-peat while taking a shot at Zach Turk’s legendary 19.38 50 free NCAA record. And with Novak graduated in the 100, Smith comes in as the top seed in that event as well, looking to grab some more hardware in his last collegiate meet. Brandon Lum (Wash. U) is the other returning champion, fresh off of his NCAA record in the 200 fly last year (1:44.56). While not top seed, the junior is in prime position to defend his title.

Who will rise to the occasion with the void left by such a monster senior class? Tom Gordon (Emory) looks to rise up to take over the distances races, after finishing 2nd in the 200, and 3rd in the 500 and mile last year behind graduated seniors. But Brandon Fabian (Johns Hopkins, 200 free top seed), Griffith Otazu (Johns Hopkins, 500 free top seed), Matthew Hedman (Denison, 1650 second seed), Connor Rumpit (Kenyon), and Mark Hallman (Pomona-Pitzer) could get in on the action as well, as they all boast nationally ranked times in the mid-distance to distance free events. These will certainly be exciting races to play out.

With Ben Lin gone, the backstrokes and 100 fly are wide open. Sage Ono (Emory) broke out as a freshman last year, setting NCAA records as Emory’s backstroker on their medley relays. However, Carson Clear (Denison), Ben Baturka (Kenyon), Kingsley Bowen (Tufts), and Emile Kuyl (Johns Hopkins) round out a tightly-packed top 5 in the 100 backstroke. The 200 back will be even more interesting, with new faces like Peyton Wilson (Wash. U) and Patrick Wilber (Whitworth) looking to take the reins. In the 100 fly, it’s the same story. The top 10 spots are separated by just 0.49 seconds, led by Kenny Fox (Denison), Mark Wilson (Johns Hopkins), and Nate Kozycki (Albion), all of whom are upperclassmen looking to make their mark.

In the 200 IM, Kevin Van Cleave (Wash U) is the top dog thus far this year, but Bouke Edskes (MIT), who placed 5th behind 4 seniors last year, could look to make a move coming in as the 7th seed. The 100 breast is perhaps the most intriguing race, however. The top 6 swimmers come from teams who did not place in the top 10 at last year’s NCAA championships, meaning this race could be monumental for many programs looking to build on the national stage. Lukas Menkhoff (Pomona-Pitzer), Sam McManus (DePauw), Tanner Sonnek (Gustavus), Reona Yamaguchi (Chicago), Tyler Thompson (Baldwin Wallace), and Collin Miller (UW-Eau Claire) round out the top 6.

The NCAA announced just days after the invite lines were released that Amherst would be withdrawing all 9 of their swimmers from the men’s meet due to violation of team rules concerning alcohol consumption. This move has all sorts of ramifications on the meet. Let’s look at how it impacts individual swims first. The biggest impact comes from the absence of Sean Mebust, who was seeded second in the 200 breast (2:00.09), within striking distance of Sam McManus of DePauw (1:59.86). While the 200 breast was already wide open, with the top 16 entries only separated by 2 seconds, this removes a contender for the national title, slightly increasing everyone’s chances of vying for that top spot in the race. This would be huge considering Denison, which has 2 swimmers seeded to make the A final in the race, could make up valuable points on title contenders like Emory, Kenyon, and Hopkins, which lack the same depth in the event. And that brings us to the team impact outside of this one race. By dropping 9 swimmers from the meet, the NCAA picked up 9 swimmers from the alternate list, to include 2 from MIT (Connor Sweeney 200 fly and Justin Chiu 100 breast). This is a significant pickup for the Engineers, who consistently battle for the podium status with Johns Hopkins, Emory, and Wash. U. And based on the scored psych sheets, Pomona-Pitzer figures to play a role in the race for the podium as well, making two potential finalists all the more valuable. Plus, additional added swimmers from non-contending teams could pick off points from contending teams, which could add even more suspense to the team tallies.

Big-time Division 1 transfers have the potential to light it up come Wednesday. Ian Rainey (NYU) swam for Michigan and was a D1 NCAA qualifier in 2016 after placing third at B1G in the 400 IM. Now, as a senior, he is top seed in the 400 IM by 4 seconds, and is within striking distance of Harrison Curley‘s NCAA record of 3:46.62 (coincidentally, another D1 transfer). While he has yet to bring home gold for NYU, defending champion Jack Lindell of Denison graduated last year, making Rainey’s path to the title significantly easier. He is also slated to do significant damage in the 200 fly, so look for NYU to rack up significant points from Rainey. Next, Johns Hopkins brought in a pair of transfers that have made quite an impact this year. Brandon Fabian, a sophomore previously enrolled at Virginia Tech, has made significant improvements in the 100 free and 200 free this season. He is the top seed in the 200 freestyle at 1:37.42, and is 5th in the 100 at 44.29, plus an 11th seed in the 500. Alex Carson, a junior from LSU, has been a huge boost for the Blue Jays in the sprint frees. A 20 point and 44 100 freestyler, Carson brings depth to the 200 and 400 freestyle relays, that, along with Fabian, make Hopkins a threat in the freestyle relays.

And, while not entered in the meet, it is worth noting the transfer of Zu Pigot to Whittier College in the fall. The former UNC swimmer shattered Whitter records in his first dual meet, and worked his way down to near a collegiate best in the 100 fly (47.71) at the Logger Invitational. His 100 fly time was the fastest, and still is, the fastest in Division III this year. Yet, his absence from competition following the meet all but indicated that an NCAA appearance would be unlikely. Still, the presence of Pigot, Fabian, Carson, Rainey, and other transfers like Peter Conzola from Virginia Tech, Giorgio Delgrosso from Florida State have helped raise the profile of Division III swimming, and aid in its progression to close the talent gap with Division I and make it an attractive option for prospective student-athletes.

The absence of Andrew Wilson doesn’t make the medley relay sweep for Emory any less likely. Despite Wilson playing a big role, Ono, Smith, and Cooper Tollen all excelled on the medley relays last year, and return for more. Smith is most notable for being a consistent 18-point relay swimmer, which is a threat no matter who is swimming breaststroke. They won’t be without challengers, however. Denison, Johns Hopkins, and Stevens Point join Emory in the 1:28 club this year. With the four teams separated by just 4 tenths of a second, expect the margin of error to be very tight across the board. The same teams are in play for the 400 medley as well, although Pomona-Pitzer joins the party behind Menkhoff and Hallman. They are seeded second.

In the 800 free relay, expect NCAC rivals Kenyon and Denison to spar in a battle for the ages. Kenyon especially brings an absurd amount of depth not seen before at the Division III level. At their midseason meet, Kenyon had 7 swimmers split under 1:39 in the 200, and has 4 of the top 8 seeds in the meet, making their relay options vast and dangerous.

The most intriguing relay, however, is the 200 freestyle relay. Coming in as the top seed is University of Wisconsin-Stevens Point with an impressive 1:19.58 (fun fact: because this time was done a week before B1G, for a week the UW-Stevens Point 200 free relay was faster than the actual D1 University of Wisconsin). Led by Jack Englehardt, Sam Jekel, Brandon Richardson, and James Donnellan, Stevens Point could pull off a stunning relay victory over annual powerhouse teams like Kenyon, Denison, MIT, Hopkins, and two-time defending champion Emory. It wouldn’t be without precedent, though. In 2014, TCNJ won the 200 and 400 freestyle relays, and followed up with a shocking 800 freestyle relay victory the next year, while tying University of Chicago for the 400 free relay gold. Despite it happening in relatively recent memory, relay victories by outside teams are great for the expansion of the sport and will be one of the many exciting things to watch for at this installment of the NCAA Division III Swimming & Diving Championships.

The top men’s ten teams from the psych sheet, including distance events and relays, but excluding diving, are as follows:

Awesome write up. Overall I think the most exciting aspect of this meet, as is also the case in D1 men’s this year, is the very close team matchup. These top 6 teams are all very good. I actually think MIT could end up challenging for a title and they are ranked 6th on this psych sheet! Incredible. Can’t wait to watch.

Has it ever happened that Pomona-Pitzer has finished ahead of C-M-S at nationals?

Fun fact:
The two pools of these two teams are literally two blocks away from each other.