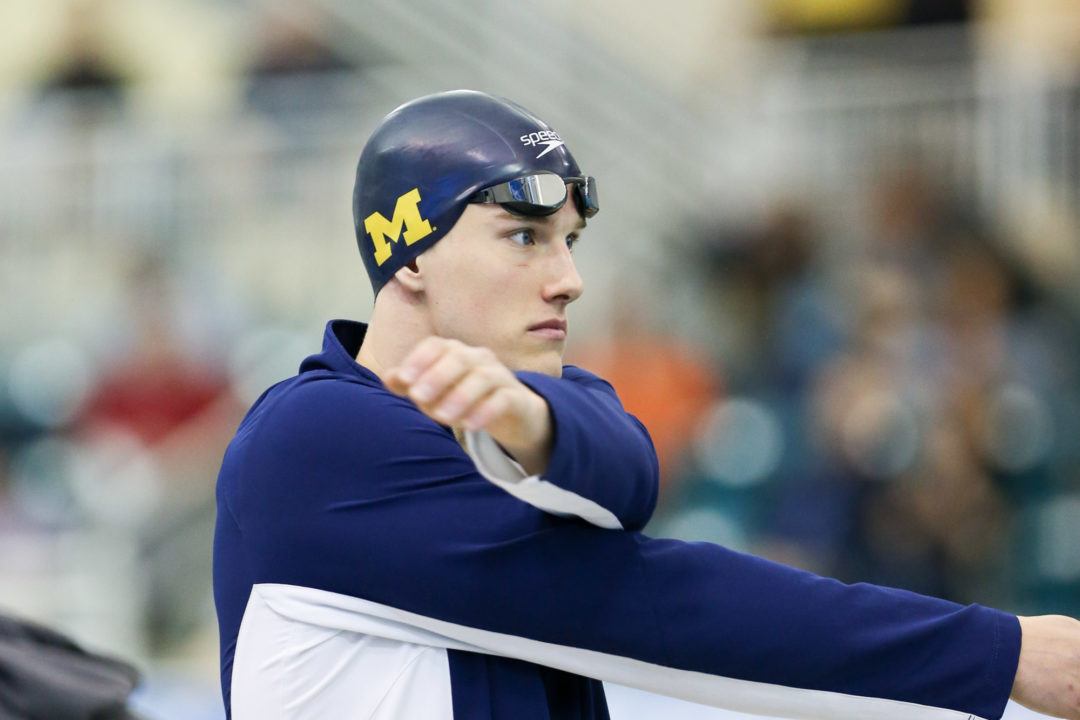 "He is so invested in your personal development," senior Paul Powers says of his Michigan coach, Mike Bottom. Archive photo via Tim Binning/TheSwimPictures.com

On the eve of the 2018 Men’s NCAA Division I Championships, take a listen to how Michigan senior Paul Powers reflects on his Big Ten career, one in which he claimed 8 conference titles, a school record, and multiple NCAA finals appearances. The sprinter is set to compete in the 50 free and 100 free individual events in addition to Wolverine relays in Minnesota this week.

“There is nothing better than my collegiate career,” is how the Georgia native describes his sentiments of his Ann Arbor teammates, a training environment which he says is totally focused on ‘the team’. Powers says he moved from being ‘me centered’ pre-Michigan, to focusing more on how the upper classmen’s legacy will impact the younger guys on the team.

Powers also describes what it’s like developing and growing under Head Coach Mike Bottom, who has just been named B1G Coach of the Year for the women’s team. “He is so invested in your personal development,” says Powers. “He is a very unconventional coach who is always looking for things that work.”

The respect is mutual, as Bottom says Powers, last year’s 8th place finisher in the men’s 50 freestyle at NCAAs, “is the epitome of what a champion is in this program.”

See a snippet of the conversations below, and watch the full video here.

What's the relationship like between sprinter and sprint coach? One of the fastest men in Michigan history, Paul Powers, explains it here.

Check back tonight for our full feature. #GoBlue pic.twitter.com/oG9lmE6Yua

That’s great. Mike Bottom is a fantastic coach. As good as he is, I wonder if it proves difficult to recruit people to Ann Arbor, when his recruits have the choice to spend four years in Southern California, Florida, or central Texas.

He can lure them there with the benefit that Michigan is one of the top schools in the nation and has one of the biggest alumni world wide. It’s not a 4 year decision, it’s a 40 year decision.

I have yet to meet a HS kid that thinks of college as a 40 year decision.

I would rather spend four years in Ann Arbor than Florida or Texas for sure, and probably Southern California

@Dude have you been to Florida????? It’s really nice lol