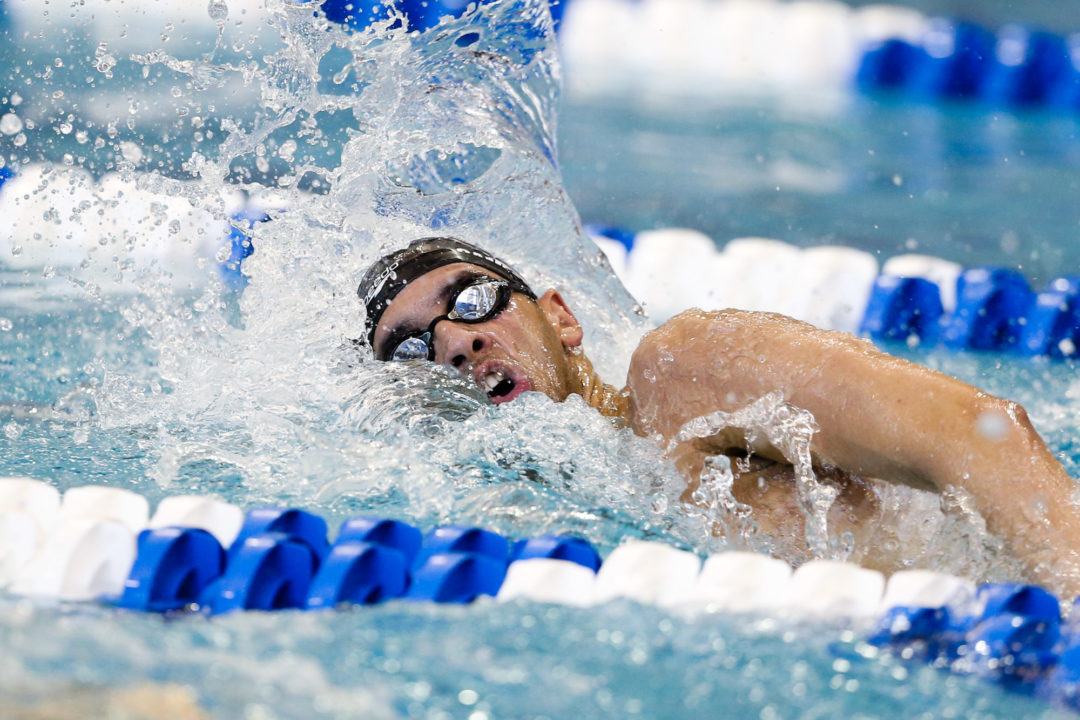 He's been so close for two years in a row, and this year, he's gunning for the crown. Archive photo via Tim Binning/TheSwimPictures.com

The mile was a fantastic race last year, with Clark Smith getting to the wall just ahead of Northwestern’s Jordan Wilimovsky, Michigan’s Felix Auboeck, and South Carolina’s Akaram Mahmoud with a new NCAA, American, and U.S. Open record of 14:22.41.

It wasn’t the first photo finish for Mahmoud, who was touched out at the wall by Penn’s Chris Swanson at the 2016 NCAA Champs. He’s been so close for two years in a row, and this year, he’s gunning for the crown. Mahmoud is seeded 4th going into NCAAs with a 14:37.01, but the race will likely be a rematch with Michigan’s Auboeck, as he and Mahmoud are the fastest in the field by a considerable margin. Auboeck is the 2nd seed with a 14:34.10, while NC State’s Anton Ipsen‘s 14:31.21 leads the way going into the big meet.

Four freshmen sit inside the top 12 seeds currently. Third seed Zach Yeadon from Notre Dame has had a fantastic first NCAA season, dropping his best from 14:49.90 down to 14:34.60 in a single year. Mexican national and Michigan first year Ricardo Vargas sits 7th (14:40.30), while highly-touted recruit and Cal Freshman Sean Grieshop is 1oth (14:43.35) and his Bay Area rival Johannes Calloni of Stanford is 12th (14:45.80).

A newer name to the top 10 is Cal junior Nick Norman. Last year, Norman finished 2nd to last at this meet, more than thirty seconds outside of scoring. He was 9 seconds out of scoring as a freshman, but at both of his NCAA meets thus far, he’s added. He’s been 14:39.77 this year, though, wildly ahead of his 2016 collegiate best (14:51.89) and much faster than his high school best (14:50.78). The tides may be turning in Cal’s favor– with Norman and Grieshop in the top ten, we could see not one, but two Bears scoring in the mile, which has been one of their weakest events in recent memory.

DARK HORSE: Jacob Wielinski of Mizzou. Wielinksi is seeded 11th with a 14:44.24, but the transfer out of North Dakota has seen big drops this year and was pretty much unknown until this season. He’s the fastest Mizzou swimmer, ever, by a landslide in this event, and he could have more to drop come NCAAs.

I think a lot of people are sleeping on Ipsen. He has the fastest 1000 time in the country this season.

Ipsen for the win

You heard it here first, Anton Ipsen for the win! N.C State women’s distance crew at ncaa’s put two in the top eight and one in the next eight. Each of these women dropped 6 seconds or more, for Lifetime best times. We are going to see a big drop from Ipson, who was unrested at his conference meet and is a hungry senior. Gary Taylor is a genius distance coach!

He’s probably going to need to drop 10 secs off his best time. Do you expect him to do that?

Yes, I do. He’s been swimming great and unshaven all year.

He’s always been fastest in-season and not as much drop with taper, but he’s sure been having a great year, won’t be a shock if he’s right there at the end.

SwimSwam, you should make an article of all the best dean Farris meme comments

That kind of article would hold unbelievable power… It’s likely it would cause the site to crash.

None of them can probably touch the AR, but since theyre not American it doesn’t matter much. My money is on Aubeck. He is looking good this year.

The dude knows how to go for it, that’s for sure.

Looks to be a two man race between Mahmoud and Auboeck. I can’t see anyone staying with either of these two.

Ransford but he’ll die off the last 500 when the other maintain their paces or even get faster.

It’s tough to imagine a better race than last year, but with Auboeck and Mahmoud returning it’s shaping up to be another great one! I wouldn’t be surprised to see them under 14:20.

I also wouldn’t be surprised to see Ransford in the thick of things this time. He always makes his move at some point in the middle of the mile and he’s faded in his recent races (’17 NCAAs, ’17 Nationals, etc.), but he seems to time his move better and better each time. This time I think he’ll be close to nailing it; I think he’ll be around 14:25 or so, right ahead of (or right with) the rest of the field.

Problem with PJ this time around is that he will not be in the final heat, so his strategy will be harder to do if he can’t see his main competition.

2
0
Reply
JP input is too short
Reply to  BSD

He’ll have Almeida and Bekemeyer in his heat, that could definitely be a race.