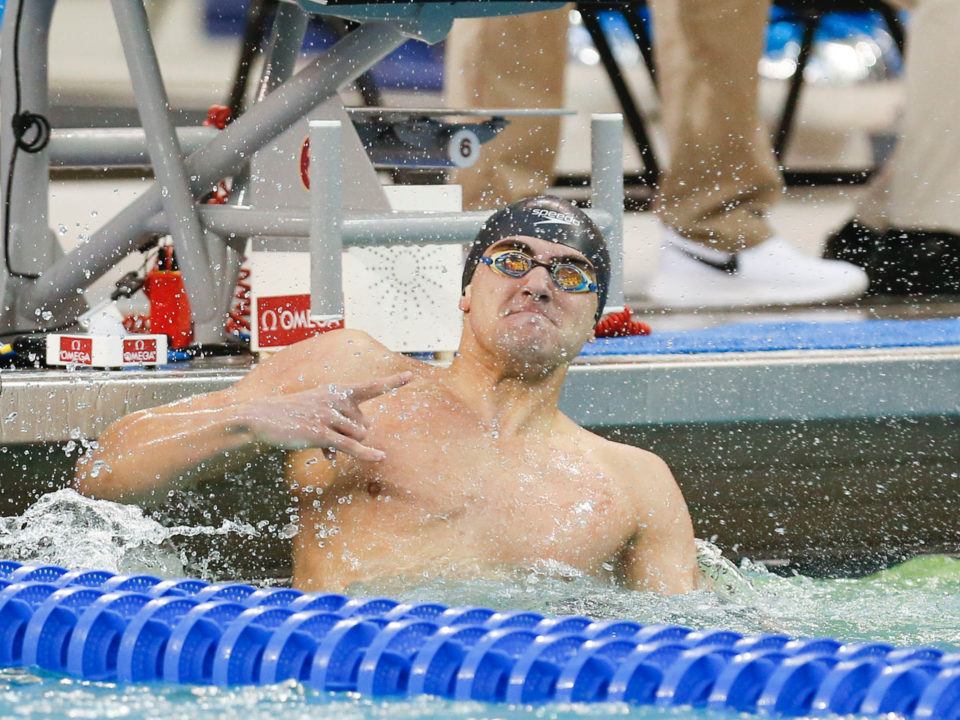 Austin Katz became the first high school Class of 2017 grad to win an individual NCAA title, and more than half of our top-20-ranked recruits scored significant points at the 2018 NCAA Championships as freshmen. Current photo via Tim Binning/TheSwimPictures.com

We’ve taken a pretty deep dive back into years-old recruiting ranks over the past two days, and we have one more piece of that puzzle to reanalyze. Luckily, the ranking we’ll revisit today is much more recent: how did our top 20 recruits in the class of 2017 perform as freshmen?

The ranks are from our top 20 story from July of 2016. Bear that in mind – a lot of these ranks would have changed if we had ranked them in July of 2017, after their senior years. Our recruiting ranks also only include domestic athletes, as international students are often hard to group into a specific recruiting class, and are generally shrouded in mystery as to when they’ll join an NCAA team, if they do at all.

And of course, we’ll include everyone’s favorite part: which unranked recruits scored NCAA points as freshmen.

These don’t include relay contributions.

“Taylor had a better senior year of high school but Katz clearly had the better freshman year in the NCAA. That’s somewhat to be expected, given freshman seem to be more plug-and-play in Texas’s system, while Florida’s program usually has a pretty steep adjustment period.” Any insights into why this is the case? Is it due to Troy’s infamous high-yardage program? Though according to Texas’s dual meets results (and the swimswam comments on them) Eddie works his swimmers incredibly hard as well. Does the steep-adjustment at Florida related to the enormous combined team and possibly less personalized training, support, etc?

Cal and Texas seemed to do well overall.
Stanford and Harvard, not so much.

It is awesome to see the “unranked” guys deliver at NCAA’s!

Yep. Though he’s not a freshman, Towson’s Jack Saunderson is an awesome story of hard work, good coaching and late-blooming talent.

#3’s best times are from sophomore year of high school. That seems ominous.

Rankings really should weight recency of times. On the other college website, which is a fantastic resource, there are highly ranked kids this year that don’t even swim the events that got them ranked in the first place (particularly distance). It even happens on the super-elite level, like Jack Conger and backstroke (I realize its not a perfect example because it happened in college).

Not a good comparison. Dressel won the 50 as a freshman. No matter how you look at it no matter how fast you were to begin with not improving is definitely not a good thing. Especially when you’re not even really anywhere near your best time.

Zarian of Harvard missed his taper meet this year due to appendicitis – hence no time drops. That means his improvement in the 400 IM was in season

I was wondering why he wasn’t on the Ivies team after swimming well at HYP.

In defense of Texas and Cal, as great as it is to always get the top recruits, it’s also very difficult to get those top end recruits to improve. Dressel, Nolan, Schooling, Murphy, Conger, and Hoffer all had NCAA final times as HS recruits. All got much better in college (jury is still out on Hoffer), but when you’re already extremely fast in HS, there’s only so much more time for you to drop. Other than Dressel of course.

And remember, Nolan didn’t have that great of a freshman year given the times he came in with. Texas didn’t figure out that Conger was a butterflyer his freshman year. Dressel missed the 100 free A finals. Sometimes it just takes a bit for swimmers to adjust to new coaches and vice versa.

Did Schooling get better? I looked at his point totals from Freshman year through Sr year and they went down each year. All the way down to 19 for this year… maybe he improved that first year, but after that I would say he did not (one LCM swim at the olympics aside… which was 2 years ago and he hasnt touched that time since).

NC State has to be in there.

Yeah like at 1 if we’re talking about only swimming.

Look forward to how this very good class does in the coming yrs. Scoring wise it seems to separate between TX and Cal, so how will they do as they move forward?