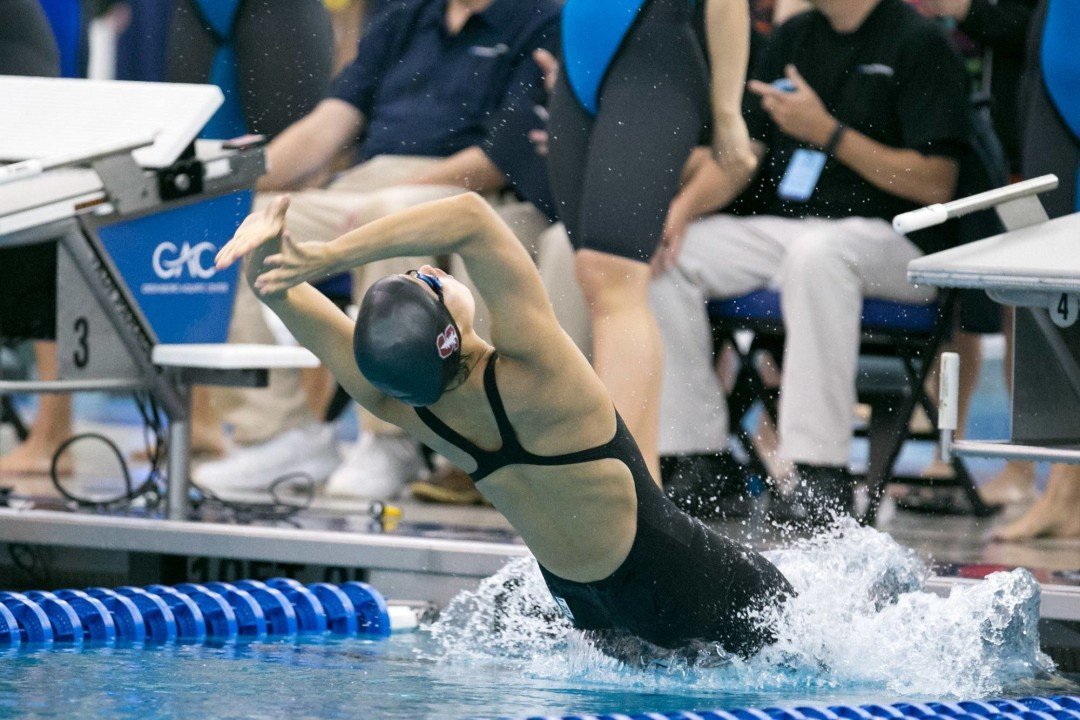 We ranked Stanford's class #1 back in the summer of 2014, and guess what? They delivered. Top-10 prospects Simone Manuel, Janet Hu (pictured), Ally Howe and Lindsey Engel averaged 100 individual NCAA points just between the four of them. That means without even considering relays, that quartet could have placed inside the top 15 at NCAAs every year of their career. Archive photo via Tim Binning/TheSwimPictures.com

Every summer, we rank down the top recruiting classes snagged by each team.But what do those rankings look like four years later, when each swimmer has had an opportunity to complete a full NCAA career of competing and scoring?

Back in July of 2014, we ranked out the top 12 recruiting classes nationwide. You can look back on our ranks here:

We’ve republished each of the 12 classes below, verbatim from how they were listed in our 2014 post. Then we tracked down some stats on each class, plus a short analysis of each class along with any extra swimmers who wound up being part of the class.

At the time, we noted this class was outside our top 20 before adding House late. (Some might remember House, who verbally committed to Virginia, de-committed and signed with Notre Dame, then ‘re-explored’ her options and fell in love with Duke, getting a full release from Notre Dame without swimming a day in South Bend. She would go on to swim one year with Duke and then transfer). So when House transferred out to Purdue within the first year, it’s no surprise this class fell back to earth.  Leah Goldman did score at NCAAs as a senior, and Targonski scored as a diver during her career.

Baldwin didn’t score until her junior year, but ultimately ended up one of the more productive swimmers in her class nation-wide. Both divers added some points, but the rest of the swimming class ultimately didn’t make any NCAA waves individually.

Rebecca Millard was a three-year individual scorer who powered Texas into the top 10 in three of her four years. Mimi Schneider was a valuable relay swimmer. Leap, one of the best breaststrokers in this recruiting class, ended up transferring out to Gardner-Webb. Couch transferred to Purdue, where she did qualify for NCAAs one season.

Grover ultimately scored at NCAAs her senior year. She and Kaunitz were part of several relays that set school records and scored at NCAAs. Quinn transferred to Duke, where she was an ACC scorer.

Zeiger was on pace to be one of the class’s best swimmers, scoring 39 points through two years before struggling with medical issues later in her career. Nack never scored individually (though she finished 17th at least once), but finished as the fastest flyer in school history and ran up a lot of NCAA relay points. Lorentzen dropped off the roster after a few seasons.

This class yielded some massive NCAA points, transitioning A&M from the Breeja Larson years into an era of sustained success. Galat was the 2nd-highest scorer in the entire class. Bratton was the highest scorer outside our top 20 ranked recruits. A&M also got almost 100 individual points out of French addition Beryl Gastaldello, who turned out to be one of the most productive swimmers in the class. They would also get scorer Jorie Caneta in as a transfer from Arizona State.

Goss was one of the more productive international additions. Rockett ultimately scored double-digit points as a senior and was a key relay swimmers. The rest of this class did have a pretty good relay impact: Vertigans, Chamberlain, Barnard and Spears were all NCAA relay scorers.

Miller was the centerpiece of this class, and she ultimately didn’t wind up swimming a yard in competition for the Tigers. She competed at the club level the summer after her freshman year, and hasn’t competed since. Welshofer improved some of her times, but not the fly times that really made her a standout recruit. Marsteller struggled with injuries most of her career, but did finish out all four years of competition, as did a large portion of this big class.

More than half of this class turned out to be very high-level NCAA swimmers, but only one continued to score through her senior year. Canadian flyer Noemie Thomas was as advertised in recruiting, scoring 79 total points and contributing about 20 points like clockwork each of her sophomore, junior and senior years. She was part of an NCAA title-winning relay and helped Cal win the NCAA crown as a team in 2015. Runge was a huge part of that title effort, scoring 49 points, but she later transferred out to Wisconsin and is now transferring again to Arizona State, where she’ll have one year of eligiblity remaining. Mau scored 10 points as a freshman but regressed each year after that.

Here’s a crazy stat: Kylie Stewart ultimately never bettered the amazing 1:49.8 200 back she put up as a high schooler in 2014… and she still wound up one of the most productive swimmers in the class with 63 NCAA points and a national relay title. Just more proof that even if they plateau, recruiting elite high school swimmers is the best way to build a roster of elite college swimmers. Raab and Kingsley each scored points in all four of their college years as well. Peters qualified for NCAAs as a freshman but was left home when Georgia was up against its 18-athlete roster cap. She came back the next year to score a point in Georgia’s upset NCAA win over Stanford.

G Ryan scored 65 points over her four years, and Clara Smiddy scored 56. And we didn’t even include late class addition Gabby Deloof, who would score 28 over the course of her junior and senior years. Kopas scored as a freshman. Moore would go on to be the most productive of any of these swimmers, but she did it for NC State, where she transferred after her freshman season.

The trio of Manuel, Hu and Howe combined for the most NCAA titles of any swimmers in this class. Manuel won 6 individually and 8 on relays, Howe 1 individually and 7 on relays and Hu won 10 relay titles. Engel also chipped in one. (The diver Leydon-Mahoney also won a national title on the boards, though she missed much of her junior year and all of her senior year with injuries.) Over the course of their four-year careers, that foursome of Manuel, Hu, Howe and Engel scored massive individual points, too: 169 for Manuel, 112 for Hu, 88 for Howe and 32 for Engel. Combine all of those and spread out over four years, that quartet of women scored an average of 100.2 points per season – that’s enough to finish inside the top 14 with just the four of them and no relay points considered.

The far left column tracks their individual ranking in our top 20 recruits post. HM means “honorable mention,” or those ranked between #11 and #20. UNR means “unranked” and INTL means “international”, as we don’t rank international swimmers in our top 20 post.

I’m sorry but Hanna House transferring to Purdue shouldn’t have made Duke “fall back down to earth”.. if I’m not mistaken, she didn’t get remotely close to qualify for NCAAs during her collegant career. She shouldn’t have been the reason they were ranked so high to begin with. Duke women qualified 7 individuals this year, the most in program history. That’s already a huge improvement in just four years.

What Greg and Tracy are doing at Stanford is extraordinary. Kudos to them for not just bringing in incredible talent but maximizing performance. It’s going to take a Herculean effort from another program to knock them off the mountain top, at least in the short term.

As far as A&M goes, it seems that no matter the recruit from high profile like Galat or Pickrem or Adams to lesser knowns like Rasmus or Gibson or Larson he helps them achieve big things. There are other coaches who do that for sure, but Steve just does it so regularly it might be taken a little for granted.

This illustrates why I do not understand how Steve Bultman does not win coach of the year. He doesn’t get the top recruiting class, and he is at a huge disadvantage being in College Station (no offense to the aggies, but almost anyone would choose sunny California or even Austin over a small rural college town).

Steve’s recruiting classes don’t get the headlines or hype that other top schools get, yet A&M is consistently one of the top 4 programs at NCAAs. That’s not by luck; that’s by coaching, and the numbers show that Steve Bultman is simply outcoaching “hyped” programs year after year.

Agree in good part; the success there is remarkable. Just a nit-pick: Bryan-College station population is 255,519. For a lot of us that’s a long way from a “small rural college town”.

Because Meehan developed Eastin, Drabot, Manuel, Hu, Howe, and many others very well. Yes they were all elite recruits, but that doesn’t take away from the absurdity of some of the times they’ve posted. Look at Kylie Stewart, an elite recruit who didn’t develop and got outperformed by developed recruits. Just because Meehan starts with talent doesn’t mean it’s easy to get them to improve. Bultman is good, but Meehan and Stanford this year were phenomenal.

What about Valerie Hull as a transfer to Cal?

She was a national champ on a relay, but wasn’t an individual NCAA scorer. We tracked her progress in our individual recruits story linked at the top.

It would be interesting to see the class re-ranked based on ncaa points. Would Texas A&M have had the number 2 class of 2014?

When you include transfers and internationals, they would.