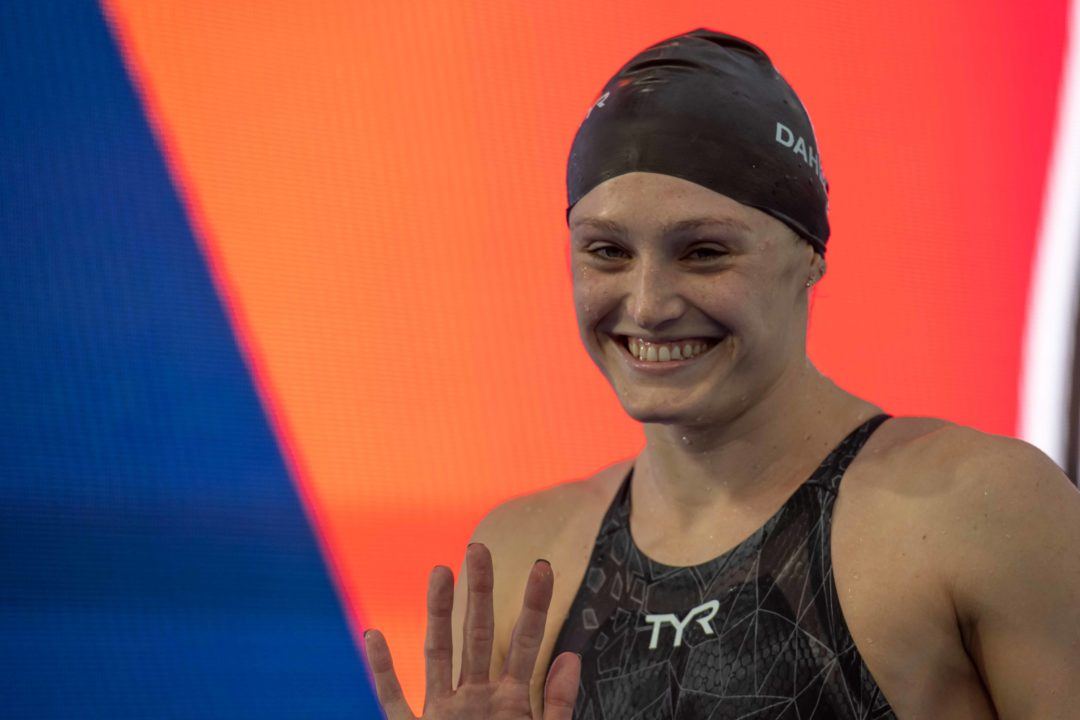 Kelsi Dahlia is among the Americans set to compete at the next FINA World Cup stop in Eindhoven, starting on September 28th. Archive photo via Mike Lewis/Ola Vista Photography

Sweden’s Sarah Sjostrom hit max points at each of the first two stops of the 2018 FINA World Cup, earning the $50,000 Cluster 1 bonus and leading the series points by 30. On the men’s side, Russian breaststroker Anton Chupkov has a narrow 3-point lead over American Michael Andrew, with Vladimir Morozov next in line. All are slated to be back in action at the first stop of the 2nd cluster, which takes place in Eindhoven, Netherlands September 28th-30th, but will have additional company this time around.

Whereas both Kazan and Doha saw just one Brazilian competitor in Felipe Lima, this time he’ll be joined by 3 additional teammates, including Eteine Medeiros. Australia is following suit, with cluster 1’s sole competitor, Mitch Larkin, expected to have teammates Mack Horton, Emily Seebohm and Zach Attard join him in Eindhoven.

Spain, Japan, and Finland will also be sending contingencies to spice up the competitions, which means we’ll most likely see a few Katinka Hosszu (HUN) versus Mireia Belmonte (ESP) battles. Ari-Pekka Liukkonen should bring some heat to the men’s sprints, while Japan’s flymeister, Daiya Seto, will look to take on South African Chad Le Clos in the 200m fly.

Le Clos is set to be flanked by sprinter Brad Tandy and fellow flyer Ryan Coetzee, who made it onto the podium twice in Doha.

Russians Yulia Efimova and Kirill Prigoda are also present on the start lists, as is a large Dutch squad led by Olympians Ranomi Kromowidjojo, Femke Heemskerk and Ferry Weertman.

French-trained Oussama Sahnoune of Algeria is expected to race, following his tremendous performances at the 2018 Mediterranean Games. He threw down a 21.96/48.00 free double to notch 2 new national records in Terragona back in June. Mehdy Metella of France should also be in the men’s sprint free and fly fields.

As a reminder, whereas cluster 1 was contested in long course meters, the remaining stops of the entire World Cup Series will take place in the short course meters format. 12 events will be raced on each of the 3 days in Eindhoven, per the schedule below.

I’m sorry for Katinia Hosszu. These damn Americans will spoil such a nice golden party. Of seven gold medals in Doha 800 and 400 will go to Smith, 100 and 200 back will be taken by Baker, Dahlia will say ‘no’ in fly races and Katinka has to try relay hard to beat Margalis in both IM events. Would it be the first World Cup’s stop where ‘iron lady’ gets no gold medals?

400 IM will be Hosszu VS. Belmonte, the latter broke the SCM WR last year.

And she almost always only shows up when she can beat Katinka for whatever reason. Not sure if it’s mind games or just coincidences. I feel like Belmonte might be one of the swimmers with actual good head to head record versus Katinka.

Belmonte’s programs are usually much more “ironner” (in yardage and complexity) than the Hosszu’s one and are performed in stronger manner. Nevertheless she never calls herself with some stupid names. That could be the reason to contest Hosszu. I also noticed that Pellegrini is also taking competition with Hosszu seriously no matter how local or intermediate a meet is.

Hosszu is a notch above everyone in 100IM going in. Sjostrom was in the form of her life(and is the all-time 2nd in the event) last season and Hosszu still somewhat comfortably won the event. Sjostrom is not as good this year, not in long course anyway.

However, Hosszu has not made times close to her personal bests herself this season. So she could be there for the taking if someone shows up in 57 territory. But she’s just so damn good in SC with all the underwater work and you can get away with worse form.

Not sure how good all these Americans are in SCM, but sure feels like they should be winning many of her events.

100IM goes right after 400 free where will be Leah Smith who was exceptionally good (under 4:29) in 500SCY. So it is either Hosszu takes easy in 400 free race accepting Smith’s leadership or she won’t be that good in 100IM.

I wouldn’t use the expression like “her events” but would rather say “events where she wasn’t contested”
Her events were 200 and 400IM events where she was dominant in 2013-2017 seasons. This year it will be the first time when she races against strong field that includes Spanish, Japanese and American good IMers. Let’s see if IM are still “her events”.

Are there any restrictions of who can participate in World Cup competition?
Does the hosting country have some advantage?
Here are largest teams:
NED – 48 swimmers
RSA – 11 swimmers
CHN – 11 swimmers
JPN – 10 swimmers

Of special interest will be the performance of Wang Jianjiahe in SCM events. She is the strongest Chinese female swimmer. There is already some understanding of what kind of swimmer this 16 year old 6 feet tall girl is in long course. Is she same impressive with walls and underwater?

If there is that would be stupid as heck, because the sizes of the fields are a joke for the most part.

Good to see more Americans participating. They are good short course swimmers so they should fare well. I hope they are doing both meets in this cluster.

It is the start of the pre-championship game warm up.