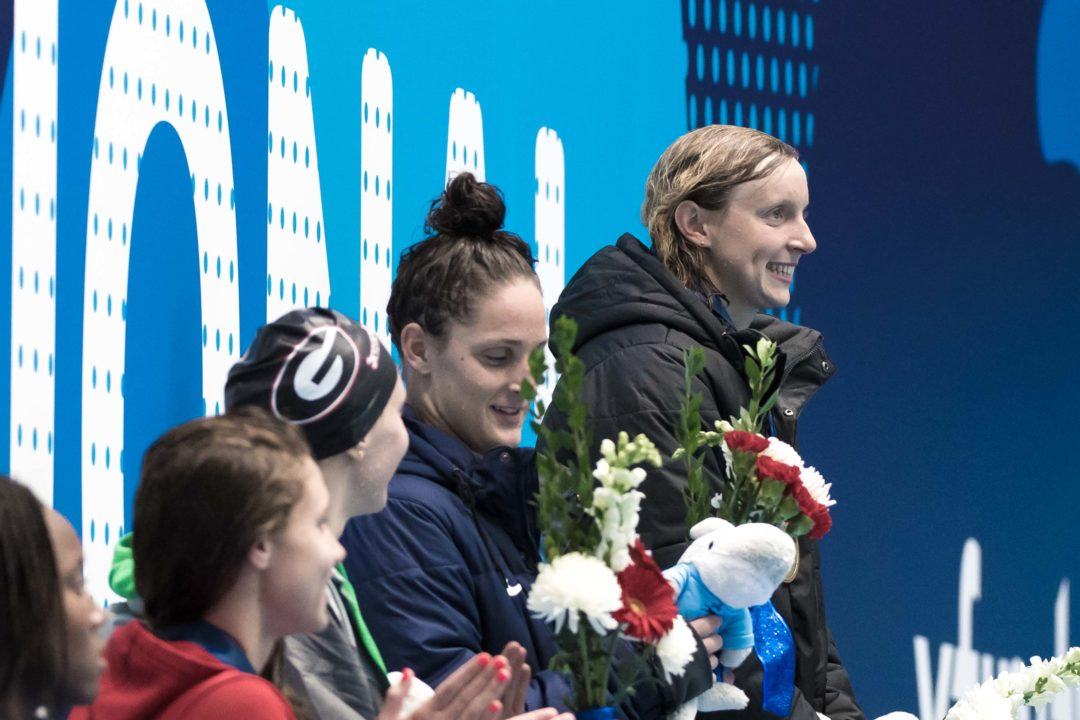 While the US is going to miss Allison Schmitt and Maya DiRado, Ledecky and Smith are as solid of a 1-2 punch as you’re going to see currently, and the “supporting cast” is strong as well.  Margalis swam in prelims on this relay in Rio (as did tonight’s 6th place finisher, Cierra Runge), and Comerford has been showing steady improvement all year.  Throw in Simone Manuel, and the US relay has both top-end talent and depth and looks to be the favorites heading into next month.

So, it looks to come down to Great Britain and the US.  James Guy and Duncan Scott give the Brits a 1-2 punch on paper like the US women, but then there’s over a one second gap between those two and the next fastest.  The US, meanwhile, has Blake Pieroni and Zane Grothe at 1:46-low, but also has two other men — Conor Dwyer and Jack Conger — who have been 1:45s before.  Conger was way off this morning and didn’t make the relay at all, but it’s conceivable that he could time trial before Worlds and end up being put on the relay somehow if the coaches deem it necessary.  Dwyer, meanwhile, hasn’t competed much, and we’ll see what more he can do in a couple more weeks, but it certainly wouldn’t be shocking to see him go under 1:46 on a rolling start.

Even without those two, though, the US top four times come in about eight-tenths of a second faster than Great Britain’s combined times.  While Dwyer placed 4th in the final in 1:47.25, that time was actually slower than Clark Smith‘s prelim time, so we’ve included Smith in our calculations instead of Dwyer.  And we haven’t even mentioned Caeleb Dressel yet, who swam a pair of 1:47s to qualify for the relay, today while also swimming the 50 fly.

The bottom line is that while Great Britain is dangerous (remember Kazan?), already the US men look to be the favorites on paper, and still have some good room for improvement between now and next month.

The best case scenario for Manuel. Her 800 most likely golden relay won’t interfere with individual 100 race. Should she was the fourth today she would have double. Now Mallory Comerford is in trouble. Her 52.81 made her a medal contender and because she was too fast today she got this relay final at WC to deal with. Despite Mallory Comerford has beaten Simone Manuel three times already (NCAA 200 y, 100m and 200m at NC) it will be Simone Manuel who will laugh last. I personally prefer to see Mallory on this relay and hope she will manage in the best way both 100 and 4×200 races. Actually it is possible that Ledecky, Smith, Marsalis and Runge will be… Read more »

Typically being fourth at trials doesn’t mean you’re automatically on the finals relay. The tendency is swimmers 1 & 2 make it straight to finals, and the best of 3-6 in prelims make it to finals. Also, it’s 100% coaches discretion, barring rules that force relay-only swimmers to swim, coaches can add anyone on the team to the relays (like with Phelps and Dirado at the past olympics)

U never know who will deliver the best split ( apart from the 2 best ) and be added and still be as strong as McLaughlin and Dirado .

I think many would say the relay is a bigger priority than am individual event. It is to me, being an American where winning relays is usual possible, desired, & expected.

Great analysis !!! love it . Now , its up to the Coaching staff to feel the best way forward for Mallory and the best line-ups . Usa has so much range in those relays that they have room for adjustments – and still win them ! i wouldn’t worry too much if i was her . She is on her first big meet and that puts a smile on her face and mine . GO Team Usa

The Us depth is just phenomenal – without MP , Lochte , DiRado , Schmitty and Franklin !!!

“Even without those two, though, the US top four times come in almost two seconds faster than Great Britain’s combined times.”

Your math is off…. difference is .83 seconds. This looks like it will be a close race.

Indeed, mental math late at night can get fuzzy. Thanks.

On paper yes , but some of the guys might still drop some time on both teams ….. those relays will offer incredible battles which we all love to watch .