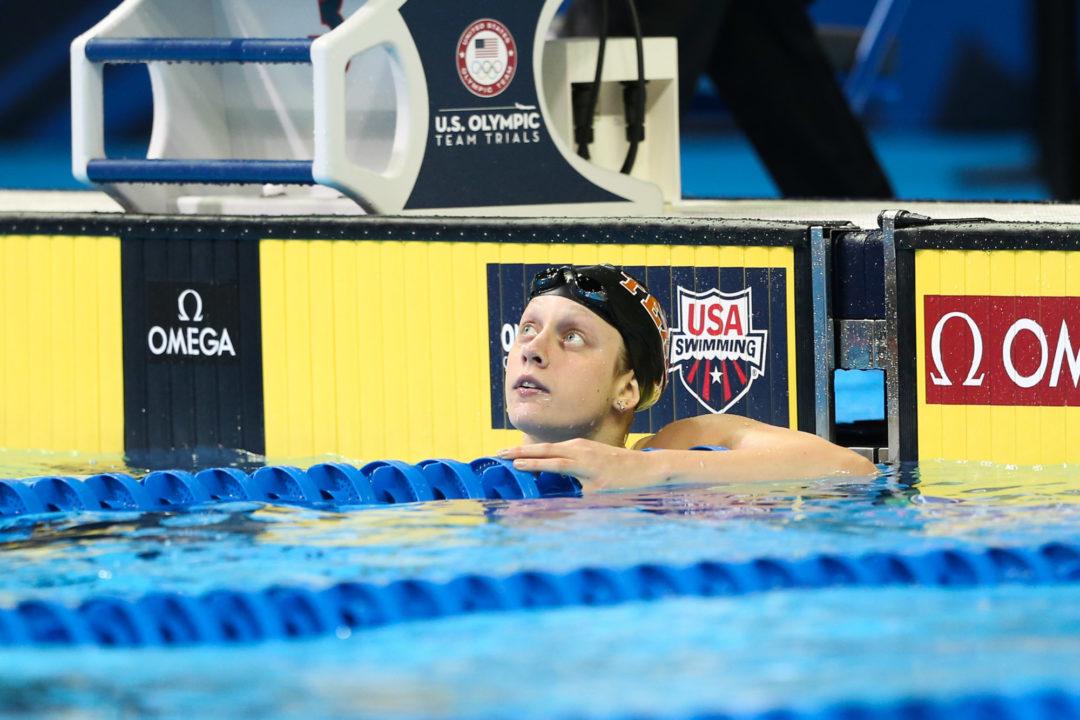 The women of the University of Texas have had incredible success this year which should carry through to an easy Big 12 title. Current photo via Tim Binning/TheSwimPictures.com

Townley Haas, last year’s NCAA champion in the 500 and 200 free, will be tackling some tough teammates in the 100 free today, the final day of the 2017 Big 12 championships.

One of the big races to watch is the men’s 100 fly, where Texas All-Americans Joseph Schooling and Jack Conger will go head-to-head.

Madisyn Cox knocked out Kathleen Hersey’s supersuit-era record in the 400 IM tonight at the Big 12 Championships.

In wholly-unprecedented-in-recent-years fashion, the women of the University of Texas have bulldozed their way into the top of the conversation around this year’s women’s NCAA Championships. The team is fresh off a colossal upset over defending national champions Georgia in January, when they snapped the Bulldogs’ 22-year home dual meet win streak. Under the intrepid leadership of coach Carol Capitani, the Longhorns even spent some time at the top of the CSCAA national poll. Though they have since fallen, to 2nd in the CSCAA poll and 4th in our own January NCAA Power Rankings, their performance this season is particularly impressive given their 15th place finish at NCAA Championships last season.

But, before the Longhorns can take on NCAAs, they’ll play host to the 2017 Big 12 Women’s Conference Championships. While the NCAA conference shuffle has left the Big 12 as the weakest of the Power 5 in NCAA Division I swimming, Texas is the only true national contender in the bunch. The team title may not be dramatic this season, but the battles down the scoresheet leave interesting opportunities in the fight for second and third.

Kansas and Iowa State have spent the last couple of years battling over Big 12 second place, with Iowa State taking the second-place edge in 2015 and Kansas winning second in 2016. Though both lost major players to the graduation stage last year (including Kansas’s heavy-hitter Chelsie Miller), Kansas should have a leg up over Iowa State, especially after their recent 180-116 dual victory over the Cyclones this month. The big names for Kansas will be backstroker Yulduz Kucharova and distance swimmer Libby Walker, while Iowa State’s Casey Roberts will look to return to the Big 12 podium in the 200 IM, where she finished third last year.

However, this may be the year that West Virginia puts up a strong fight against the Midwestern Jayhawk/Cyclone rivalry. Emma Skelley of has already hit a pair of NCAA B cuts in the 500 and 1650 free, as has her backstroking teammate Amelie Currat in both the 100 and 200 distances. Morgan Bullock is faster in the 100 fly and 200 fly than any other non-Texas swimmer this season (54.01/2:00.69). Emma Harris, meanwhile, looks stronger than any other non-Texas swimmer in the 200 breast with her 2:14.97 .

Texas – Claire Adams (freshman backstroker), Madisyn Cox (senior IMer/breaststroker/freestyler), Rebecca Millard (junior sprint freestyler), Joanna Evans (sophomore distance freestyler), Tasija Karosas (senior backstroker/freestyler/IMer), Remedy Rule (sophomore butterflier) – Winning the meet isn’t a concern for Texas as much as tuning up before NCAAs. It seems like Cox has been on the edge of a world-class breakthrough for a couple of years, and this could be it. In a similar way, riding on the wave of the Georgia dual defeat, this post-season could be Texas’s breakout into a true NCAA power.

West Virginia – Morgan Bullock (freshman flier/IMer), Amelie Currat (junior backstroker/freestyler), Emma Skelley (senior distance freestyler),  – Though the Mountaineers’ relays don’t quite add up to Kansas or Iowa State’s, Skelley and company have a chance to score major individual points that may make them a contender.

100 Back – Tasija Karosas has been the face of Big 12 backstroke throughout her college career, and her latest surge to 50.86 shows that she is not coasting into her senior season. But, though she may be the only Big 12 swimmer in history under 51, she shouldn’t rest easy. Former junior world record holder Claire Adams and her fellow freshman Kaitlin Harty are heading into their first college tapers, and both have incredible backstroke potential. Adams goes into the NCAA post-season with a quick 51.88 season-best and something to prove, after an early-summer hand injury derailed her long course Olympic Trials performance. And, though Harty has only been 54 this season, she saw incredible improvement around taper time last season, rocketing to 51.67. At the same time, WVU’s Amelie Currat and KU’s Yulduz Kuchkarova have each hovered around the 54 mark this season; the two will battle each other and fight to make themselves seen among the Texas backstroke excitement.

200 IM – This race is less of a showdown and more of a chance to watch a potential national champion practice her craft. Madisyn Cox comes into the 200 IM looking better than she ever has, fresh off the 10th-fastest performance in history, ranked #1 in the NCAA, and hungry after finishing fourth at this summer’s Olympic Trials. With 1:52.83, Cox is nearly five seconds ahead of anyone else who could potentially be in the field, and her Big 12 performance should give us a perfect preview of what’s to come at NCAAs.

200 Medley Relay – After Texas, the race for second place in this relay could be anybody’s game. Last year, Kansas had the edge with second place, and they are returning all four relay swimmers, Yulduz Kuchkarova, Bryce Hinde, Pia Pavlic, and Haley Bishop. However, Iowa State’s Harper Emswiler, Kasey Roberts, Kenzie Goudreau, and Laura Miksch have put up the fastest time this season of the non-Texas Big 12 teams with their 1:42.58 from the Iowa dual. And, West Virginia and TCU are both within just a second-and-a-half of Iowa State’s season-best going into the conference championship.

Texas is in a league of their own here, and they shouldn’t have to do much to win their 6th-straight title. It will be interesting to see how far they taper and how much they save for NCAAs, especially in their 200 medley relay, which has not hit the NCAA ‘A’ time yet.

Though Kansas and Iowa State look near-even on the relays, Kansas has more individual potential, and West Virginia has some new individual point-scorers that they couldn’t count on last year. However, it may be another year before West Virginia grows into a true competitor for the other two teams.