Texas Women Vault to CSCAA #1 After Upset of Georgia 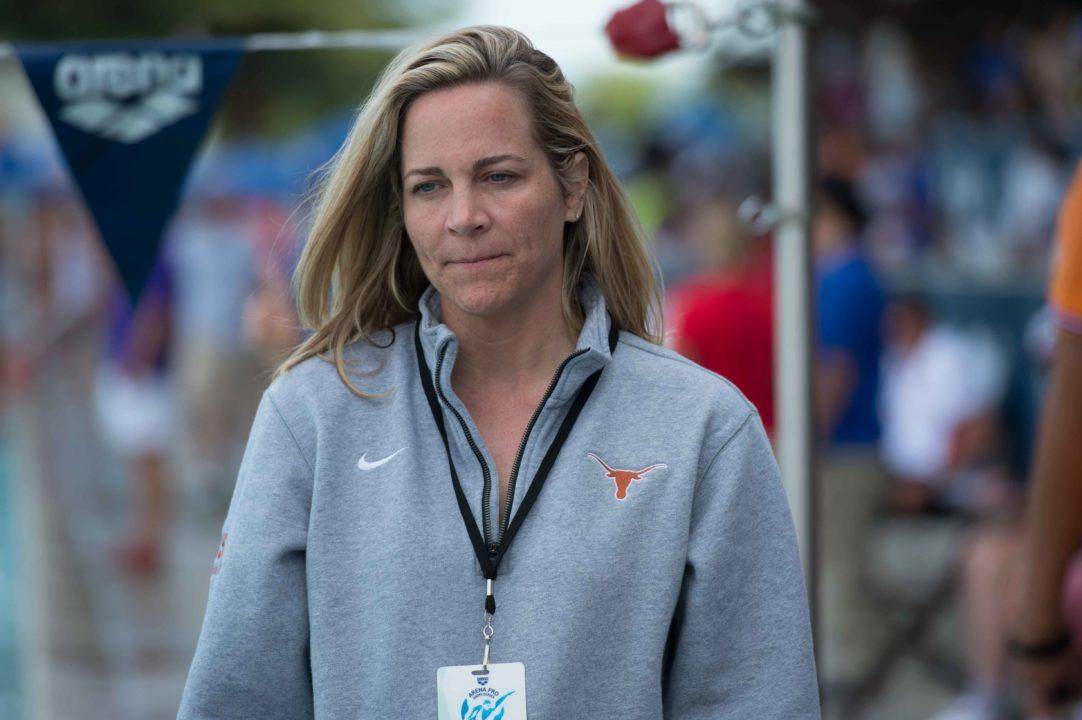 They supplanted former #1 Stanford from the last poll, done at the conclusion of the mid-season invites.

With not every team having raced since early December, there wasn’t a ton of movement in either the men’s or women’s polls, including the men’s top 4 remaining unchanged. After this weekend, there should b e more movement.

New Teams in the Polls:

January 18, 2017 – Following a dominating 171-124 win over then-number two Georgia, the University of Texas women’s swimming and diving team has been voted number one in the latest CSCAA TYR Top 25 Swimming and Diving Poll.   It is the first number-one ranking for the Longhorns in Head Coach Carol Capitani’s tenure and drops Stanford University to second and Georgia to third.  Virginia rounded out the top four.

On the men’s side, the University of California remained the top-ranked team ahead of the defending NCAA champion Longhorns.  NC State remained third while USC moved ahead of Indiana into fourth.

“This is a very special team, and I couldn’t be more proud of this group of young women,” Capitani said after Saturday’s win.  “I spent a long time at Georgia, and it has shaped the way I think and coach. I am very grateful for the people who have been a part of this journey. This team has some big goals, and this win is another step toward where we want to be.”

The loss snapped the Lady Bulldogs’ winning streak at Gabrielsen Natatorium at 103 straight, an NCAA record which began in 1995.

The next poll will be released February 1st.

Congrats to the UNC Men on fantastic placement of 4th! That’s what the 4 next to their school means right?

No it means they got 4 votes for 1st place. That’s why I’m confused why they’re not in the top-25?

It means they got 4 votes total. Not for first place.

Majoring in Fisheries, Wildlife, Conservation or Exploratory Studies will do that to you

With their blazing meet this past weekend, I don’t expect them to be needing a degree in the future. These are the kind of MEN that will be getting offers from elite sponsors for professional swimming straight out of college

Why does every article about college swimming, devolve into the same usual suspects bashing UNC for no reason whatsoever? Does it make you feel better to denigrate college kids?

Isn’t this a trend with the Texas women? Swim lights out during the season and always kind of fizzle out at Nats?
No disrespect at all, I just remember them beating some big names last year as well then slipping at Nats.

That was last year – will not happen this year. Texas has now so much talent. Last years’ underclassmen are swimming much better, freshmen are great, and Cox is winning a tittle or two this year.

Happy to see ex Longhorn Brian Schrader is doing great job at Denver. I have been following his work. His breaststroke coaching is very good. Possible head coach after Eddie Reese retired? Denver will be high on our twins’ college list next year. Hope they will be good enough to be considered there,

Doubtful psychodad, cox will most likely not win considering she is only 1:52.8 in the 200 IM and her breaststrokes aren’t nearly as competitive. Now that I think of it the Texas women have swum lights out at dual meets the last two years and have Come up short at the end of the season. I’d say 4-6th for them would be great for them considering they have no superstars on their team. Carol seems to be a hit or miss coach when it comes to taper. 15th last year?! Come on they were way better than that

I can’t tell if x swimmer’s comment is sarcastic. Cox swims a 59/2:07 in breastrrokes, well ahead of Eastin in breastroke…..and the 1:52 is a mid season taper so she has it in her. Eastin and Cox were neck and neck in SCM meet recently in same race.

11
-1
Reply
The Grand Inquisitor
Reply to  Know It All

Not sarcastic – clearly stating the obvious, that Cox won’t be competitive to win either breaststroke event at NCs, so it comes down to the IM events. Eastin beat her in 200IM at sc worlds by close to a full second – hardly “neck and neck.”

I don’t see her winning any titles but she could have three top-3 finishes, easy. UT women doing great mainly with all stars having terrific seasons, don’t have depth to challenge top two but they are certainly on the rise…

Pretty bold predictions, particularly regarding Cox. Which event (or two) is she winning, exactly? No doubting her talent, but as I recall, she had a pretty good run in dual meets going into last year’s NC and only managed to make one “A” final (in 200IM, where all 3 swimmers ahead of her are returning, including the AR holder). Perhaps she might be better served carrying the burden of slightly less lofty expectations.

USC moved ahead of Indiana into 4th?

How does Denver move up and frankly even make this list at all?

Obviously you have not seen any of Denver’s meet results.

Is there some award or prestige for finishing on top of these rankings at the end of the regular season?

Where is Princeton? I heard they a had a promising young team.

Rankings at the top will be much different than that at NCAAs on the women’s side. Texas first ahead of Stanford. Cal 6th. Funny.

Agreed, Cal, Georgia and Standford won’t even have to think about Texas come march, they’ll be irrelevant considering the lady longhorns wont have much to improve on