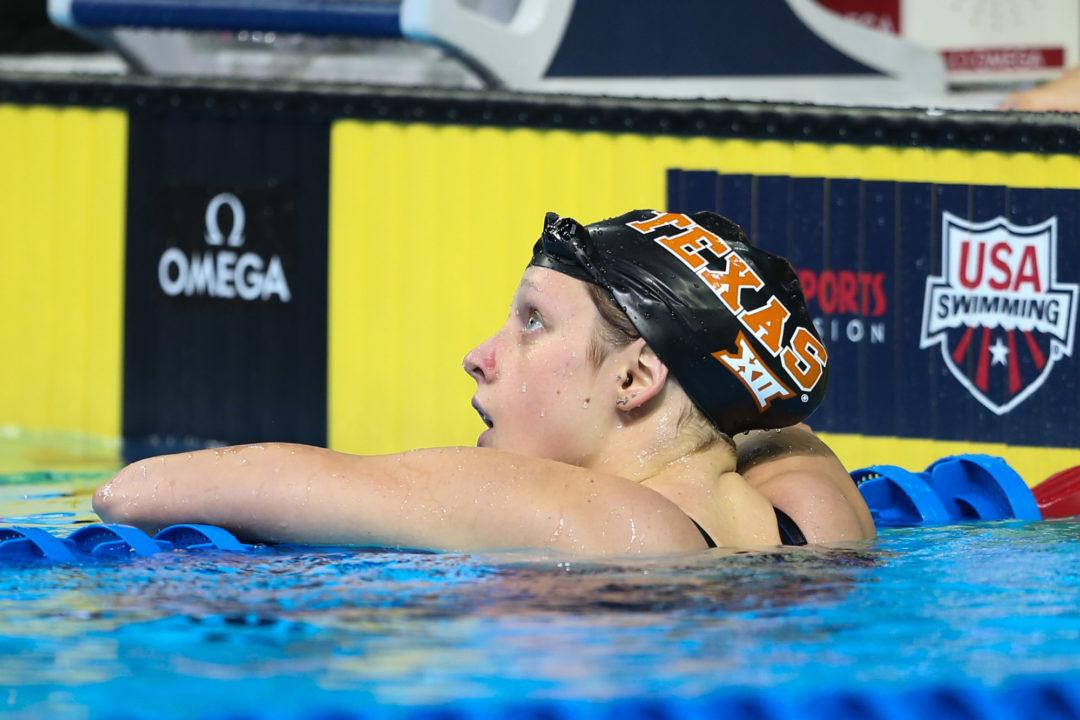 The Texas Longhorns accomplished a feat that hasn't been done in over 2 decades when they defeated the Georgia women on Saturday afternoon. Archive photo via Tim Binning/TheSwimPictures.com

The Texas Longhorns accomplished a feat that hasn’t been done in over 2 decades when they defeated the Georgia women on Saturday afternoon. That was Georgia’s first home dual meet loss in 22 years and snapped their winning streak after the Bulldogs had won 103 straight home meets.

Texas senior Madisyn Cox has been outstanding so far this season, and Saturday’s dual meet was no exception. Cox went 3-for-3 yet again in her individual events. She not only won her races, but she dominated them. Her closest race was in the 200 free, where she posted a 1:45.28 to win by nearly 2 seconds over Georgia’s Meaghan Raab (1:47.03). In her next 2 races, she was in a league of her own. Cox won the 200 breast in 2:09.56, finishing 5 seconds ahead of anyone else. She finished off her schedule in the 200 IM, where her winning time of 1:57.26 was over 4 seconds ahead of the field.

The Longhorns had a few swimmers sweep their specialties to help them to victory. Bahamian Olympian Joanna Evans fended off the Georgia distance freestylers, winning the 1000 free in 9:46.40 and the 500 free in 4:45.85 ahead of UGA’s Stephanie Peters. The Longhorns’ Remedy Rule swept the butterflies, turning in winning times of 53.12 in the 100 fly and 1:56.03 in the 200 fly.

Georgia’s Olivia Smoliga put up one of the Bulldogs’ highlights of the meet. She took on Texas’ Tasija Karosas and Claire Adams in a close 100 back battle. Smoliga had the fastest back half, coming back with a 26.60 to win in 52.84 ahead of Adams’ 52.98 and Karosas’ 53.08.

Stay tuned for our recap of the men’s meet.

The win is the first for fifth-year Texas head coach Carol Capitani over Georgia and her mentor, UGA head coach Jack Bauerle, for whom she served 14 years as an assistant coach over two stints.  Capitani left Georgia in 2012 to take over the Longhorns’ women’s swimming and diving program.

“What a big day for Texas,” Capitani said.  “This is a very special team, and I couldn’t be more proud of this group of young women. Our girls have fought all year, and today was no exception. It is an emotional day for them and for me. I spent a long time at Georgia, and it has shaped the way I think and coach. I am very grateful for the people who have been a part of this journey. This team has some big goals, and this win is another step toward where we want to be.”

Texas sophomore Joanna Evans, a Rio Olympian for The Bahamas, held off Georgia’s tough distance contingent and claimed the 1,000 freestyle in 9:46.40.  Cox went three-for-three against and won all six individual races on the road trip.  She captured the 200 freestyle in 1:45.28.

Georgia answered with its first win of the day in the 100 backstroke before UT sophomore Olivia Anderson teamed with senior Jordan Surhoff to lead a one-two Longhorns finish in the 100 breaststroke.  Anderson took the win in 1:01.85 while Surhoff followed in 1:01.98.

Rule, one of the nation’s standout butterflyers halfway through the dual-meet season, remained true to form in the 200 butterfly, where she was victorious in 1:56.03.  Millard followed with another Longhorns win in the 50 freestyle at 22.53 and returned after a diving break to win at 100 yards in 48.83.

Freshman Alison Gibson swept the diving events and gave the UT women a diving sweep for the week over Auburn and Georgia.  The Austin native claimed the one-meter event with 320.55 points and led a one-two-three Texas finish alongside sophomores Meghan O’Brien and Sofia Rauzi.  Gibson edged O’Brien for top honors on three-meter with 359.45 points.

Rule finished off a sweep of the butterfly events and ran down UGA’s Chelsea Britt in the 100 butterfly at 53.12.  With the team victory in hand, Texas elected to decline any remaining points due to them and completed the final two events as exhibitions. Nevertheless, it was Texas who came out on top to close out the meet.  Cox nailed down her third victory of the day and powered away from the rest of the 200 IM field in 1:57.26, over four seconds clear of her nearest competitor.

Millard, Adams, Rule and Karosas put the finishing touches on the Longhorns’ victory with a win in the 400 freestyle relay at 3:17.61.

Texas returns to action on Jan. 27 when it hosts Arizona for a two-day dual meet at UT’s Lee and Joe Jamail Texas Swimming Center.

ATHENS, Ga. — The Georgia swimming and diving teams were swept by Texas on Saturday at Gabrielsen Natatorium.

The loss snapped the Lady Bulldogs’ winning streak at Gabrielsen Natatorium at 103 straight, dating back to 1995. Georgia is now 104-2 all-time at home.

“Texas deserves all the credit in the world,” Georgia head coach Jack Bauerle said. “They were better than us today. I am proud of our kids for the way they competed. We are sad to see the streak end, but we are proud of what we accomplished. The sun will come up tomorrow, and we will continue to work hard.”

Olivia Smoliga had the Lady Bulldogs’ lone victory of the day as she claimed the 100-yard backstroke with a time of 52.84.

Geogia’s squads will return to action next Saturday at noon at Tennessee. Georgia will cap its regular-season schedule and have Senior Day Jan. 28 at home against Emory.

I can tell you for a FACT that Texas was NOT rested!!! Look at the times. They simply were better this time out.

I’m completely neutral in this match up, no real reason to route for or against either of these teams. The Texas women did not really seem rested to me, that’s how fast they’ve been swimming all season and they definitely haven’t rested for every dual

Wow reminds me of Brock beating the Undertakers streak, up and comer beating the big daddy

The rest for Texas was ridiculous had 4 days from when they left until this meet UGA had no chance from beginning. Sad to see meet not closer

Rested is all I can say

Idk. They beat Cal too. They’re looking solid this year

Love when people speculate. They weren’t going for Big 12 records and the best swimmers weren’t tapered. Had a bad NCAA…it happens.

Not on the mens side

You would be wrong!

Wow, did Texas look good!!! They won just about every event on both men’s & women’s side!! They ended up exhibitioning last few events.