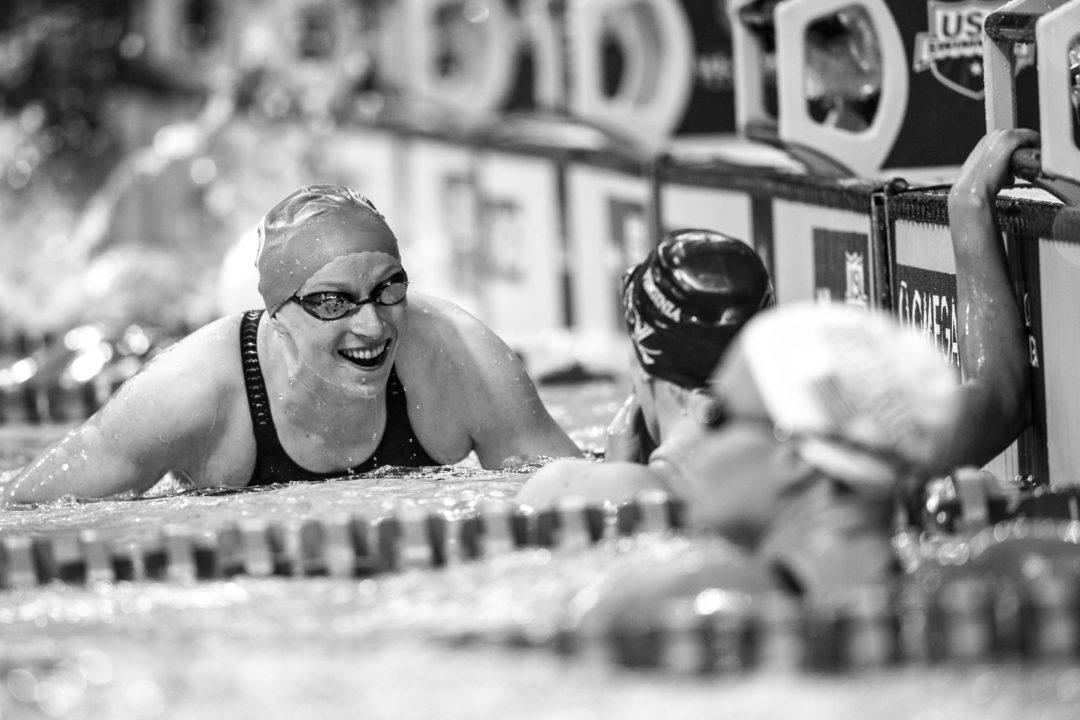 Katie Ledecky will attempt to handle Sarah Sjostrom in the 200 free in Rio in a blockbuster showdown between two forces in the sport of swimming. Current photo via Mike Lewis/Ola Vista Photography

Sarah Sjostrom and Katie Ledecky are so good at their best events that there haven’t been any consistent challengers (or real challengers, at all) over the last few years. Former 100 fly world record holder Dana Vollmer went off the map after London, and Sjostrom has been the unquestioned sprint butterfly queen since her World Championship title in 2013. Even since Vollmer’s return and her quick catch-up back to form, Sjostrom holds the five fastest 100 butterfly performances ever and has been swimming mind-bogglingly fast in the months leading up to Rio. Ledecky, meanwhile, doesn’t need much of an explanation for her astounding success in the 400, 800, and 1500m freestyle races since 2012. These two leviathans of their disciplines will battle in an off event* in what could be the race to watch in Rio.

Ledecky did her thing where she blows up for some huge time at the Austin Pro Swim Series meet, and she was 1:54.43 there for a lifetime best. That time was actually faster than what she ended up going in the 200 free final at the Olympic Trials, which suggests (along with her so-so [by Ledeckian standards] 800 free and 100 free) that she probably didn’t rest much, if at all, for Trials. Meanwhile, Sjostrom swam a 1:54.34 at Swedish Nationals earlier this month, nearly eclipsing her own personal best.

The world record is a 1:52.98 done during the suit era by Italy’s Federica Pellegrini (we’ll talk about her in a bit), and the fastest-ever in textile was American Allison Schmitt‘s 1:53.61 from the London Games, which also stands at the Olympic meet record. Both Ledecky and Sjostrom could certainly be under Schmitt’s mark, and Pellegrini’s could be in danger. Sjostrom is more of a sprinter, so we know she has the front half speed necessary, and Ledecky has been sub-54 more than once in the 100 free. The Swede has backed off of the 200 free before, dropping it from her schedule at last summer’s World Championships, only to swim faster than Ledecky’s world title-winning 200 free time while leading off Sweden’s 800 free relay. At the Olympics, however, the 200 conflicts with neither swimmers’ regular schedule, so we might just be lucky enough to see the butterfly queen and distance superstar compete in common ground.

Pellegrini, who is still alive and kicking, actually just took down her own national record in the 100 free at the 2016 Sette Colli Trophy in Rome with an impressive 53.18. She also swam a 1:54.55 200 free at the same meet, erasing Sjostrom’s Sette Colli record, in turn beating her 200 free times from the previous three World Championships as well as the London Olympics. Pellegrini’s alarmingly fast swims are even more impressive considering her two performances from the Sette Colli Trophy are textile bests for her. She has more international experience than Ledecky and Sjostrom combined in this event, and could absolutely surprise for the gold in Rio.

Australia’s Emma McKeon continues to improve in the 100 and 200 free, impressing with a 1:54.83 to win the Aussie Trials and also posting a sub-53 performance in the 100 at the same meet. McKeon is the fourth and final swimmer to break 1:55 this year, and she will give the other ladies a run for their money.

Let’s talk a bit about Sjostrom and Ledecky’s countrymates in this event: Michelle Coleman and Missy Franklin. Coleman posted a lifetime best 1:55.88 at the Sette Colli, where she raced Pellegrini. The Swede is an incredibly useful 2nd big leg for her nation’s 800 relay, and has posted several times under 1:57 in the last year or so that suggest she should be competitive in this race. Franklin, who has had not only a rough Trials but a rough couple long course seasons, did really pull through despite low expectations in the 200 free final in Omaha to earn an individual bid to the Games and beat out Allison Schmitt. Franklin’s 1:56.18 is by no means a good time for her at a meet like Olympic Trials. The 2011 World Champ, however, has been under 1:55 before, and her bronze in Kazan, plus her swim at Trials, show that she can come through when she needs to. With no more 100’s to swim, and only the 200 back to worry about individually, Franklin should be capable of another 1:55 mid to low at least in Rio.

China’s Shen Duo posted a 1:55 at the Chinese Nationals in April. The Chinese 800 free relay is one for the Americans to keep the closest eye on, and Shen is certainly in the mix for appearances in the final. Femke Heemskerk is a much more viable threat in the 100, but she did post a 1:54.68 in March of 2015. She hasn’t been consistent enough or strong enough when it counts in this race, however, to warrant the expectation for her to repeat a time like that.

Dark Horse: France’s Charlotte Bonnet. She posted a 1:56.32 at the French Open in early April. That wasn’t her first time toying with the 1:56 barrier, after posting a 1:56.16 at the Canet stop of the 2015 Mare Nostrum tour. She’s coming off of a bronze from the 2016 European Champs behind Pellegrini and Heemskerk, posting a 1:56.51 there.

I will be backing Sjostrom, but I think Ledecky will just squeak it. McKeon though could be a spoiler, her 2:07 200m fly shows she has the endurance.

I still think Missy can medal

You sir, are a brave soul

Sure she can … But unless she shows something she didn’t show at Trials, it’s not likely.

Not the craziest thing I’d ever heard.

She could medal or miss the final, wouldn’t be super shocked either way.

while I don’t think she’ll do either, if I had to pick one I’d sadly say more likely to miss the final than medal.

Missy is out of form

I like to hope that Missy miscalculated her rest for the Trials and will do better in Rio.

Franklin’s personal best is 1:54.8 from Barcelna (2013). Even if she manages to get to her best form ever it still won’t be enough for podium. What I really want to see from her is at least the Kazan form. That is 1:55low, to make world record at 4×200 possible and to get rid of one more shiny suits record.

I could go either way on Ledecky v. Sjostrom. I’d like to see the Swede take it but Ledecky is a beast. Very, very hard not to pick her.

It’d be a shocker if Missy medals. In fact, I think there’s a higher probability that she misses the final.

Think Ledecky over Sjostrom because of the number of 200’s that has to be done, 3 or 5 depending on if the 800 FR is before or after the individual 200 free.

What are you talking about?
World champion gold medallist is predicted to win it

4 people have already swum faster than 1:55.16 in recent months.
So what makes it interesting that they will do it again in Rio?
It doesn’t sound interesting to me.

People are not always as fast on the big stage with real competition.

Seriously, Allison not even in your top 8?

She’s not swimming? She got third at trials…

Your time are insane. Not one but two mid-53? In the history there are only three time under the 53 mark (2 Pellegrini super swimsuit and Schmitt)
The winner will swim a 54 low maybe, in best case, a 53 high (something like 1.53.9) nothing less…

I think the World record holder goes a 1:54 low or just under it, AT BEST.