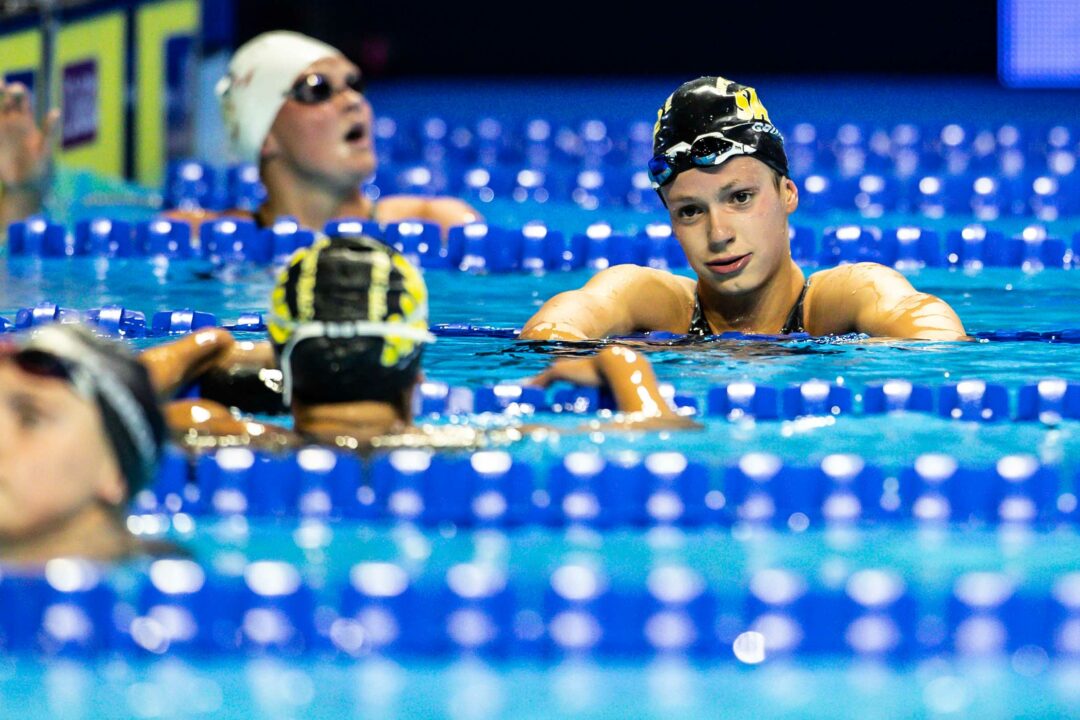 15-year-old Katie Grimes of the Sandpipers of Nevada dropped 11 seconds to surge to an Olympic berth with the #3 swim in 15-16 history - behind two legends. Archive photo via Jack Spitser/Spitser Photography

Back in 2012, a 15-year-old Katie Ledecky dropped six seconds in her 800 free to stun the U.S. Olympic Trials field and make her first Olympic team.

Nine years later, a veteran Ledecky won the 800 free, then turned around to watch another 15-year-old stun the field for an Olympic berth. 15-year-old Katie Grimes of the Sandpipers of Nevada dropped 11 seconds to surge to second place behind Ledecky, earning her first-ever Olympic berth.

Grimes went 8:31.73 out of heats – that was a six-second drop that snuck her into the final in 8th place. Then in the final, the young distance star found another gear, smashing an 8:20.36 to outswim open water Olympian Haley Anderson for the second Olympic spot behind Ledecky.

The time for Grimes moves her to #3 all-time in USA Swimming’s 15-16 ranks. She sits behind two absolute legends: Ledecky herself and former world record-holder Janet Evans.

Grimes’ swim caps a stellar week for the Sandpipers of Nevada. 16-year-old Bella Sims made the Olympic team as a member of the 4×200 free relay for the Sandpipers. And she swam to 5th in the 800 free final tonight, moving to #5 all-time in the 15-16 age group’s history.

When Ledecky made her Olympic team at age 15, she was 8:19.78 at Trials – just half a second faster than Grimes was. Ledecky kicked off her brilliant international career later that summer, dropping to 8:14.63 to win Olympic gold.

The Olympics in the 80s and 90s had alot of Jennifers.

The moral of the story there is: name your kid Katie if you want her to have a good chance to be a distance swimming star.

The commentary booth went on vacation during this race. Not focused or really paying attention to the race to make the Olympic team. Mostly useless chatter as an epic race unfolded. Pretty inexcusable.

Congrats to Katie!
Why the first name of Katie is so magical in US women’s swimming? 🙂

We also have another Michael and Ryan in men’s swimming, this time it’s Michael Andrew and Ryan Murphy! They’ve replaced the namesakes Michael Phelps and Ryan Lochte!

Amazing.
The 3 girls of Sandpipers have made the team.
One in the 4X200 free relay.
Another one in the 1500 free
And the last one in the 800 free.
Hopefully their LCM progression will not be stopped in college.
I would prefer they turn pro and keep training in Nevada where it works perfectly for them.
I have the same concerns about Torri Huske or Regan Smith going to Stanford.
But I know college swimming is a religion in USA. And it’s criminal to even just bring facts that only show that college swimming is not working for evetyone.
Take just Cal and Stanford women’s swimming for example in the… Read more »

Absolutely agree! Even other countries not taking NCAA route nearly as much as in past. NCAA is a great experience but 50/50 at best for top highschool women improving after entering. Most of the top programs (UVA) are not as logistically appealing as those with fun in sun. I suspect more top teens will start paving a new path of exciting experiences which still include education but not necessarily through NCAA.

Regan and company don’t go to college just to swim. They go for the education. Athletic performance won’t be around forever. A great education will be.

Agree, but you can still get a great education and not participate in NCAA as a student athlete, but just as a student and maybe even a better education!?! Ledecky did for some of her career. No one is suggesting to leave a great education behind just pave another path which allows you to stay with home swim club that’s working very well. NCAA is a financial decision for many to get college paid for. Most other countries do not follow the NCAA model like Australia, Japan, Canada etc and are known for their strong/superior education system. If you are at top female swimmer and can make some money off sport to more than pay for education why not? Otherwise… Read more »

Interesting no one has mentioned her breathing pattern. Right side down, left back. Split the V when 6-7 dropped off and could have clear visual of the field the whole race with that great, balanced loping “true” distance stroke each 50.

She gave a clinic out there on how to race and perform when it mattered and just go for it.