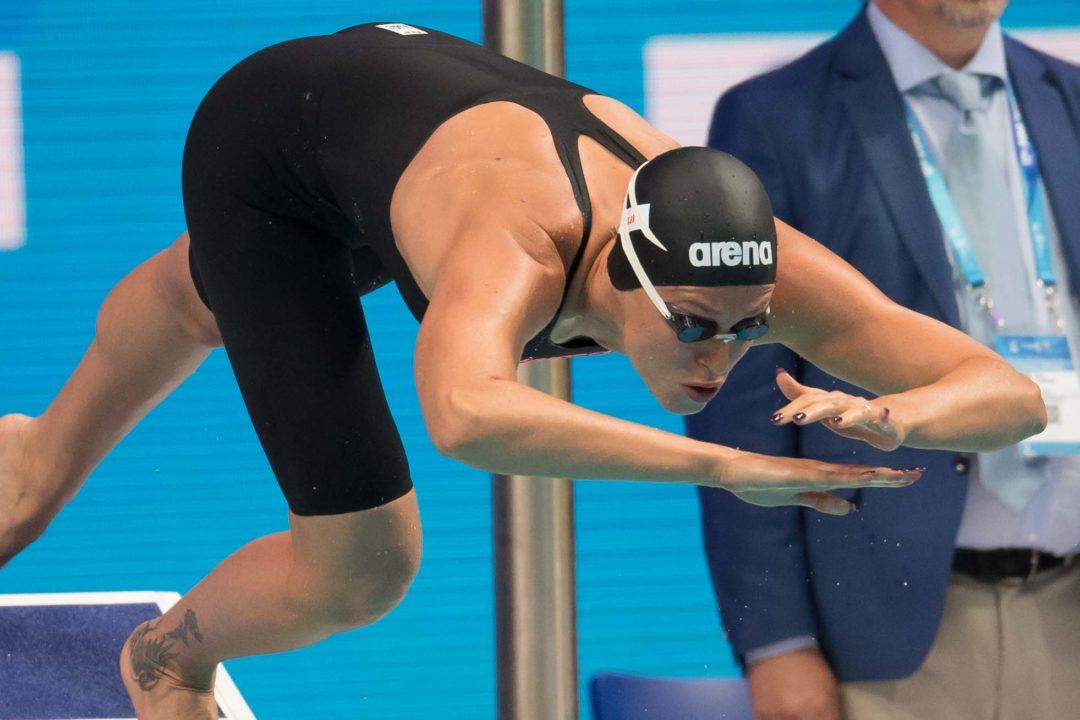 Federica has confirmed her decision after the World Championships to retire from the 200 free. Archive photo via Mike Lewis/Ola Vista Photography

The Italian Swimming Federation will send a massive roster of 36 swimmers, 21 men and 15 women, to the upcoming European Short Course Championships. The event will be held from December 13th-17th in Copenhagen, Denmark in the 6,500 seat Royal Arena.

33 of the 36 athletes were chosen on the basis of hitting domestic time standards as well as their results as the summer World Championships in Budapest. Those athletes will be entered only in races in which they’ve hit the requisite standards. The lone exception was Niccolo Bonacchi, who was selected after missing the time standard by just .01 seconds.

In addition, 3 athletes both between 1998-2001 (16-19 years old) have been selected as developmental choices with the hopes that international experience will speed-up their growth as athletes. Those three athletes are Fabio Lombini (1998), Ilaria Custinato (1999), and Thomas Ceccon (2001).

As big as the team are, there are still some very significant absences including veteran Filippo Magnini, who announced his retirement after last week’s Short Course National Championship meet.

Italian legend Federica Pellegrini has also affirmed her decision to event-retire from the 200 free – which she announced she would do after winning the World Championship this summer. While she did race the event twice at the Short Course World Cu since then (the two that came shortly after Worlds), she has largely stuck to that pledge – having raced just the 50 and 100 at Italy’s National Championship meet. Pellegrini has won 9 European Championships in the 200 free, including the last 2 in short course meters.

Included, then, on the roster are Marco Orsi, the defending 100 free champion, and Gregorio Paltrinieri, who set a World Record in the 1500 free at the last edition of these European Short Course Championships. Also returning are all 4 members of the relay that won the last European short course title (in a championship record) in the 200 medley relay: Simone Sabbioni, Fabio Scozzoli, Matteo Rivolta, and Orsi.

The defending women’s 200 free relay will return 3 of its 4 legs: Erika Ferraioli, Aglaia Pezzato, and Pellegrini, with Di Pietro being the exception. Lucrezia Raco, a 26-year old who placed 4th at this weekend’s Italian Championships in the 50, is the likely replacement on that relay.

She is probably counting on her 100 getting better if she exclusively focuses on it. She was a 100 freestyler way back as a teenager, before her first coach turned her into a mid-distance specialist. I don’t see her matching the likes of Manuel, Sjostrom and the other 52” girls, but entering an Olympic final is not entirely out of the question and it would be a great honor to her.

Sometimes I don’t think we appreciate just a good swimmer. The goal for a swimmer could be different than what we set up to be their goals. Italy’s got a team that can medal at 4×100 free at the Euros, a team she can anchor. That could be enough driving force. She has battled with expectations for an entire career, maybe she just wants to have fun now.

I know she said shes done with this event but…its really all she has left, so i don’t really get it. Shes competitive in other events among Italians, but internationally she drops off. Her 100 is like a 53 high…so shes useful on relays.

Well she got smoked by Kathleen Baker in a 200back SCM a few weeks ago so I think that ship has sailed.