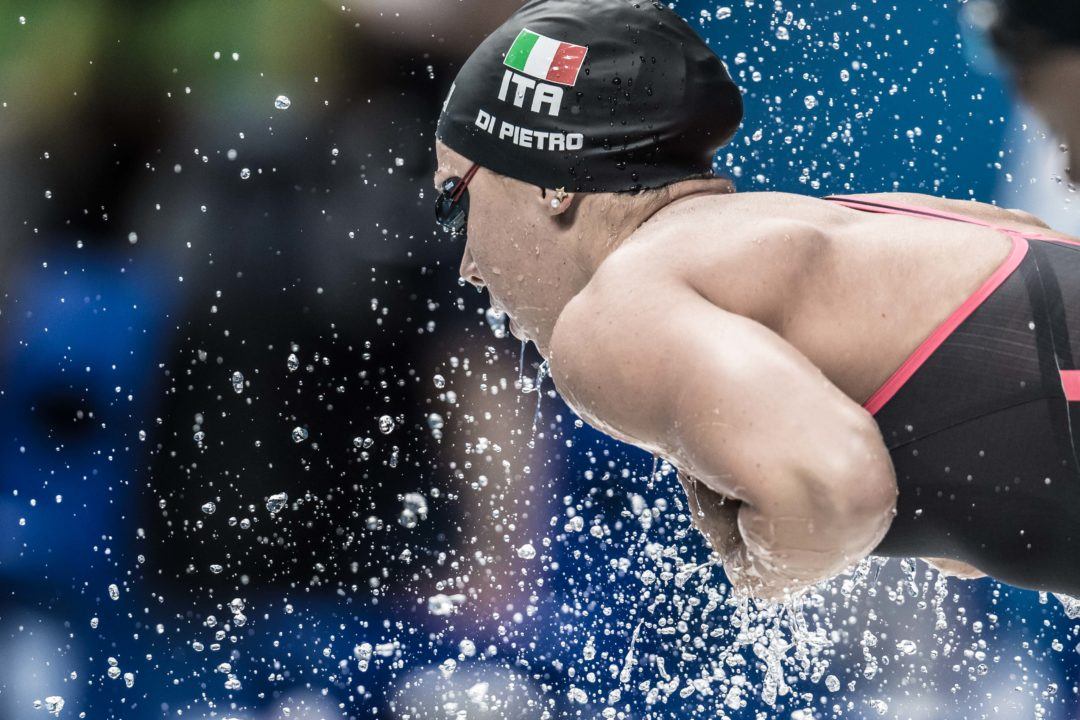 Di Pietro releases a statement to update her fans on her rehabilitation and when she might be back in the pool. Archive photo via Mike Lewis/Ola Vista Photography

Silvia Di Pietro is rehabbing from surgery on her patellar tendon from earlier this year, SwimSwam Italia’s Giusy Cisale reports.

Last year was a standout year for Di Pietro. She added a new Italian national record to her resume in the 4x100m freestyle relay in Rio 2016 and four Italian national records in the 2016 FINA World Swimming Championships (25m) in Canada. Individually, she raced for a silver-medal in the 50m free in Canada with a time of 23.90. She won two more silver-medals in the 4x100m freestyle relay and 4x50m medley relay swimming the butterfly leg. She earned a bronze medal swimming the first leg of the 4x50m freestyle relay.

2017 FINA World Championships in Budapest this past summer was another opportunity for Di Pietro to shine.

Unfortunately, she injured her patellar tendon in preparation for Budapest. She continued to train despite her injury, which only worsened the situation. Because of her injury, she had a disappointing performance in Budapest and even scratched one of her events, 100m butterfly. She failed to qualify for the semi-finals in the 50m and 100m freestyle and barely qualified for the semi-finals in the 50m butterfly, but missed the finals.

Silvia released a statement to her fans a couple days ago to address her rehabilitation efforts and give an update on her injury.

Rough translation: “Many of you have been asking how I am, since I don’t compete and when will I return to compete. During the preparations for the Budapest World Championships last summer I had injured my patellar tendon. Unaware of the severity of the situation, for months I continued to train and compete by tightening my teeth. Unfortunately, this has only worsened an already serious condition of tendon degeneration. By renouncing participation in the World Cup Series and turning on the tendon “reconstruction” therapy, I am now committed to rehabilitation and recovery of the tone. The work goes well and I have an attentive staff who follows me daily, but the course is rather long. Going forward we don’t know yet when I will return to train at full speed nor when I will return to compete, but we are confident that this will happen in the spring. Thank you for the support I am receiving from my club Aniene Circolo Canottieri and the Carabinieri Sports Center to which I belong. Thanks for all the messages of encouragement!”