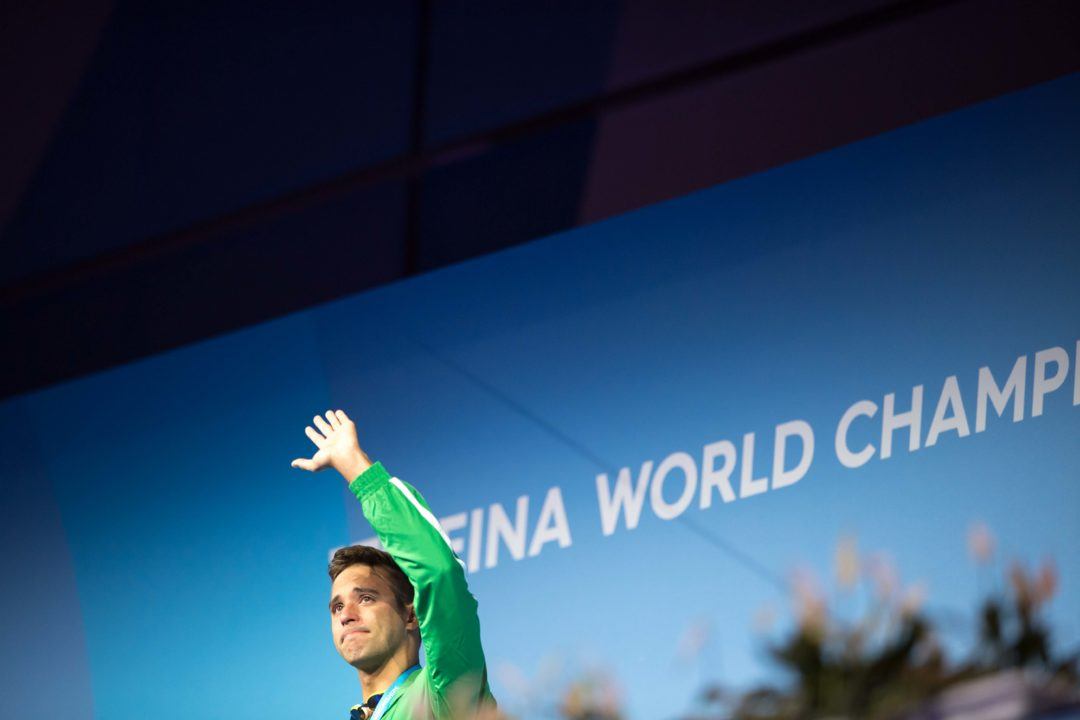 "It was my redemption after losing in Rio. I said I would make no excuses and I wanted to win the gold one year later" Archive photo via Mike Lewis/Ola Vista Photography

Everyone remembers Chad le Clos as the man who upset Michael Phelps in the 200m butterfly in London 2012, but who is behind the Champion? Chad’s emotions behind every race are so real that after his disappointing 4th place finish in the 200m fly in Rio, his fans were hoping for redemption in 2017.

Le Clos responded and had a year full of redemption.

At the 2017 FINA World Championships in Budapest, he won the 200m butterfly.

SwimSwam:  Let’s start from the present. You just won the Fina World Cup for the fourth time, what are your emotions about it?

SwimSwam:  At the beginning of 2017 you went back to work with Andrea Di Nino. What did you find in the Di Nino method?

Chad Le Clos : “Andrea is somebody I’ve looked up to as a coach for a very long time. Of course he had many greats – Evgenij Korotyshkin, Milorad Cavic, and Sergey Fesikov and many star champions that he managed over the years. He [Di Nino] has done a very great job with them. So, for me to work with Andrea was fantastic, a great privilege for myself, and we have a great human relationship and great chemistry, which is very important I think in swimming and in sports. So, I’m very happy with the “Boss” Di Nino.”

SwimSwam: For Andrea Di Nino, the team is very important. Do you think swimming is an individual sport or a team sport?

Chad Le Clos : “Of course it’s a team sport! All the work that we put in is something from myself, from the coaches, from the physios (physiologists), from the doctors, and all the people around me – my management team and my family support and it’s a team effort.”

SwimSwam:  One of the projects you hold the most is the CLC Academy. What are the reasons for this project?

SwimSwam:  You will be in the history of swimming for being the twenty-year-old who ripped gold from Michael Phelps at the London Olympics in 2012 in the 200m Butterfly. How did you feel beating your childhood idol?

Chad Le Clos : “You know, it was emotional and such a big moment for my family and my country. It was just unbelievable. I looked up to Michael for many years as a young kid and to have raced him in the final was such an honor for me. It was phenomenal!”

SwimSwam : You have us all moved when you embraced Laszlo Cseh in Budapest (World Championships 2017) and you saw him as the real winner. You are always a great person with your opponents. What are the most important values ​​for you?

Chad Le Clos : “For me it is always very important to be humble and to be a good person outside the water. God gave me a good talent and I worked hard at it, which is why I’m so successful. So, be kind to the people and be good to everybody around you. At the end of the day, one day, I will not be swimming and I hope to have friends outside the water.”

SwimSwam:  What kind of little swimmer were you?

Chad Le Clos : “I was always very happy swimming. I really loved the competitiveness of swimming and I loved to race everybody all the time – in training, even the warm-up, in the cool-down. I used to work very hard as a young kid. I was always full of energy for a young kid.”

SwimSwam: Swimming at high levels involves so many renunciations. What were the hardest to deal with?

Chad Le Clos : “As a teenager it was difficult to go to parties. I had to sacrifice a lot. I sacrificed my social life and my friends, but I gave that all away so I could focus on my training – especially around 18, 19, 20. A lot of things were sacrificed because of where I’m at, but I’m very grateful to make it to the top. A lot of the hard work was also sacrifices from my family.”

SwimSwam:  You are very attached to your family. We all remember your tears in dedicating your medal to your Rio 2016 to your mother. What role did your parents have in your sports growth?

Chad Le Clos : “My family was really very important. My mom, my dad, both my brothers, and my one sister are all a very close family and it was a team effort. For me, it’s very emotional because both my parents had cancer. A lot happens… sometimes you deal with disappointment and you just have to deal with that. Sometimes it’s more important, well it is always more important, for your family to be healthy than to win a gold medal. So for me that’s why I dedicated the win to my mom.”

SwimSwam: What is your favorite workout?

Chad Le Clos : “I think the biggest memory has to be of course from Budapest. It was a big moment for me. It was my redemption after losing in Rio. I said I would make no excuses and I wanted to win the gold one year later. I said I would win it and I’m very proud of my achievements, but also it was just a very special moment because of the way it happened. Laszlo (Cseh) is a good friend of mine and being in Hungary with a big big crowd for the Hungarian it was a difficult away game.”

SwimSwam:  Your past rival was Michael Phelps, and today who is your rival, Chad?

Chad Le Clos : “There are rivalries all the time. You need to focus on yourself and be the best you can be – whether it’s  Michael Phelps  or Laszlo Cseh or Filippo Magnini.”

SwimSwam:  You’ve won everything a swimmer can win. Do you have a dream now?

SwimSwam : Very well, I have a question about Tokyo 2020: Do you know that video games will be included as Olympic discipline. In Tokyo 2020 for the 200 Butterfly or Playstation Challenge?

Great interview, I think this guy gets falsely villainized a lot since 99% of people here are team Phelps. On a sidetone, I’m extremely surprised that this article hasn’t gotten a single comment yet; people usually love to sound off on Chad.