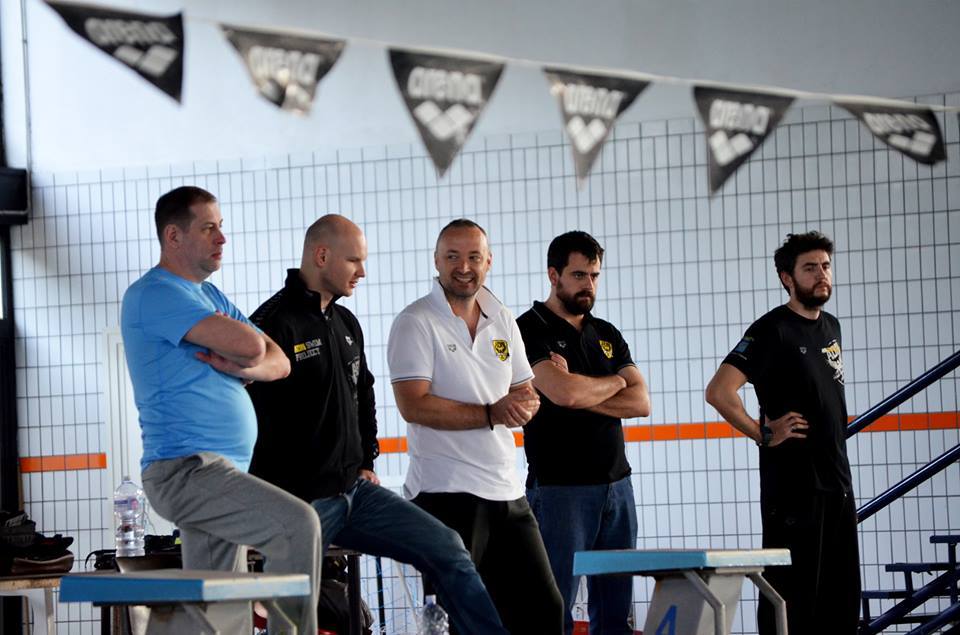 The ADN Swim Project is Europe’s first elite swimmer’s management company. Andrea Di Nino is the Head Coach, President, and Technical Director of ADN who strives to provide athletes with high-end services and help them reach the podium at major international meets.

Di Nino picked highly trained specialists to join his staff ranging from a doctor to a marketing advisor. The team implements training programs for their clients, gives technical advice, gives medical advice, and international relations and marketing advice. While ADN originates in Italy, their clients are international including Serbia’s Milorad Cavic and Russia’s Evgenij Korotyskin. Both swimmers earned Olympic medals while swimming under Di Nino.

In January of this year, South African Olympic Champion Chad le Clos made waves when he announced he’d be leaving his long-time coach Graham Hill to train with Di Nino for Tokyo 2020.

Di Nino exclusively shared his “Di Nino” method with SwimSwam Italia’s Giusy Cisale. Below is a rough English translation of the interview.

SwimSwam: ADN Swim Project is the first European swimmer’s program. What prompted you to create this project, certainly innovative for Italy?

Andrea Di Nino : Definitely my Florida experience alongside Coach Michael Lohberg, where I had the opportunity to see swimmers coming from many different nations training together every day. In the past two years in the United States I realized that in Europe there was no pro club dedicated to international swimmers interested in working in a desirable group dedicated to them. ADN was the first full time project in the world (the Race Club – an American club – was active only in the Olympic year) and its continuity for more than 10 years is for me particularly pride.

SwimSwam: Your team work concept is clear: a team thought and conceived as a microcosm, where everyone has specific tasks, knows what and how to do it and where the coach is a job coordinator for all the professionals. Is swimming therefore a team sport?

Andrea Di Nino : From the swimmer’s point of view, I mean swimming as an individual sport made in a group, so with all the dynamics of team sports – especially in the management of interpersonal relationships – but where all the work is aimed at the search for performance individual. Coming to the trainer’s figure, I agree that the head coach is the coordinator of the staff he chooses and who must also make the decisions, even the most complicated or disadvantaged.

His job is to value the internal resources (read his collaborators) by putting them at the athlete’s service, the ultimate goal of the team’s work.

Another and often underestimated task of the head coach is to protect his staff towards the outside… and for outside I mean not only towards the athlete’s federation, the media etc. but also to the same athlete who must have – in the unfortunate case of a significant problem with a staff member – as the sole interlocutor the same head coach.

SwimSwam: Do you think it is possible today to train a sample without the support of a team formed by post-urologists, biomechanics, analysts, nutritionists, and doctors?

Andrea Di Nino : If we mean by the champion the athlete who can be, at least for an Olympic cycle, the best in its distance, absolutely no and my story from 2005 to today confirms it. The great powers of world swimming (from USA to Japan to England only to make three examples) show that continuity of results is the result of the work of a team of specialists and programs based on scientific evidence. On the other hand, this is not just the case of swimming but of any other sport that has the ultimate goal of performance.

SwimSwam: Work often with samples coming to you when they already have a strong background behind them. They are not children or teenagers to shape, but internationally renowned athletes, who have been trained with only one person over the last 10 years. Are these cases easier or more difficult to handle?

Andrea Di Nino : It’s hard to give you a dry answer. Surely the pressures and expectations of adult athletes, many times already with important medals around their neck, are different from those of a 14-year-old who, at least initially, aspire to excel in the national panorama. Regarding the relationship with the previous coach on my part I have always tried to respect, at least in the first phase, the technical background of the athlete to allow him a smooth transition to two working systems. What I have always avoided is the contrast between the undersigned and the previous coach, both for the deontological respect of the colleague and for not dispersing energies, since my goal is to work for the athlete’s future not to compete with his past.

SwimSwam: What is the talent for you and what is today the role of a coach?

Andrea Di Nino : I think this term has different reading keys based on the age of the athlete and the sport practiced. If we want to focus on a senior athlete, talent for me means knowing how to manage the outside situations – read new training requirements or the stress of the call room before a final – succeeding in producing 100% of its potential in situations new to him or extremely “demanding”.

SwimSwam:  Andrea, among the many athletes trained, we all remember the Olympic silver medal of the 100 butterfly  Milorad Cavic and  Evgenij Korotyškin  (the Russian with whom Le Clos in London 2012 shared the silver of the 100 butterfly). Since January 2017, you are six head coach of Chad Le Clos, can you already make a first budget?

Andrea Di Nino : Chad is a humble person and an athlete willing to question every day, pre requisites to be a champion. Since the early days we have found a great human feeling that has helped us to build in a very short time a great technical tune that as a first result has led Chad’s chronological results last summer, scattered around the Budapest World, the European stages of World Cup and Energy for Swim 2017. He is an extremely competitive swimmer in training and this leads him to be a fighter in the race. We are working in training to store the correct pace and then leave it more free in the race to express its potential without too much constraints.

SwimSwam: Science at the service of swimming, numbers, the meticulous analyzes of the swimmer and swimming… Is this the future of swimming?

Andrea Di Nino : Absolutely yes. Statistics and scientific instruments allow comparisons and objective evaluations of various aspects that make up the athlete’s performance. Starting from the anthropometric data to the biomechanics ones to get to the analysis of the race – just to make three simple examples – you will come up with a mosaic that clearly and readily illustrates the season of a swimmer by all staff members. Numbers hardly deceive and many times help find solutions.

SwimSwam:  What is the secret of the “Di Nino” method?

Andrea Di Nino : There are no secrets or details you deserve unless you pay attention to the detail and the ability to listen to my staff. The result of the swimmer is the sum of the work of all staff members. Many times the head coach finishes on the cover when it would be right that the same emphasis would be devoted to other elements of the staff.

SwimSwam: We‘re talking about serious stuff now. Romano “de Roma”,  for years the headquarter in Campania, Caserta, is a place for you that thanks to ADN has also been emphasized in international swimming. Scudetto match Rome / Napoli: how does it end?

Andrea Di Nino : Unfortunately it has already been there, so for the return there is only one result … that of last season!

SwimSwam: Are there any principles or methods used in swimming that could be applied to Italian football?

Andrea di Nino : There may be a mutual exchange … from swimming, football should copy the corporate structure and in particular the definition of roles and clear responsibilities for all its members. Swimming – especially the Italian one – at this time could kick its results, what our football movement might need ….