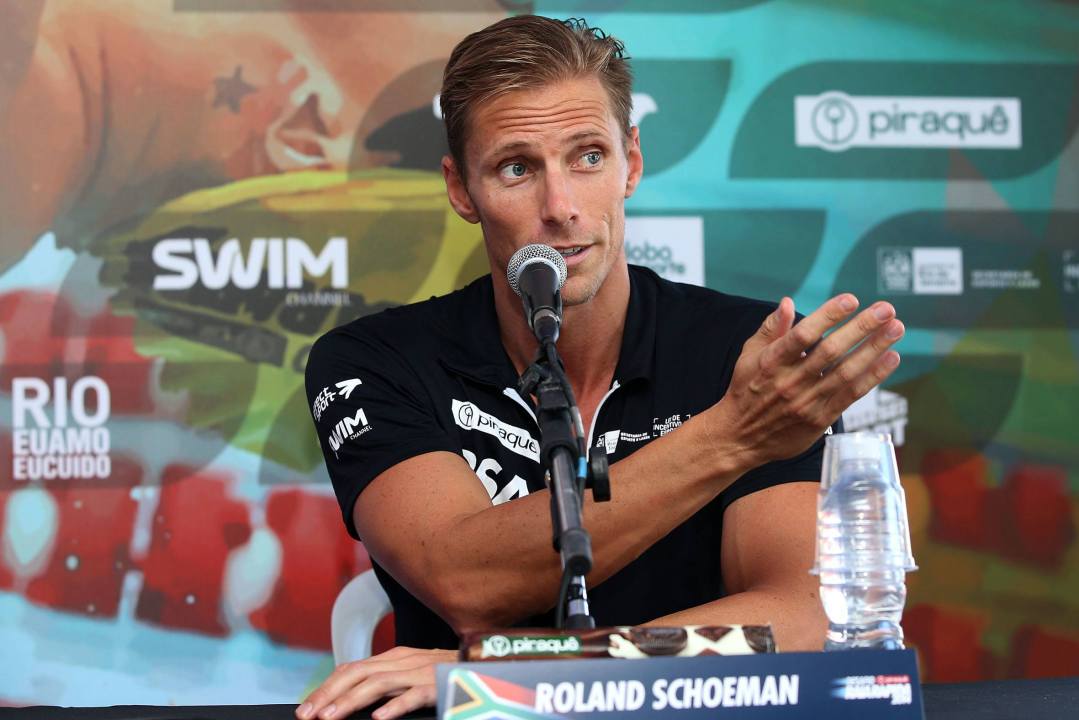 South African Olympian Roland Schoeman may see his suspension extended from one-year to at least another if WADA's request is met by CAS. Archive photo via Satiro Sodre/SS Press

On the same day that Australian swimmer Shayna Jack saw her doping ban reduced from 4 to 2 years by the Court of Arbitration for Sport (CAS), South African Olympian Roland Schoeman may see his suspension extended.

Appearing via video link today, November 16th at a CAS hearing, the World Anti-Doping Agency (WADA) challenged FINA‘s ruling that the 40-year-old freestyle ace should be banned for just 1 year after his positive test. Per ESPN, CAS  said WADA has requested a ban of two to four years. A verdict is not expected for at least several weeks.

Schoeman received a one year ban, that began in May of 2019, after testing positive for the banned substance GW501516. The World Anti-Doping Agency categorizes GW501516 as a ‘hormone and metabolic modulator’, alerting athletes in 2013 that the substance failed medical trials and was a toxic threat to health if used as a performance enhancer. (Washington Post)

Schoeman said that he believed that the positive test came as a result of a tainted supplement, though he said that by the time he was notified of his positive test, all of that month’s supply of supplements were gone and unable to be tested.

Even without proof of a tainted supplement, FINA still reduced Schoeman’s punishment from the maximum 4 years for a first-time offense. By rule, the 4 years are reduced to 2 years if the hearing body believes that it was not intentional, and generally to reduce further than that requires an athlete to prove a source of accidental ingestion.

FINA, however, reduced Schoeman’s suspension from 2 years to 1 year, even without identifying a source of contamination. FINA had not responded to requests for the full Doping Panel decision to illuminate why they chose to give Schoeman only a 1-year penalty.

With his current one-year suspension being lifted on May 17, 2020, Schoeman would not be eligible to compete at the South African Olympic Trials slated for April 7th-12th in Durban. Per Swimming South Africa’s selection criteria, to be eligible for Olympic selection, an athlete must participate at those Championships.

However, there is a caveat within the SSA Olympic selection procedures which reads, “If, at the end of the Olympic Games Swimming Trials, there are not two (2) athletes with “A” Olympic Qualifying Times for a specific Olympic event, athletes who have achieved an “A” Olympic Qualifying Time at any FINA approved event between 1 March 2019 and 27
June 2021 will be considered for selection.”

In that case, it is possible that consideration could potentially be extended to Schoeman should he achieve a FINA ‘A’ cut between his May 17th suspension lifting and the June 27th deadline. But, even that remote possibility would be taken away should Schoeman’s ban be extended another year.

Schoeman was a member of the South African team at the 2000, 2004, 2008, and 2012 Olympic Games. He won Olympic gold in 2004 as a member of South Africa’s 400 free relay, and that year he also took silver in the 100 free and bronze in the 50 free individually. He also had 3 long course World Championships, all in individual events, and is a former World Record holder in 5 events.