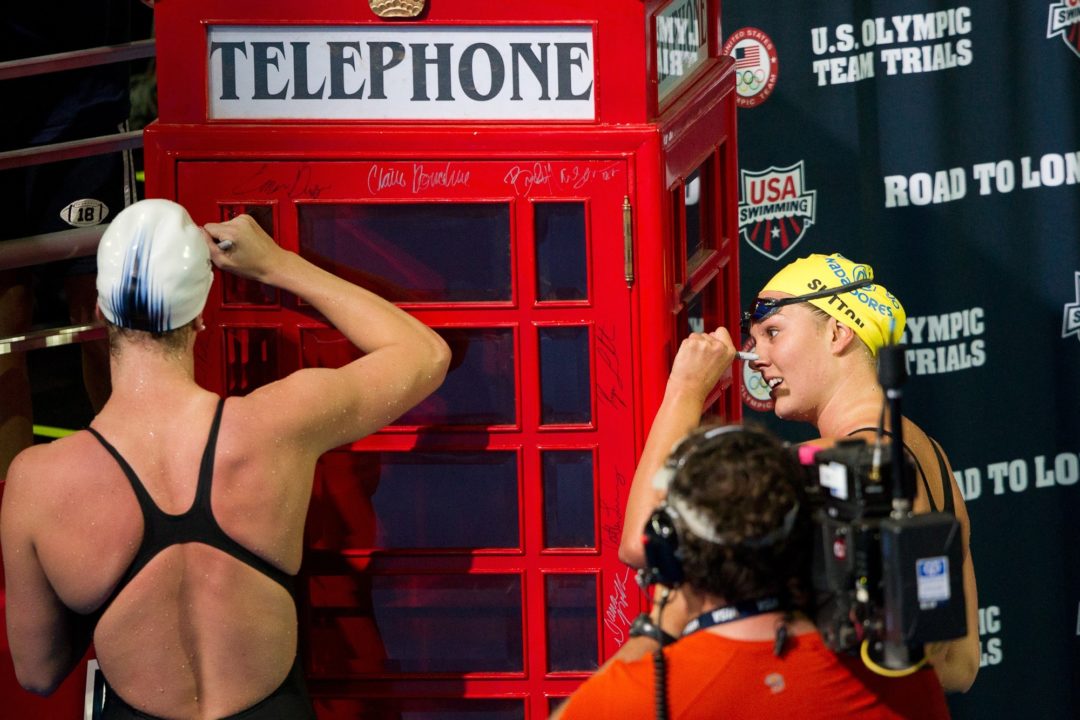 Olympians Allison Schmitt (left) and Chloe Sutton (right) were both in the top 5 in the world last year, but will someone get left out in favor of fast-rising Katie Ledecky? (Photo Courtesy: Tim Binning/TheSwimPictures.com)

Follow along for live updates of the first of 15 sessions at the 2021 U.S. Olympic Trials – Wave II, with five events on this morning’s slate.

Addy’s at the corner of Capitol & 10th Street will be SwimSwam’s headquarters and hangout this week in Omaha.

You can now travel around Omaha easily by using one of the city’s two scooter companies, Lime and Spin.

Rejoice, swims fans. Team USA will select its first swimmers for the Tokyo Olympics today, with prelims getting underway at 10am (Central).

It wasn’t long ago that the 400 free was a bit of an abyss for the Americans. At the 2011 World Championships, the U.S. A. only had one finalist in the event, Katie Hoff, and she was 7th. There were some other good times that year by Americans, but they were all at the wrong meets (the Indy Grand Prix was popular.)

As the class in the women’s 400 free has elevated worldwide, the Americans have gone with it. Allison Schmitt was 2nd at the Olympics in an American Record of 4:01.77. Chloe Sutton wasn’t great at the Olympics (she missed out on the top 8) but was a 4:04 at Trials – a time worthy of a top-5 finish in the world.

Then there’s the really terrifying swimmer. Katie Ledecky swam a 4:04.34 at the Olympics, which made her the third-fastest American in 2012. How did the Americans have three swimmers in the 400? Well, Ledecky’s swim, a 15-16 National Age Group Record, was actually a split en route to an 800 free Olympic gold in London. That’s probably more like a 4:03 if she swam to a hand-touch, rather than a flipturn.

Ledecky’s speed is much improved this year and she has already gone 4:05 in 2013 at the Mesa Grand Prix, plus gone toe-to-toe with Missy Franklin in the 200.

Here’s the twist: Sutton, who trains at Mission Viejo, is doing some work on her 200 this year, which likely means improved speed, which we saw a lot of at the SMOC last weekend. As mentioned she was a 4:04.1 last year at Trials, which is a great time, and that’s after really going after the longer events, and still sort of feeling her way through pool swimming (as compared to her history in open water.)

Out of those three, in some combination, there are two World Championship medals waiting to be had (especially with the retirement of Britain’s Rebecca Adlington and the change-in-focus of Italy’s Federica Pellegrini.)

Kate Ziegler has been racing so-so this year, though we haven’t seen her since the Orlando Grand Prix in February. She’s been focusing on a shorter schedule than we’ve seen from her in the past, going nothing over a 400 (best of 4:14 in January) so far, but she told Bob Schaller of 20 Questions Tuesday that she’s taking a break this year, so count her out for Trials.

Then there’s a whole lot of really young, very intriguing swimmers, and it’s anybody’s guess which one will pop. Becca Mann, who is both a great race and a great trainer, is already on her way to Barcelona in the 5km and 10km open water races at just 15 years old. She’s a fierce competitor, so it would be wise not to let her hang around with the lead pack for too long. There’s also Gillian Ryan from NBAC, who’s had a good two weeks of swimming in California. Ryan has said that she’s been working on her speed, and that has shown up in a big way in this 400 – having already been 4:08-low this year.

Ashley Steenvoorden had a great season in 2011, winning the National Title in this race, but since then has been unable to get under 4:10 since. Her 2013, though, has been more stable and seen a whole lot more racing. Headed into last year’s World Championship trials, she had just three 400 freestyles on her docket. Going into this year’s World Championship Trials, she’ll be riding at least 10 races of the event so far this season.

There’s also Chelsea Chenault from the Terrapins out in Cali. She peaked a bit short of Trials last year (not a great swim there – 4:12), but recovered to do very well at the end of the summer at Jr. Pan Pacs. She’s surely capable of 4:07’s as well.

Chenault is part of a big group in this 400 free that weren’t on perfect swims at Trials last year , including Georgia’s Amber McDermott, Texas A&M’s Sarah Henry North Carolina’s Stephanie Peacock, and Cal’s Catherine Breed. All four have had health problems of varying degrees in the last year, with Henry perhaps making the best recovery (she was the fastest collegiate swimmer in the equivalent 500 yard free in the country this winter.)

Haley Anderson is another contender in this race who like Mann has also already qualified in open water. She’s the two-time NCAA defending champion in the 500 yard free, but didn’t put this middle-distance freestyle race together as well in long course last year as she did in the 800 or the 400 IM, going only 4:11.00.

Ultimately, this would seem to be a battle between Schmitt, Ledecky, and Sutton. Though all three have the potential for a bad meet (Ledecky is young, Schmitt and Sutton have each done so in the last year), on paper it’s hard to bet against the defending Olympic silver medalist Schmitt to at least qualify.

Among the other two, Ledecky looks like a freight-train that won’t slow down, and I think she actually gets the upset at Trials, though right now I’d peg Schmitt to finish ahead of her at Worlds. Ledecky will be able to go out with Schmitt, who likes to put away the competition early in this race.

I’d predict that Sutton will be faster than she was at Trials last year, and still perhaps miss the team in this event.

Those we have left out of our picks, either because of uncertainty of presence, or certainty of lack of presence: Kate Ziegler, Alyssa Anderson, Katie Hoff, Dagny Knutson.

Below are three sets of top 8 picks, including best times from January 1st, 2010 onward.

Hard to pick Miss Schmitt after all her bad races above the 200 since London. Ok, perhaps she will wake up in Indianapolis, but based on what I have seen this year, it’s Miss Ledecky well ahead of the others. And among the others who will play the second place, I go with Miss Sutton who is a safe bet around 4.05. But just behind, Gillian Ryan will not be very far. If the girls look at each other behind Katie, she could surprise with her huge finish.

Ledecky under 4:01 this summer?

Ledecky followed by Sutton at World Trials. Bank on it.