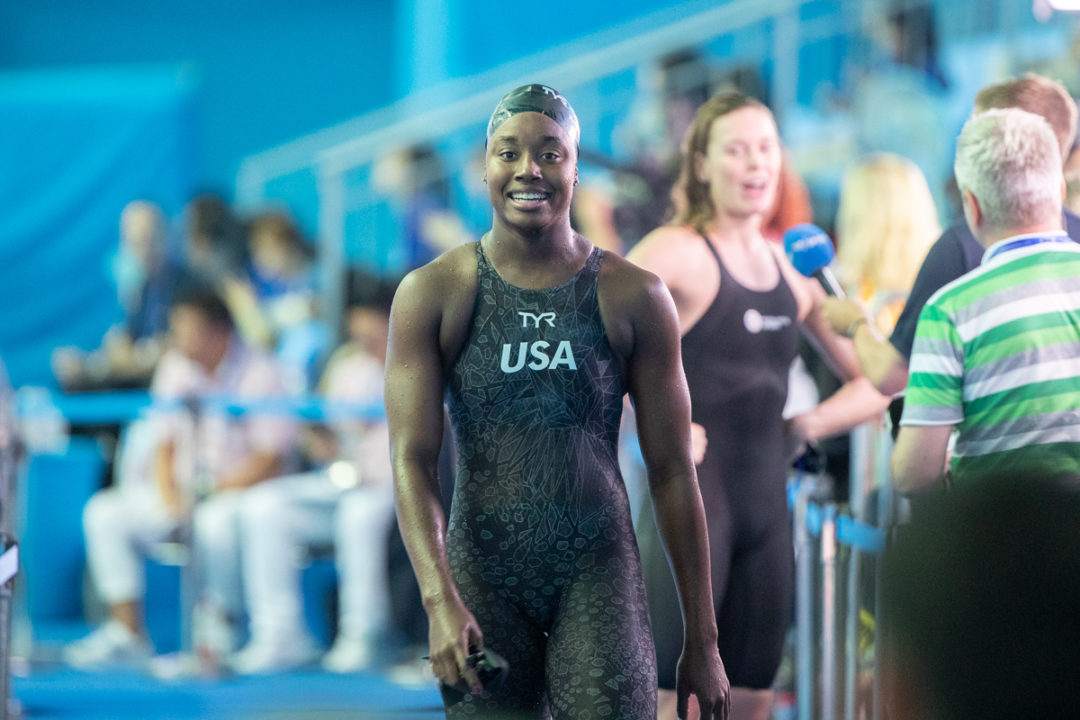 Simone Manuel had the quickest anchor leg of the field at 51.86 to bring home the World Record in the 4x100 medley relay for Team USA. Current photo via “Rafael/Domeyko Photography”

As it turns out, the decision to swap in Regan Smith on the backstroke leg panned out beautifully for the Americans. The 17-year-old set her second individual WR of the meet, clocking a blazing 57.57 lead-off leg to shave over four-tenths off of Kathleen Baker‘s 100 back WR.

Smith out-split Baker’s lead-off from 2017 by nearly a full second, and while Lilly King was a bit quicker in 2017, tonight Kelsi Dahlia and Manuel out-performed their splits from 2017 to help propel Team USA to the win and the new WR.

Looking at the rest of the field, Smith, King, and Manuel had the best splits of any team in this final. The next-closest lead-off behind Smith was Australia’s Minna Atherton at 59.06, 1.49 seconds back of Smith. For the breaststroke, no other swimmer broke 1:06– it was the Aussies again with Jessica Hansen providing the second-best split at 1:06.08, 1.27 seconds back of King.

And, while Cate Campbell ran down Simone Manuel in the 4×100 mixed medley relay and out-split her on the 4×100 free relay, it was the American Manuel who had the best anchor leg at 51.86. Campbell was also under 52 with a 51.96, helping push the Aussies past Canada.

Maggie Macneil capped off her huge week with a 55.56 fly split on Canada’s relay, the best fly leg of the field. And, despite finishing just sixth in the individual 100 fly at 57.11, Dahlia delivered a very impressive 56.16 split, the second-fastest in the field, improving on her split from 2017.

The American finished in first by a landslide tonight, with Australia touching three seconds back for silver at 3:53.42.

I like my heroines with three WRs in one meet

Rough session for Baker. In less than 4 minutes’ time, she lost 2 world records.

Hopefully it motivates her!

I have no doubt that Baker is going to come back with a vengeance next year. Would love to see her up on the podium in both backstrokes and the 2IM. She may be getting overshadowed by Smith right now, but Baker is also a generational talent.

Could’ve replaced Lilly King – gold medal winner and WR holder in the 100 breast – with Margalis (who, like Regan Smith, didn’t even swim her event individually) and still won by 2.5s. Lol.

Could have replace both regan smith and lily king with smoliga and margalis and they still would have won!!! Wow talk about depth and firepower with the American women, so happy they finally beat the Australians in a relay, the amount of desperation was intense I bet after the. Aussie clean sweep the relays last year at pan pacs.

Hell, they could’ve flown in Annie Lazor and might’ve still broken the WR!