Tokyo Day 1 Prelims: Seto And Hosszu Prepare For Battle In The 400 IM 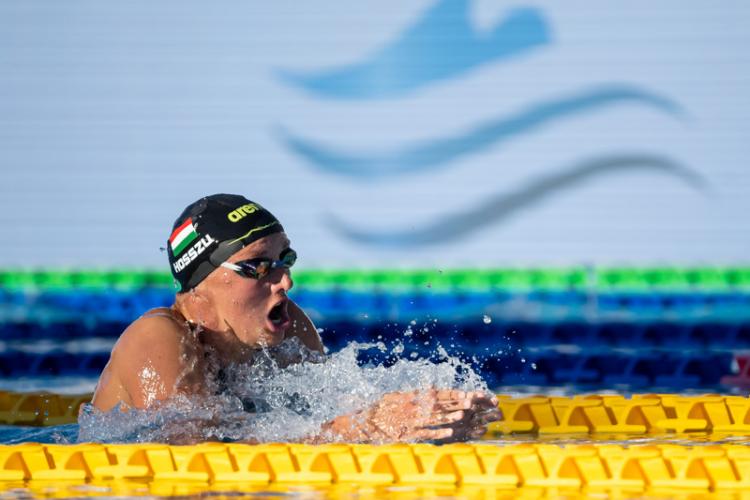 Defending Olympic champion, 2019 World Champion, world record holder, and top seed Katinka Hosszu is back in action at the Olympic Games. Archive photo via Deepbluemedia Inside

Day 1 of the long-awaited Tokyo 2020 Olympic Games is finally among us and the very first swimming prelims session will get off to an exciting start.

Japan’s own Daiya Seto will swim the men’s 400 IM as top seed, holding a 4:07.95 entry time to Chase Kalisz’s 2nd seed of 4:09.09. Seto will have a good race from lane 4 of the final heat and is going to be swimming next to American vet Jay Litherland and French young gun Leon Marchand. While those 3 represent the only sub-4:10 entry time in the heat, they will be joined by the likes of Brendon Smith of Australia, Wang Shun of China, Alberto Razzetti of Italy, among others.

The women’s 400 IM will also go down during day 1 prelims and we get out first look at Iron Lady Katinka Hosszu. Hosszu is not only the top seed here, but she is also the defending Olympic Champion as well as the world record holder. 5 years ago, Hosszu posted a show-stopping 4:26.36 in the event to take gold in Rio and establish the fastest time in history which still stands today.

After some ups and downs since 2016, Hosszu’s Tokyo swims are some of the most anticipated performances that we can’t wait to see. She will face some stiff competition from the likes of Japan’s Yui Ohashi, American butterflier Hali Flickinger, 2016 200 butterfly champion Mireia Belmonte, and Britain’s Aimee Willmott, 2019 medalist Sydney Pickrem of Canada, Margalis-upsetting Emma Weyant, and many more.

Zhang Yufei has been one of the more underrated top seeds heading into Tokyo 2020, but she wasn’t messing around when she threw down a 55.62 earlier this season in the 100 butterfly. That time for China’s Yufei makes her the quickest entrant in the event, sitting 0.04 seconds ahead of teen Torri Huske. Huske and her fellow American junior Claire Curzan will be making their Olympic debut here with their respective times of 55.66 and 56.43.

One of the biggest storylines at the 2019 World Championships was Canada’s Maggie MacNeil who emerged victorious in the women’s 100 fly, collecting gold over a talented field. MacNeil is third seed here behind Yufei and Huske. 2 years ago, in Gwangju MacNeil topped the podium which also featured Swedish all-star and world record holder Sarah Sjostrom who has entered to race the fly despite having broken her elbow just a few months ago. While her presence in the event was of much speculation in the lead-up to Tokyo, she’s the 5th seed and will no doubt put up a good fight. Fellow 2019 podium finisher Emma McKeon will also be here in the 100 fly, marking the first of 3 individual races for the distance ace.

The action doesn’t stop there, however, as we still haven’t talked about the men’s 100 breaststroke. Adam Peaty has reached legend status as the only swimmer to have cracked 57 seconds, and the owner of more than 10 of the fastest swims in history. He looks to be the heavy, heavy favorite for gold, leaving an absolute bloodbath behind him as a myriad of men hunts for silver. Among those duking it out during prelims will fellow Brit James Wilby, Nicolo Martinenghi, Ilya Shymanovich, Michael Andrew, and Yan Zibei.

Elijah Winnington stunned the field at Australian Trials when he swam an event-winning, Olympic-qualifying time of 3:42.65 400 freestyle. That killer swim for Winnington got him a top seed in the event as the only entrant under 3:43. The second closest man to the top is Italy’s 2019 Worlds bronze medalist Gabriele Detti who holds a 3:43.23. Winnington’s teammate Jack McLoughlin is next, just 0.04 seconds off Detti’s with a 3:43.27. Danas Rapsys, Felix Auboeck, and Martin Malyutin will be among those trying to break into the top 3 while American Kieran Smith and Jake Mitchell will be our first Olympic glimpse into the future of American men’s distance swimming.

The 6th and final event of the morning will be the women’s 4×100 freestyle prelims. Follow along with the official SwimSwam live cap as we analyze day 1 prelims of the Tokyo 2020 Olympic Games.

Im excited to watch. I hope nobody kneels for the anthem. Pick another country to represent if you’re gonna do that.

“I love America more than any other country in this world, and, exactly for this reason, I insist on the right to criticize her perpetually.”

your comment reeks from ignorance, I am embarrassed for you.

Given this is prelims the only anthem likely to be heard is the Japanese one. Good to see proud Japanese patriots such as yourself on SwimSwam.

Right wingers are born scared, live scared, and die scared. Here we are hours away from the first Summer Olympiad in 5 years and you’re already trembling about posture.

Colin Kaepernick. Try not to turn into a puddle before noon.

To everyone coming over to watch the prelims session tomorrow morning, be advised we have a shortage of chairs.

Will Australia’s 4x100m free heats team swim a time that would beat the rest of the teams in the finals? Their 6th swimmer at trials swam 53.2

I hope they take it easy tbh.

so i guess the EST is winner for the schedule, I can’t stay up till 3AM

2
0
Reply
anonymous
Reply to  Sam B

The cycling road race will likely finish around 10am UK time. I’ve then got to rapidly cut a hedge I foolishly promised to do before prelims at 11am. Tough Olympic schedule.