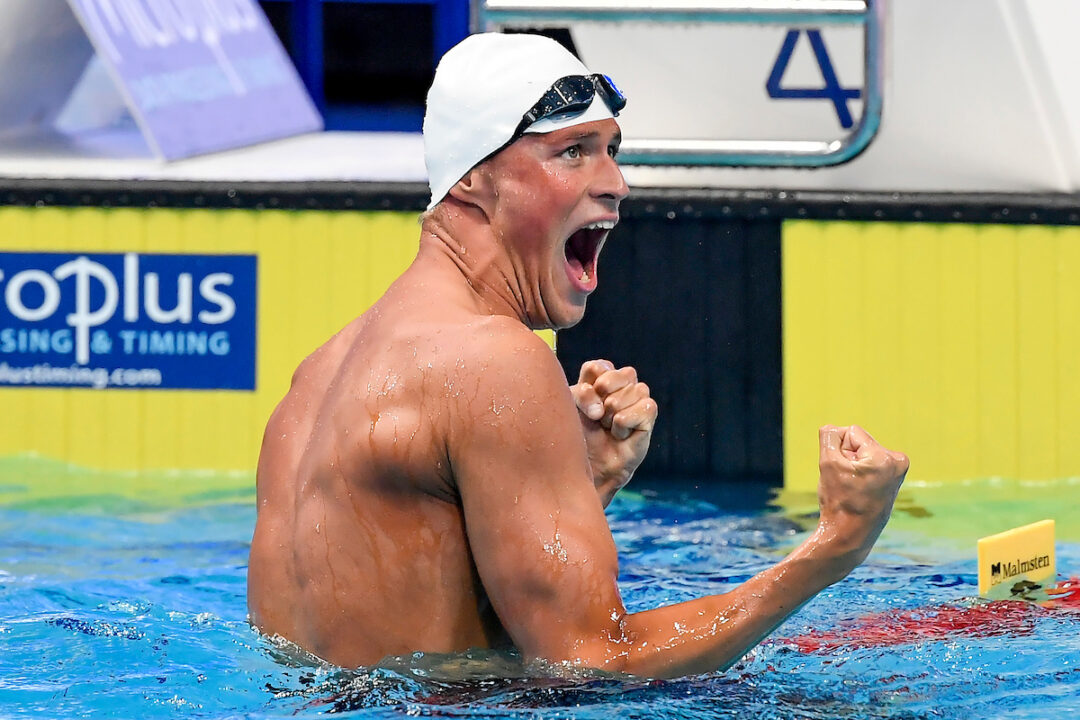 While it's coming to a close, swimming at the Tokyo 2020 Games isn't over yet. Get caught up here as we prepare for the 15th and final session. Archive photo via Andrea Staccioli / Deepbluemedia / Insidefoto

It has been an incredible week of racing in Tokyo, but the 15th and finals session of Olympic swimming is finally upon us. The Games will certainly be ending on a high note as day 8 holds an exciting set of events in the men’s and women’s 50 freestyle, the men’s 1500 free, and both 4×100 medley relays.

In the women’s sprint, defending champion Pernille Blume of Denmark will be gunning for a repeat title but will need to be at her absolute best in order to do so as the field of talented women joining her will leave nothing in the pool.

Leading the pack is Emma McKeon who performed 2 straight Olympic records during the prelims and semi-finals of the event. McKeon started with a 24.02 in her first 50 free of the meet and followed that performance with a 24.00 to win semis. As she approaches the 23-second range, McKeon could potentially win her 5th medal of the Games to become the most decorated Australian Olympian in history. She’s currently tied at 9 career medals which is the same number as fellow Aussie swimmers Ian Thorpe and Leisel Jones.

Blume wasn’t far behind McKeon during semis with a 24.08 (0.01 second off her gold medal time in 2016 of 24.07) but she and McKeon are certainly not a lock yet for the podium. Coming in at a 24.13 was world record holder Sarah Sjostrom who has 1 last shot at a medal here after falling short in the 100 butterfly and freestyles. Sjostrom broke her elbow in early 2021 and hasn’t been at her prime in Tokyo. The 50 free might be short enough, however for Sjostrom to make some noise and her 24.13 in the prelims left us wondering what else she has in store.

Only 0.32 seconds separated McKeon from the 8th seed heading into the final Wu Qingfeng of China, meaning that the race is set to be undoubtedly electric. Among those competing will be 2008 bronze medalist Cate Campbell, fresh off a bronze medal 100 freestyle performance, American swimmer Abbey Weitzeil, Polish comeback star Kasia Wasick, and 2012 Olympic victor Ranomi Kromowidjojo. As those 8 women take to the pool for the less-than-half-a-minute race, the only thing that’s certain is that it’s anybody’s race.

Just as Australia’s Emma McKeon is in the women’s race, 100 freestyle champion Caeleb Dressel is going to enter the men’s 50 free as top seed. Dressel threw down a 21.42 during semi-finals which was actually 0.10 off his prelims time of 21.32. Dressel displayed his dominance in the event recently at US Olympic Trials when he swam a blistering 21.04 to win the event and match his lifetime best in the event from 2019. That means that while he already has the top time, Dressel has the potential for more and could be putting Cesar Cielo’s elusive 20.91 world record on alert.

Florent Manaudou will be making a return to the Olympic final for what will be his 3rd straight appearance in the event. Manaudou has a near-perfect Olympic record in the 50 freestyle, having won gold at London 2012 and silver to Anthony Ervin at Rio 2016. It will require an improvement upon his 2nd place semis swim of 21.53 for Manaudou to catch Dressel and collect his second career gold but a podium finish for the French all-star is certainly within reach.

An exciting result occurred during the semi-finals of the 50 freestyle as Brazil’s Bruno Fratus and Greece’s Kristian Gkolomeev both delivered a 21.60 which was good enough for 3rd overall. Fratus is one of the event’s most successful swimmers in history and holds an incredible 90 sub-22 swims. As he goes for his 91st 21 50 freestyle here, his bigger goal will be to land within the top 3 and pick up his first-ever Olympic medal. Gkolomeev is a bit newer to the elite scene than Fratus is but still as a history in the event worthy of mention. He swam to bronze in the event 8 years ago at the 2013 Mediterranean Games and managed to pull off a silver medal swim at 2019 World Championships. He added a European Championships silver and bronze to his resume in 2018 and 2021, respectively, and like Fratus will be on the hunt for his first Olympic medal.

While Fratus and Gkolomeev tied for 3rd, Ben Proud and Michael Andrew tied for 5th place in the semi-finals, each with a 21.67. Ben Proud is similar to Fratus and Gkolomeev in that he’s been racing at a high level for many years but has not yet worked his way onto an Olympic podium. Proud won bronze in the 50 free at 2017 Worlds, silver at 2020 Euros, and gold at the 2014 and 2018 Commonwealth Games but fell to 4th four years ago in Rio. American Michael Andrew is the top seed Olympic debutant in the field and has so far fallen short of a podium finish in both the 100 breast and 200 IM. An interesting aspect of Michael Andrew’s unique skillset is that he has become known for his relatively weak freestyle leg on the IM but is still able to produce an elite-level swim when that 50 freestyle is in isolation. With a final shot for an individual medal in Tokyo 2020, Andrew is not out for the count yet.

Rounding out the men’s field here will be Italy’s Lorenzo Zazzeri and Thom De Boer of the Netherlands who got into the final with a 21.75 for 7th and a 21.78 for 8th in the semi-finals, respectively. With a lethal field ahead of them, they provide much intrigue as the race approaches and have the potential to pull off an upset as they eye the podium.

In the men’s 50 freestyle, Italy’s Gregorio Paltrinieri was outside of the top 3 during prelims with a 14:49.17. The defending champion from Rio certainly has much more in store for the final though, having swum a 14:34.57 5 years ago for gold and more recently, a 14:33.10 European record in August 2020. Paltrinieri has a dominant record in the event and has picked up a medal at all 4 of the most recent World Championships including 2015 and 2017 gold. With an impressive set of podium finishes in the book, Paltrinieri couldn’t quite pull off the win at the 2020 European Championships earlier this year.

The USA’s Bobby Finke was on fire in Omaha when he took Olympic Trials gold in both the 800 and 1500 freestyles to qualify for Tokyo. Finke won his events at Trials with a 7:48.22 and 14:46.06, respectively, and followed that up with a pair of America records as he made his Olympic debut. During the 800 freestyle prelims in Tokyo Finke hit a 7:42.72 NR to break Michael McBroom’s former mark of 7:43.60 from 2013. He then hit a 7:41.87 in the final to bring the record down again and win Olympic gold. Finke qualified second into the 1500 freestyle final with a 14:47.20 and will attempt a second straight title as he eyes the 14:39.48 American record set by Connor Jaeger in Rio.

Right behind Finke in the prelims, Germany’s Florian Wellbrock swam a 14:48.53 to advance into the final as third seed. Despite all the talent we’ve already discussed, Wellbrock could be considered a favorite to win gold here considering the fact that he’s the reigning world champion. At Gwangju 2019, Wellbrock took out his competition with a 14:36.54 for gold which was just off his own German record of 14:36.15 from the year before. The 1500 will be a shot at redemption for Wellbrock after a podium miss in the 800 free a few days ago when he hit a 7:42.68 for 4th.

The session will end with a set of medley relays as the United States aims for a repeat of their 2016 gold medal performances in both the women’s and men’s events. While they have a shot at the title in both, their chances at picking up a final 2 gold medals seem slim considering their 2nd and 6th place finish in the respective women’s and men’s heats. The final will of course feature different lineups across the board, but in order to make the most of that fact, the US will need to make some efficient choices.

The Canadian women put up the top time during the prelims of the relay without 2 of their biggest stars on the roster: Kylie Masse and Penny Oleksiak. They will likely be putting forth 100 butterfly gold medalist Maggie MacNeil, 100 backstroke silver medalist Kylie Masse, 4th place finisher in the 100 freestyle, and 2016 Olympic champion Penny Oleksiak, and whichever breaststroke they think will have the best shot at keeping up.

Similar to the Canadians, the Australian women’s weakest leg on this relay is the breaststroke. The breast was the only stroke 100 where Australian women didn’t reach the podium as Kaylee McKeown won backstroke gold, Emma McKeon won butterfly bronze and 100 freestyle gold, and Cate Campbell won 100 freestyle bronze.

On the men’s side, Italy managed to advance first into the final with their impressive lineup of Nicolo Martinenghi, Alessandro Miressi, Thomas Ceccon, and Federico Burdisso. Their prelims time of 3:30.02 was slower, however, than all 3 of the top times at 2019 Worlds Championships, meaning that as countries sub in their premier sprinters, they’ll have their work cut out for them to hold the lead.

Among those who we’ll see in the finals that will make the biggest difference for their nation is Great Britain’s Adam Peaty on breaststroke, Caeleb Dressel of the USA, and the ROC’s Kliment Kolesnikov and Evgeny Rylov.

Honestly can’t get over harsh you guys are on Andrew ..Miller dropped like a low 59 in Rio (yes he won a bronze in the 100m breast stroke too) and you guys beat us Andrew will do about the same maybe a mid-high 58… don’t think Ryan will break the WR again but he’ll comfortably be a low 52 Dressel will out split Guy and it will be down to Apple vs Scott and who can drop the lower 46 …may the force be with you

The true is there is not a better choice, please stop with your attacks

MA can’t ascend each round of an event if he only does it once. Big brain stuff from the US coaches

Pickrem and Weitzeil in for medley

not surprising for Canada. Pickrem was also in worlds final 2019. She seem reliable at least for 107.. maybe she will get under that tonight. Not sure what happening with wog which is quite unfortunate. .. she was mid 106 prior to pandemic.