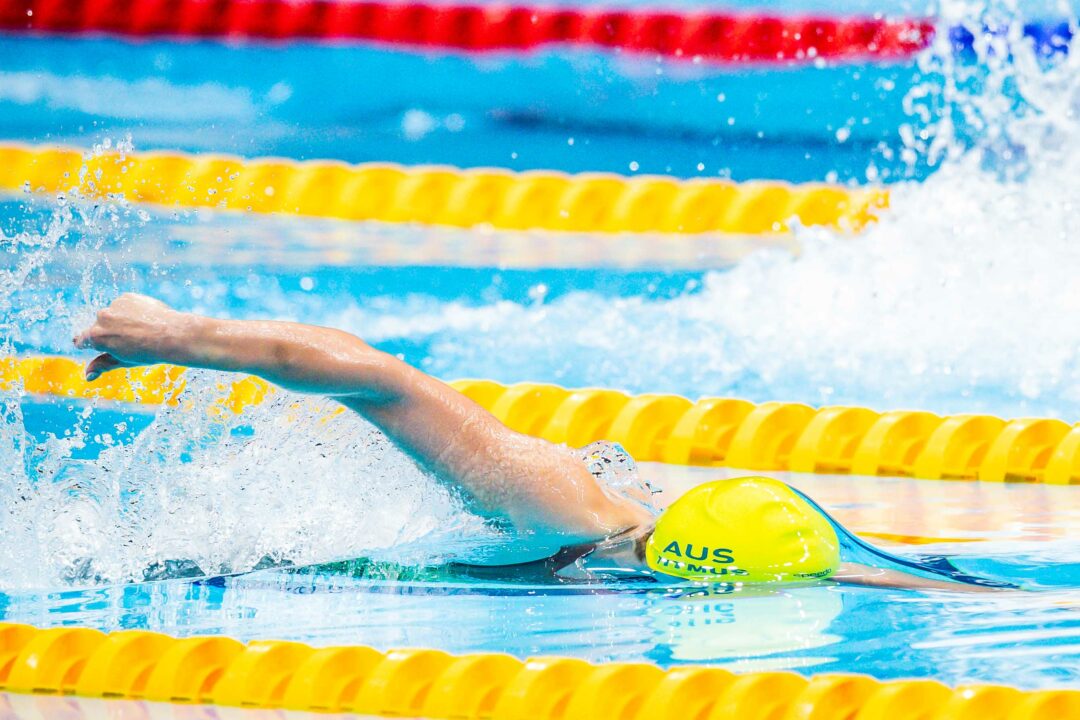 While she didn't make it to the top of the podium, Ariarne Titmus still pulled off an impressive Commonwealth record of 8:13.83. Current photo via Jack Spitser/Spitser Photography

The big question heading into the 7th finals session at the Tokyo 2020 Games was whether or not Australia’s Ariarne Titmus would be able to deny American Katie Ledecky a 3rd straight Olympic title in the women’s 800 freestyle.

The answer to that question wound up being no as Ledecky pulled off the victory with an 8:12.79 for gold but Titmus managed nonetheless to notch an impressive 8:13.83 for the silver medal.

The women’s 800 was actually Titmus and Ledecky’s 3rd battle of the meet, following the 200 and 400 freestyle finals where Titmus did end up defeating the reigning Olympic champ Ledecky. In the 200, Titmus notched a 1:53.50 in the final for a new Olympic record while Ledecky missed the podium in a 1:55.21 for 5th. The 400 freestyle was the closest race of the lot as Titmus nabbed the gold medal with a 3:56.69, just ahead of Ledecky’s 3:57.36.

By taking the silver medal in the women’s 800 freestyle, Titmus became just the 5th Australian woman to win a medal in the event in 14 editions of the race. While 5 Australian’s have officially medalled in the event, Australia technically only has 4 medals. That’s because in 1980 when Australia, along with a number of other nations, boycotted the Games in protest of the Soviet Union’s invasion of Afghanistan. Despite the protest, Australian swimmer Michelle Ford decided to attend the Games in Moscow, competing under the Olympic flag.

After Ford’s 1980 victory, Julie McDonald and Hayley Lewis got onto 2 straight Olympic podiums in 1988 and 1992. McDonald took bronze in the event in ’88 while Lewis was silver in ’92 with American Janet Evans taking gold at both Games. After Lewis in 1992, Australia was off the 800 freestyle podium at every Olympics until Tokyo 2020 when Titmus ended the streak.

Titmus will walk away from her debut Olympic Games with 2 individual gold medals, an individual silver, and a relay bronze in the 4×200 freestyle relay. That medal haul for Titmus is just one short of the record for most Olympic medals won by an Australian at a single Games which currently sits at 5 (Ian Thorpe (2000), Shane Gould (1972), Alicia Coutts (2012), Emma McKeon (2020)).

There is no doubt that Ledecky will be a force in three years’ time. I also feel that more and more swimmers will close the gap that Titmus did this year. Mcintosh, Grimes, Tuncel and Fairweather, have all shown the potential to get to that level.

It’s going to be exciting that’s for sure.

Kylie Masse gets her own article for silver, while Kaylee doing the double gold plus Emily’s bronze is barely a footnote

Where is Dean B. painting after the 800……I like his energy, but its about the swimmer not coach

To be entirely fair he didn’t ask them to point a camera at him, and he is like that when the cameras are off too.

I don’t love it and wouldn’t behave that way, but it is 100% authentic.

The days of Katie going under 8:10 may have ended, and if she wants to continue looks like Titmus could dip below 8:10.

Agree on ledecky (unless she swims a much smaller program) but would not take for granted that timus will ever go faster than she did in Tokyo. Ledecky and pretty much every other distance swimmer ever has peaked by 20 or 21… enjoy the moment while you can!

Yozhik,
you are comparing two incomparable things. Ledecky was a precocious star at 15. Titmus wasn’t. I think Titmus has another gear and can become even better.

I’m thinking since she’s done with Stanford now she’s going back to her old coach and things will get better for her!

Ledecky went 15:20 at standford, and has gone 1:54 mid many times in the last several years. She hit her 2nd best time in the 400 in Tokyo. Her decline has little to do with leaving Bruce imo, and more to do with burnout. Like imagine being Ledecky and grinding out distance sets for years and years leading up to 2016? Then imagine going forward and continuing to grind those sets as you’re getting a Stanford degree. Nobody can be at 100 percent forever.

Ledecky may have been swimming to win, and she won.

She commented on how not prepared she was for that 800. After a day off, she said her whole mind and body switched off. So in terms of finishing times, she was quite pleased and surprised.