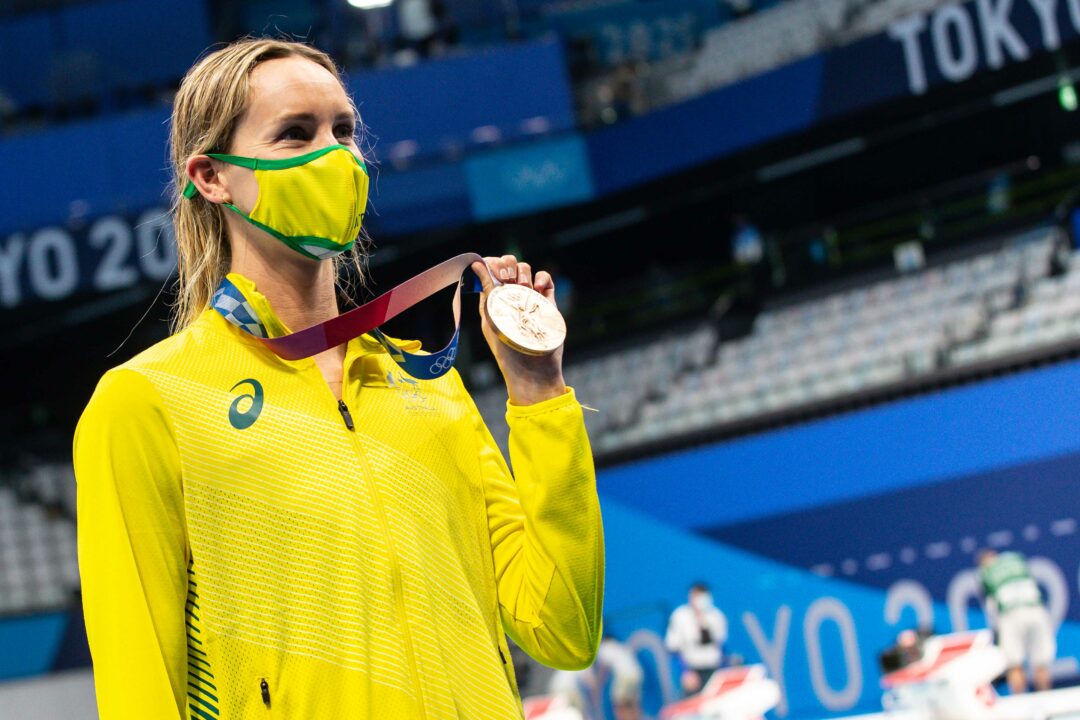 Emma McKeon is 4-for-4 in terms of podium finishes thus far at Tokyo 2020 and could collect up to 3 more before the Games end. Current photo via Jack Spitser/Spitser Photography

Oceania continued to find success on day 6 at the Tokyo 2020 Olympic Games including a double-medal performance in the women’s 100 freestyle. Emma McKeon came out on top in the event with a 51.96 for the gold medal and a new Olympic record. Her swim was an improvement upon the 52.13 OR from earlier in the meet.

Teammate Cate Campbell joined McKeon on the podium with a 52.52 for bronze, marking her first-ever Olympic medal in the event. Finishing in between the Aussie duo was Hong Kong’s Siobhan Haughey with a 52.27 for silver.

Emma McKeon‘s swim is the latest in a number of impressive swims at the Tokyo 2020 Olympic Games. She first picked up a gold medal in the women’s 4×100 freestyle on day 1 and followed that up with individual bronze in the 100 butterfly. She got a second bronze medal in the women’s 4×200 freestyle relay and her individual gold in the 100 free marks 4-for-4 podium finishes.

4 medals in Tokyo, combined with the 4 medals that she won in Rio 5 years ago give her a total of 8 career Olympic medals. Considering that McKeon is likely going to racing for gold in another 3 events (individual 50 free, mixed 4×100 medley, and women’s 4×100 medley), she could be on track to break a number of Olympic medal haul records.

Records That Emma McKeon Could Break At Tokyo 2020

McKeon only needs to win 1 more medal at Tokyo 2020 in order to catch Ian Thorpe and Leisel Jones as the most decorated Australian Olympic in history. If she wins her maximum of 3 more Olympic medals she would break the record by 2 medals with 11. Now that she has 3 Olympic gold medals (4×100 freestyle in 2016 and 2020, and 100 freestyle in 2020) she only needs 2 more to pass Dawn Fraser, Libby Trickett, and Betty Cuthbert‘s record of 4 career Olympic gold medals, and 3 more in order to catch Ian Thorpe who won 5 overall.

If she win 2 more medals in Tokyo, she will have broken the record for the most Olympic medals won by an Australian at a single Olympic Games which currently sits at 5. If McKeon wins another 3 medals and brings her Tokyo 2020 total up to 7, she will tie for second on the list of most Olympic medals won by any individual at a single Games. Michael Phelps (2004, 2008) and Gymnast Alexander Dityatin (1980) share that record at 8.

They are not all gold though. Spitz, Phelps, and soon Dressel are the litmus test for legendary status in multi discipline swimming. Mckeon has merely achieved greatness.

Strange, because Americans seem to keep insisting that the overall total of medals matters more than number of golds.

If McKeon wins 7 she will be the first woman from any country in any sport to win 7 medals in a single Games. That’s legendary to me.

They just use whichever method makes them look better.

Americans shouldn’t count because it’s easier to get relay golds.

See how stupid this sounds?

Historic comparisons should be done in context also. More events have been added to the program over time e.g 50 free, 4×200 relay for women, mixed medley ( added this olympics for the first time.).

This is true. But competition and participation have increased dramatically, and semifinals are a thing now. Entering 7 events now requires many more swims than it would have 50 years ago. And a number of additional events aren’t really relevant: a woman who wins the 50 free isn’t ever going to enter the 1500, so having it added as an event doesn’t diminish a sprinter winning 7 medals.

If Emma converts all 3 she will break the record for most medals won by a female at a single Olympics, which is currently 6 held by Kristin Otto (if you even count that 🤷🏼‍♂️)

This record is what I thought the article would be about, so I was surprised that it wasn’t mentioned.

The legendary superstar, Shane Gould, still holds the record for most INDIVIDUAL medals in one Games at 5 from Munich 1972. The Australian relays weren’t as powerful then as they are now. If the relays were as strong in 1972 as in 2021, Shane would have left Munich with 7 total. Plus her three solo world records. All at the age of 16!

“4 medals in Tokyo, combined with the 2 medals that she won in Rio 5 years ago give her a total of 8 career Olympic medals”

I think she won 4 medals in Rio, which would make the math work!

“ Considering that McKeon is likely going to racing for gold in another 3 events (individual 50 free, mixed 4×100 medley, and women’s 4×100 freestyle)”

That should be the women’s 4×100 medley. They already swam the 4×100 free. It seems like there’s always a few easy-to-catch mistakes in these articles. I wonder if they’re proof read at all before posting lol