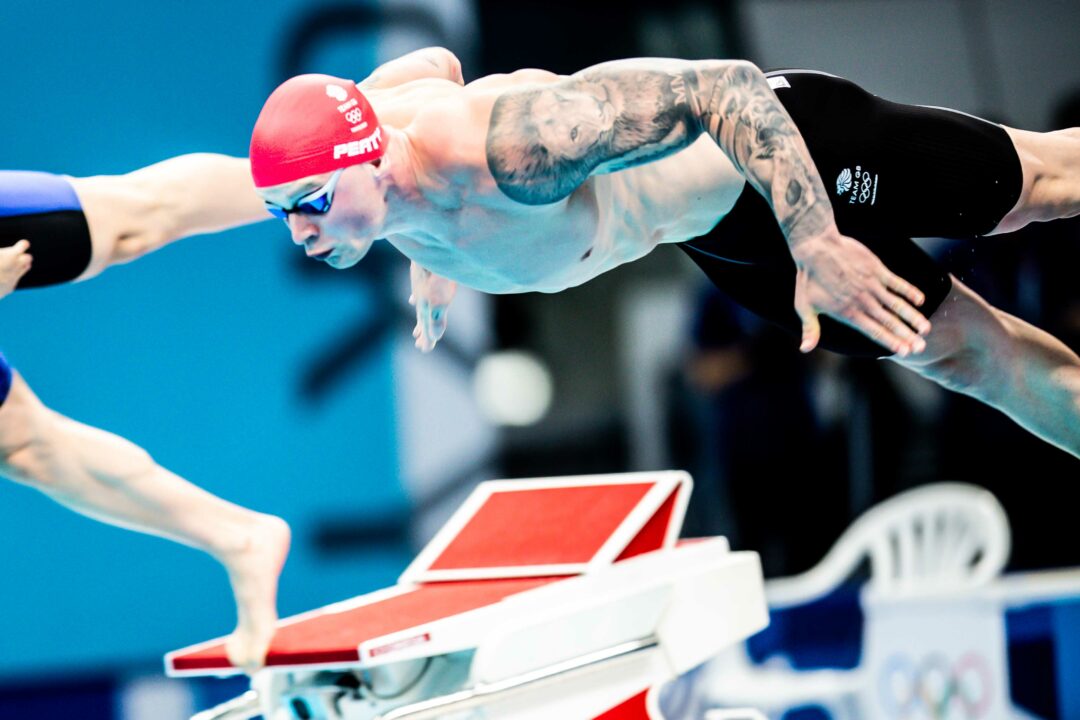 Adam Peaty was in his element on day one, sporting a mustache while comfortably winning the 100 breast semifinal. There were no European medalists on day one. Current photo via Jack Spitser/Spitser Photography

While Europe did not win any medals on day 1 of the Tokyo Olympics, it was a strong day of racing for Loughborough-based swimmers Adam Peaty, James Wilby, and Marie Wattel.

France’s Wattel broke 57.00 for the first time in the 100 fly during semifinals. Instead of sneaking just under the mark, she crushed it by .84 to set a new French National Record time of 56.16. Her lifetime best time going into this meet was a 57.00 from the 2019 World Championships.

The previous record was set at 56.89 at the 2009 World Championships by Aurore Mongel. Wattel, who finished 24th in this event at the 2016 Rio Olympics, is now going into the Tokyo Olympic final in 2nd place.

Wattel broke one of five total European National Records that fell on day one. Six, actually, if you count the fact Great Britain lowered their 400 free relay National Record once in prelims and again in finals.

Their team of Anna Hopkin,  Abbie Wood, Lucy Hope, and Freya Anderson took down their own British National Record, which was set at the recent European Championships, with a 3:34.03 in prelims and a 3:33.96 in finals to place 5th.

World Record holder Peaty comfortably dominated the 100 breaststroke while sporting a mustache. He posted a 57.56 to win prelims and  57.63 to win semifinals where he finished with about a half a second lead over 2nd place finisher Arno Kamminga.

Earlier, the Netherlands’ Kamminga took down the Dutch National Record in prelims with a time of 57.80.

Peaty was still off his World Record from 2019 by about .68 in prelims, but who knows what a clean-shaven Peaty can do in the finals on Sunday (if he decides to shave the ‘stache).

In the same race, his British teammate Wilby took 6th with nearly identical times of 58.99 and 59.00 in prelims and semifinals, respectively. He was about half a second off his lifetime best time from the 2019 World Championships.

Continental and National Records on Day 1

*There were no European medalists on day one

I’m not at all surprised Europe have won no medals.

I’m in Europe and watching the events live. It would be bad enough adjusting to Tokyo time, but flipping morning and evenings has tipped me over the edge. I’m already totally exhausted and more than a little bit disoriented. I’ve no idea at all what time it is.