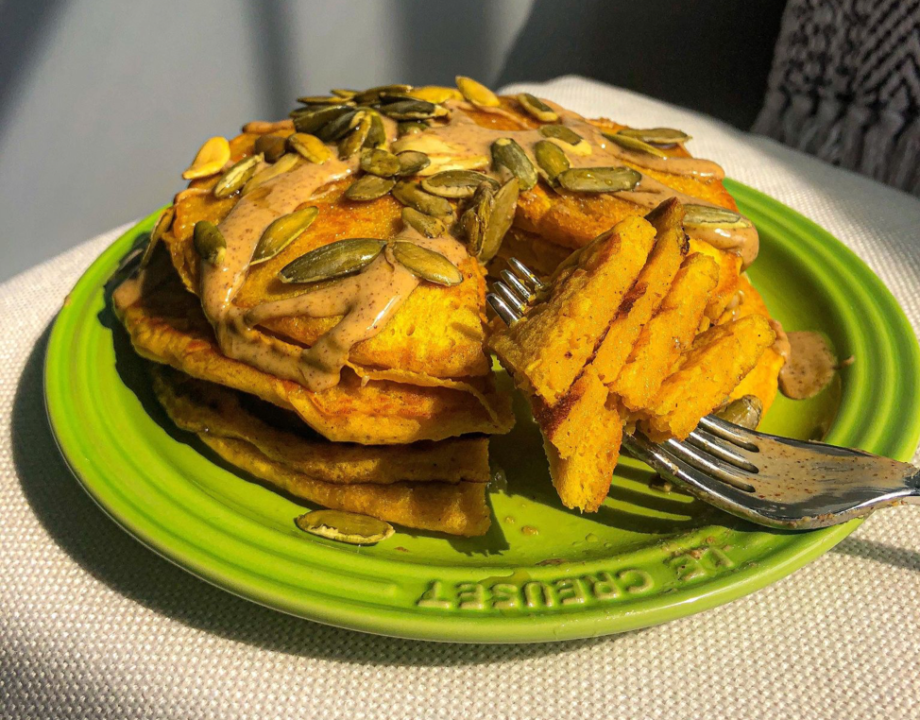 I’m so excited to share with you my favorite fall themed recipes, perfect for easing into the chilly weather and getting into the fall spirit. Current photo via Zoe Gregorace

The Hungry Swimmer: Creative Ways To Satisfy Your Sweet Tooth 3.0

While balance and moderation is important, sometimes it’s fun to recreate your favorite sweets with a healthy twist.

Here are some meal ideas as inspiration for both the seasoned plant-based eaters and those who are looking for a place to start.

The Hungry Swimmer: What I Eat in a Day as a ‘Swammer’

If you’re still lost on what to eat as a former swimmer, check out some meal ideas below as I walk you through what I eat in a typical day as a swammer!

Cauliflower serves as a low calorie, high fiber, nutrient dense carbohydrate alternative that is ideal for the high performance athlete.

Ah, the temperature is dropping, the leaves are changing and the pumpkin spice is back! Fall is officially here people and I am so pumped. Besides the spooky movies and candy corn, the best part about fall are the iconic flavors of the season. From cinnamon apple to pumpkin spice, what’s not to love?

Of course, breakfast is the most important meal of the day. Especially when it’s this delicious.

Now this is the ultimate fall stack! These incredibly fluffy pancakes just melt in your mouth and you won’t believe they’re are homemade. If you don’t have the Bob’s pancake mix, you can use any pancake mix you have on hand or you can quickly whip up your own batter. Check out my previous article, Upgrade Your Pancake Game, for the details on my 3-ingredient pancake recipe!

In a large bowl, combine the pancake mix, water, pumpkin puree and pumpkin spice with a fork until smooth. Pour the batter into a sprayed pan and cook over medium low- medium heat for 1-3 minutes or until bubbles form around the edges. Once bubbles appear, flip and cook for another 2 minutes. Repeat these steps for the remainder of the batter. Top the stack with almond butter, pumpkin seeds, maple syrup and devour!

Move over banana bread, there’s a new baked treat in town! Filled with pumpkin spice goodness and loaded with dark chocolate chips, these gooey dark chocolate chunk pumpkin blondies will be the talk of your socially distanced pow-wows.

First, preheat the oven to 350 F. In a large bowl, combine the peanut butter, pumpkin puree, maple syrup, egg, coconut oil and almond milk. Next, carefully fold in the oat flour, pumpkin spice, cinnamon, coconut sugar and baking soda. Be sure to thoroughly fold in the dry ingredients and tease out any apparent clumps in the batter. Next, fold in the chocolate chunks and pour the batter into a greased 9×13 inch pan. Bake for approximately 25-30 mins then let the blondies cool for 5-10 mins. After cooled, slice the tray into 3 rows of 4 to make 12 individual square blondies. Enjoy!

Check out my page for more recipe inspiration and be sure to share your student athl-eats with me @whatzoeeeats.

Zoe Gregorace is currently studying Nutrition Policy at the Tufts Friedman School of Nutrition Science and recently graduated from Tufts University, where she earned a Bachelor of Arts degree in Sociology and was a proud member of the Tufts Swimming and Diving team (Go Jumbos!). During her 16 year career as a competitive swimmer, she developed a passion for sports nutrition. She enjoys writing on the topic of nutrition, health and wellness and posts her meal creations on her Instagram page @whatzoeeeats. As a former college swimmer, she strives to share recipes and nutrition tips to promote balanced eating and optimize sports performance.

Oh, lawdy, I have got to fix those recipes ASAP. If the tastes look anything like the photos, it’s going to be some good eating!

7
0
Reply
Braden Keith
Admin
Reply to  He Said What?

I’ve mad a few. Every one has been as good as Zoe makes them look, and they’re all super easy.

More from Zoe Gregorace
See All