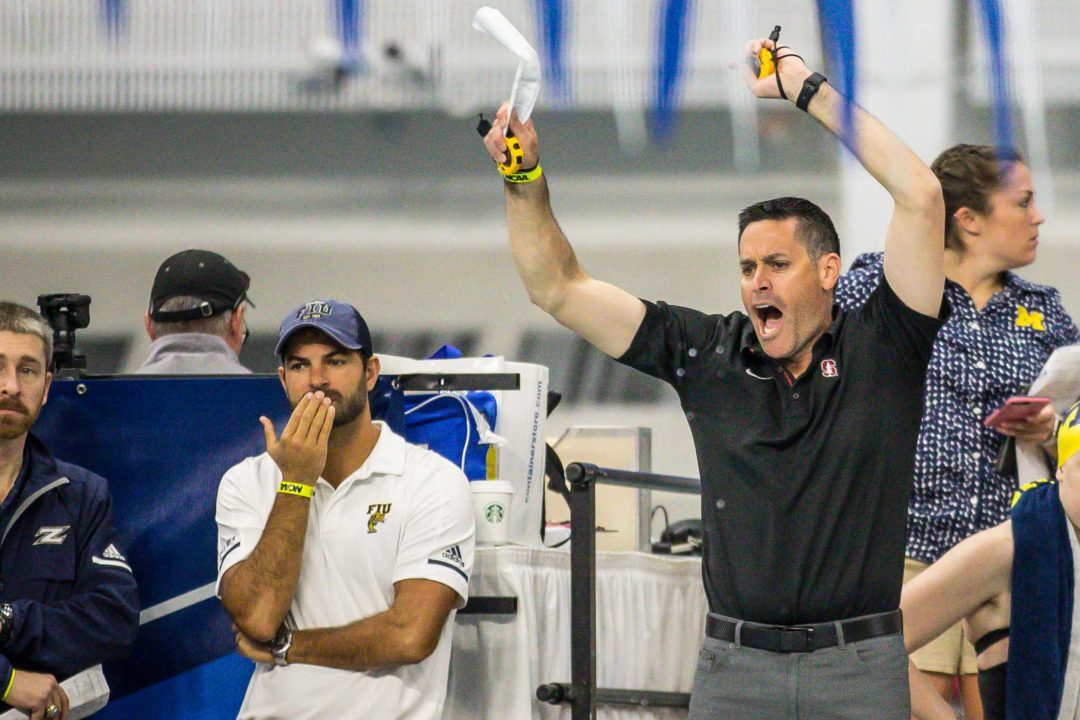 After a down year, Greg Meehan's Stanford Cardinal have reloaded and look primed to shoot back up the national rankings in March. Current photo via Jack Spitser/Spitser Photography

Earlier in the week, we scored out a hypothetical NCAA meet based on midseason results, with the defending champion Virginia Cavaliers holding the lead with Alabama, Stanford and NC State in hot pursuit. Now we take the next step in the analysis: who is firing on all cylinders so far this season and poised to climb up the national rankings in March? Who has some work to do in the spring semester to match last year’s performance? What national-level swimmers have some ground to make up over the next two months? We dive into the data below.

As a reminder, projected points include swimming only and do not account for diving points.

Welcome (Back) to the Party

As with the men, there are a few teams who did not score at last year’s NCAAs who project to make noise at this year’s meet, though none of these teams seem likely to threaten for a trophy like the Arizona State men. The Sun Devil women lead this group, with distance freestyler Emma Nordin projecting to score 52 points with the top time in the country in the 1650 to go along with the 2nd fastest 500 free and 4th fastest 200 free. The Penn Quakers also join this list, with Lia Thomas, a transgender swimmer, holding the NCAA’s top time in the 200 and 500 free, along with the 6th fastest time in the 1650.

Auburn also projects to score 22 points in Ryan Wochomurka’s first year as head coach after failing to score at last year’s NCAA meet. 18 of those points come via relay, while senior Emily Hetzer is projected to score 4 points in the 500 free.

Updated to reflect only 2021 swimming points. 2022 projections based on scoring current national rankings.

As we alluded to last week, the Stanford Cardinal seem primed to make a formidable challenge for the top spot. Superstar freshmen Torri Huske and Regan Smith lead the way for a reloaded Cardinal, who also add Taylor Ruck and Lillie Nordmann to the roster after Olympic Redshirt seasons. All of last year’s individual NCAA scorers return, most notably Brooke Forde, who has won an NCAA title in both the 500 free and 400 IM in her Stanford career.

Stanford’s PAC 12 rival, the USC Trojans, also currently project to score 136 points more than last season. A big chunk of that comes in the relays, where USC is currently projected to score 72 points, but sophomore standout Kaitlyn Dobler also currently holds top 8 time in 100 and 200 breaststrokes and the nation’s 9th fastest 50 free. Northwestern transfer Calypso Sheridan, who followed coach Jeremy Kipp from the Michigan lakeshore to Hollywood, also projects to score in the 100 back, 200 IM and 400 IM.

A final significant riser thus far has been the Tennessee Lady Volunteers, who project with a seventh place finish with an increase of 98 swimming points from last year. The Lady Vols are led by their Irish duo of sophomore Mona McSharry and freshman Ellen Walshe. McSharry currently holds the top time in the nation in the 100 breast and the 7th fastest time in the 200 breast, while Walshe holds the 4th fastest 200 IM, 2nd fastest 100 fly and 7th fastest 200 fly.

Updated to reflect only 2021 swimming points. 2022 projections based on scoring current national rankings.

The big surprise here is the Texas A&M Aggies, who currently project to score just a single swimming point after a 107.5 point (79.5 swimming point), 14th place showing at last year’s meet. The Aggies were hit hard by graduation, with 2021 individual scorers Charlye Campbell, Taylor Pike, Jing Quah and Camryn Toney and their combined 63.5 points moving on from the program at the end of last year. Sophomore Chloe Stepanek, who scored 26 points last year, is the Aggie’s only projected scorer, holding the 16th fastest time in the nation in the 200 free.

The Virginia Cavaliers also check in with a larger-than-expected number, but don’t read too much into it. The Cavaliers elected not to swim the 800 free relay at the Tennessee Invite, a relay they won at last year’s NCAAs and are missing those projected points in the rankings, while freshman superstar Gretchen Walsh is probably also slightly undervalued after she missed their midseason invite.

Why is VT only projected to score 3 points? Last time I checked, Atkinson scored a large sum of points last season at NCAAs, along with Gyorgy scoring and some really solid relays. I’m expecting them to score more for sure.

These projections are based on scoring a hypothetical meet using current season best times.

Ekaterina Nikonova is on campus now at Florida. If she is eligible by SECs, Their relays just got a turbo boost.

However, Florida has lost Vanessa Pearl and Cecilia Porter who are both no longer swimming on the team and contributed many points at last years SEC championship.

Not sure why Minnesota was put into the faller category as in 2021 all of their points were from diving. No swimmers scored. Now 21 points are projected from swimmers. Looks like a modest riser in my opinion plus they should score points in diving.

You make a good point. I’ve gone back through and updated those tables to reflect swimming only points.

Any word on why Gretchen Walsh missed the mid season? I really hope she’s there for NCAA’s and Trials this year!

SS can you please get the scoop on this?