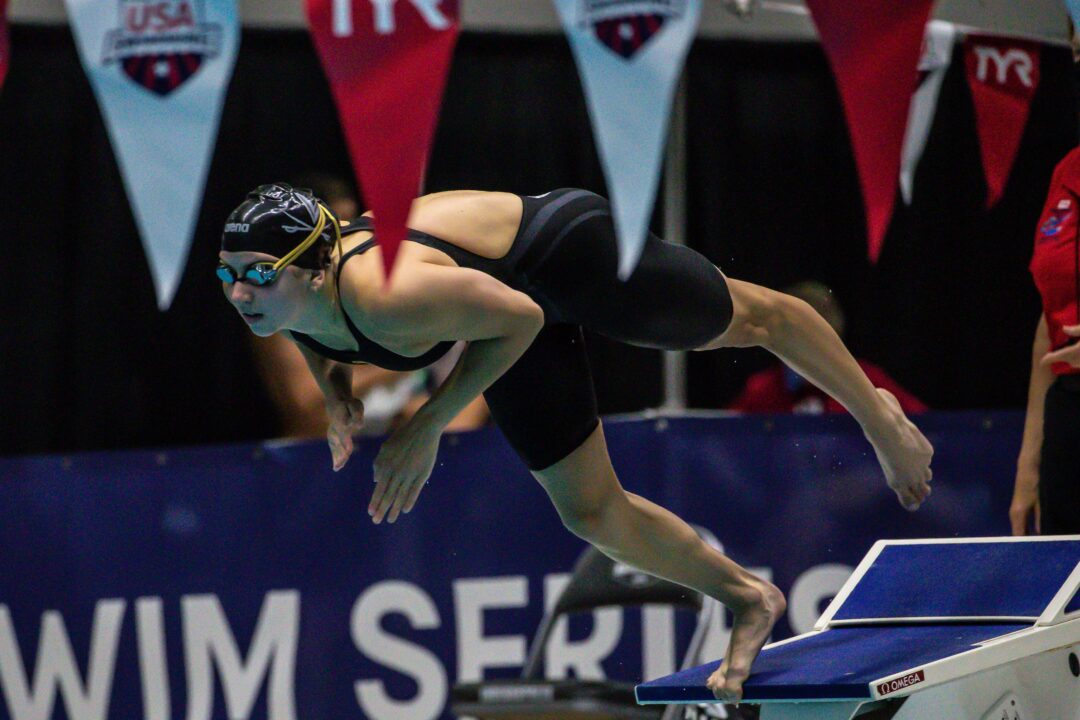 Last week we released a hypothetical midseason NCAA invite list, with Tennessee and Cal leading the way with 17 projected individual qualifiers. Today, we score out those invite lists to get a look at how those programs stack up at a hypothetical NCAA meet. Despite having the third largest team, it is the defending champion Virginia Cavaliers who sit atop the projected standings.

Last year, Virginia won the program’s first-ever national championship in dominant fashion, scoring 491 points, 137 points clear of their ACC rival and NCAA-runner up NC State. Virginia was led by now-graduated Paige Madden, who won all three of her individual races and swam on the Cavaliers’ NCAA Champion 800 free relay and runner-up 400 free relay. The third place trophy went to the Texas Longhorns, who scored 344.5 points, while the fourth place trophy went to Cal with 290.

If this year’s midseason points projections are any indication of how NCAA’s will pan out, the Cavaliers will be challenged more for the title than last season. UVA tops the rankings with 395 points, but three other programs also project above 300 points, with Alabama, Stanford and NC State close on the Cavaliers’ heels.

The big surprise is the Alabama Crimson Tide sitting with the second-most projected NCAA points with 333 points. One of the big storylines of the NCAA offseason was how Margo Geer would fare in her first season as head coach at Alabama after being hired with limited coaching experience. Thus far, Geer and her staff, which includes US Short Course Worlds assistant coach Ozzie Quevedo, seem to be quieting the critics.

Note: score projections include swimming only and do not account for potential diving points.

For more detailed analysis, check out the SwimSwam Swimulator.

I really get the feeling Emma Nordin is going to crush it this season. She will win the 200/500/1650, and will make the Worlds Team come April in the 4×200 Free-Relay. Maybe the 400 too, (I think Bella Sims will probably be there), but still Nordin is magical. Her trials were a bit of a fluke, and once she has more experience tapering, she will be a monster at the international level.

UVA doesn’t have a 800 free relay in the database, and Gretchen Walsh missing the mid season invite definitely impacts their relay times/places, and to a lesser extent her own scoring. I’d estimate all of that at about 50 points conservatively.

Looking at the stimulator results, I didn’t see any other top 5 team missing a relay or one of their primary swimmers at their mdseason invite, unless I missed something?

What’s wring with missing an invite?

I think he makes a fair point that no doubt Gretchen Walsh will score significantly above these sheets imply & that UVa will have a A final 4×200 free relay at NCAAs this year. Both seem like valid points & this psyche sheet papers up light for the Hoos…they could easily be in the 420-450 point range at NCAAs in March. Like the Texas men this year, UVa women are just too deep & each are a meet for second.

The swapped out Paige Madden and got Gretchen Walsh and Emma Wyant so they had 491 last year and this year they should beat that.

except this is a zero sum game

On paper the additions of Weyant and GWalsh are a net positive over the loss of Paige Madden and other graduates. With everyone else returning and relays stronger than ever (mostly because of GWalsh), you’d think 500 points is easily within reach. But yeah, the competition will be significantly stronger than last year. I’ll guess they’ll be in 460-480 point area, barring injury or illness, and that will be comfortably ahead of 2nd place.

Anyone happen to know where USC stands as far as a head coach?

I’m sure Lea will finish the season as interim coach. After that may depend on how long Kipp’s initial contract was.

OH no! Is the NC State “4th” curse starting for the women?

from top 5 , TX has divers to go up but don’t think anyone can touch UVA

I think diving could get it close for Texas. Looking at USADiving winter nationals, last years NCAAs, and a few of the invitationals, one can assume that Virginia, Alabama, and NC State will get no or very minimal points.

Stanford has Lenz and added Sculti this year, both who may get 20-40 points combined.

Texas has Pineda who scored 42, with a final finishes on all 3 boards and has looked good this year and O’Neil who should be good for a or b finals on both springboards. They added Hailey Hernandez who is an Olympian and should certainly a final on both springboards. Skilken or Boyle should final in tower. I could see 45 for Pineda, 30 for… Read more »

They weren’t going to score any points from Women’s diving with the exception of a small amount from Tanesha Lucoe on platform. I don’t think that change really impacts anything

She is abiding by the NCAA guidelines!

Right now her projected points has Penn in 18th…. I highly doubt that she is the first person in NCAA history to be a school’s solo rep & crack the top 20.

Further, plenty of times in swimming history an unsuspecting talent will blossom at a school outside of the top 10… a few that come to mind are Brooks Curry LSU & Shane Ryan PSU

Four other women are scoring the same or more than her: Kate Douglass, Regan Smith, Torri Huske, Maggie MacNeil. This article is also about the team standings, which Penn is nowhere near the top 10. But you decided to ignore all the other women and just focus on her.

As well as (beyond) hurtful for the LGBTQ swimming community

Lack of fairness is (beyond) hurtful to anyone participating from every part of the swimming community. Unfortunately, the rules can’t be looked at without singling out and discussing the case they impact so shutting people down from making observations isn’t going to help us address this and heal the clear divides.

Those four other women listed by ACC are all medal winning Olympians – that is the company Lia is keeping these days when discussing her times and impact. Considering that in her previous years, competing with men, she did not have an invite time means there is no ignoring that her comparison now is with the best ever in the world.

If you have any problems with Lia swimming, talk to the NCAA. Don’t bring her into it because she is a human bean just like you and me. Grow up

Jimbob literally out here making a statement, no bias from what I can see, and he gets trashed for it. Nuts world we live in.

These people don’t understand that by complaining about the rule you have state the obvious reason the rule is unfair. Hence LIa Thomas is going to be mentioned every time the unfairness of the current rule is discussed. Thats just the way it is. To those complaining do you want us to invent a code word for her like they did for Biden?

How about stop bringing up her name in an article that has nothing to do with her. My god she lives rent free inside of you guys’s heads lmao.