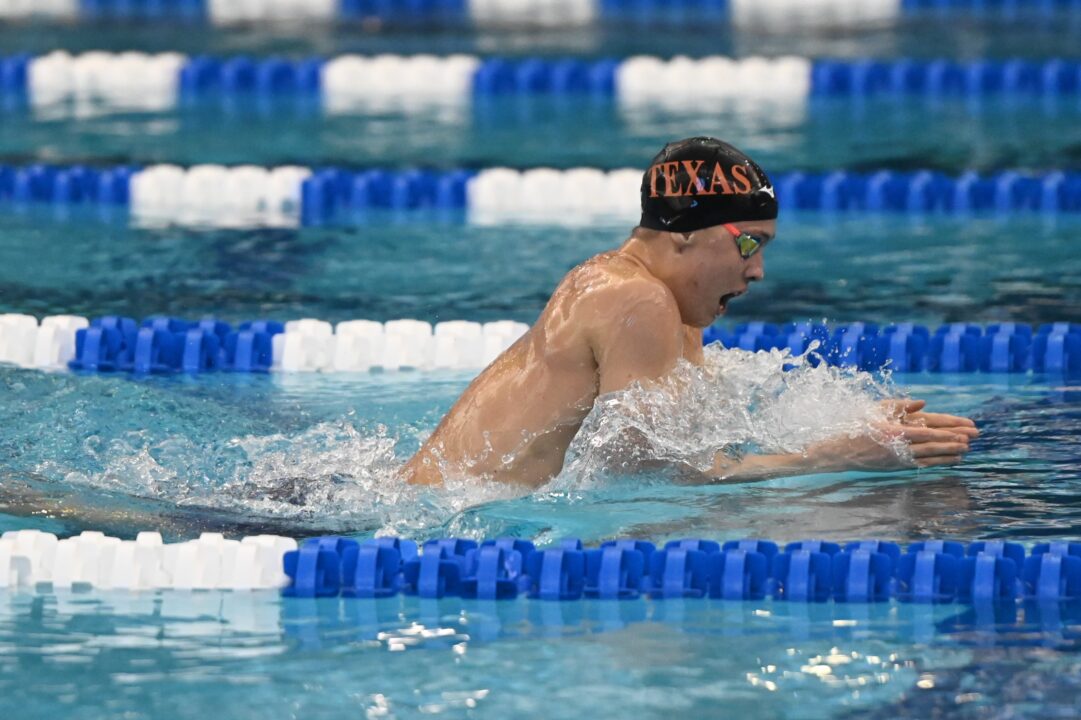 Carson Foster is one of five Longhorns who hold the top time in the country at the midway point of the 2021-22 NCAA season. Current photo via Jack Spitser/Spitser Photography

Last week we released a hypothetical midseason NCAA invite list, with the defending champion Texas Longhorns leading the way with 22 individual qualifiers, four more than NCAA rules allow. Today, we score out those invite lists to get a look at how those programs stack up at a hypothetical NCAA meet.

Unsurprisingly, the Texas men also lead these rankings with a commanding 208 point lead over runner up Arizona State. The Longhorns have both a significant amount of star power, as well as impressive depth, contributing to their massive midseason lead. They hold the top time in the country in five individual events, from an impressive five different swimmers : 50 free (Cam Auchinachie– 18.80), 100 free (Daniel Kruger– 41.45), 500 free (Luke Hobson– 4:09.72), 100 breast (Caspar Corbeau– 50.79) and 400 IM (Carson Foster– 3:35.61). Texas also owns the nation’s top time in all five relays.

After the entire program redshirted the 2020-21 season, the Arizona State men announced their return in a big way at the NC State Invitational in Greensboro in November, and currently sit in second in projected points with 331, just ahead of last year’s runner-up, Cal. The Sun Devil free relays were especially impressive, as they sit behind only Texas in the 400 and 800 free relay, and sit in third behind Texas and Cal in the 200 free relay. The Sun Devils also got a huge boost from the arrival of superstar freshman and Olympic finalist Leon Marchand from France.

Note: score projections include swimming only and do not account for potential diving points.

For a more detailed breakdown, visit the SwimSwam Swimulator.

aint no way Tennessee is 25th.

I haven’t scoured the psych sheet projections enough to tell – but are all 22 of Texas’ qualified swimmers included in these points or did you limit it to the highest scoring 18? Any reduction from their bottom four will likely be way surpassed by the addition of diving points – just curious on process.

Swimulator only shows 15 swimmers for Texas

Will be very interesting seeing how high up the totem pole the manVOL foreign legion can climb. Currently chowing 6 foreigners, two international divers likely to go and 2 or 3 international mid-year foreigners for an anticipated 11 foreigners likely going to zero Americans as go now. Come on TENN surely you can recruit a few Americans or train an American to go to NCAAs?

I think this guy has an issue with foreigners.

All of a sudden the never-ending issue of “diving points” seems a lot less significant.
UT Longhorns for the win!

Even if it was just a swim meet, I think Texas would have the edge over Cal this year.

So if we were to look at combined men’s and women’s teams psych sheet scoring positions, it looks like the top 3 schools would be:

Correction, the top 4 combined positions are:

If USC was referred to as Southern Cali in everything, forever….

Stewie’s conservative, “30 seconds on the back of the napkin” scoring has Texas at roughly 510 points (10 swimmers scoring an average of 30 points each, 160 points from relays, and 50 from diving). Will it be enough? Stay tuned.

a less useful analysis than the napkin it’s written on

Dean Farris will be ready