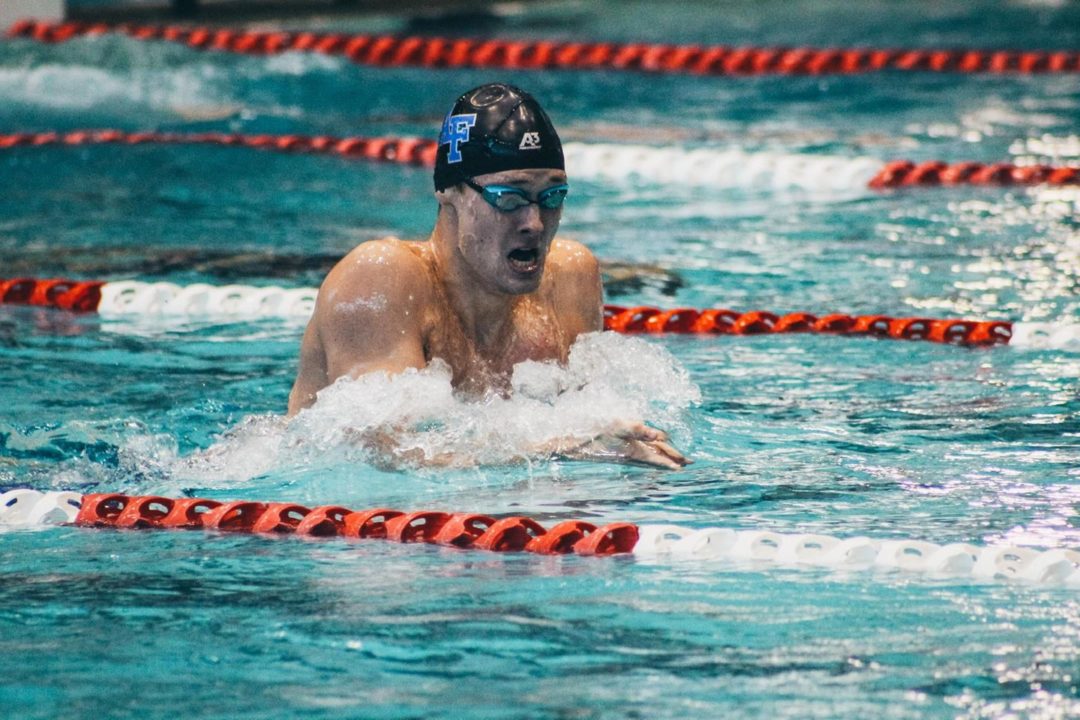 In a Friday tri-meet, the Air Force men beat both of their opponents, Colorado Mesa and the Colorado School of Mines. The women finished with a tie and a win. Stock photo via Air Force Athletics

Senior teammate Andrew Limpert raced to a pair of top finishes, winning the 50 freestyle with a 20.64. He also helped the 200 medley relay team to a first-place finish alongside Gabe Bartolomei, Tory Bartlett and Corey Shepard. Shepard also finished second behind Limpert in the 50 freestyle (20.99), and third in the 100 butterfly (51.01). Bartolomei also clocked a third-place finish in the 100 backstroke (51.99).

Next up, Air Force travels to Provo, Utah, to take on Brigham Young in dual-meet action, Friday and Saturday (Jan. 14-15). Action is slated for 5 p.m. MT and 11 a.m., respectively, in Richards Building Pool.

Freshman Abby Turner had an impressive day in the pool, winning first in the 50 freestyle (24.11) and helping the 200 free relay team to a first-place finish (1:40.46). Other members of the team were Brooke Costella, Raquelle Roesch and Lia Campbell. Turner also posted a third-place finish in the 100 freestyle (53.34), just behind teammate Kara Gavin who finished second (53.27).

Freshman standout Corbyn Cormack notched a first-place finish in the 100 butterfly with a 57.51. Teammates Shayla Markle (58.44) and Ella Martin (58.50), finished second and third, respectively. Cormack rounded out her day with a third-place finish in the 100 breaststroke (1:07.28), finishing behind second-place teammate Kimmy Woolfenden (1:05.94).

Sophomore Jessica Lloyd took first in the 1000 freestyle, clocking an 11:03.21 to beat second place by more than five seconds.

“It was a hard fought meet tonight and our women stepped up to the challenge,” head coach Colleen Murphy said. “After a stressful few weeks and returning to the pool on Monday, I am super proud of how we performed after only five days back in the pool at USAFA.  Hats off to Mesa on an exciting meet and an unusual tie, it was great to have the opportunity to race again.”

Next up, the squad travels to Provo, Utah, to take on Brigham Young in dual-meet action, Friday and Saturday (Jan. 14-15). Action is slated for 5 p.m. MT and 11 a.m., respectively, in Richards Building Pool.

USAFA, Colo.—  A dominating 1,000-yard freestyle win by freshman Jacob Troescher, who later came back to take second in the 500 free, and a 100 back 1-2 finish by fellow freshman Andrew Scoggin and Jeremy Koch led the Colorado Mesa University men’s swimming and diving team to a dual-meet split on Friday evening here at the United States Air Force Academy’s Cadet Natatorium.

The CMU men, without the services of a few of their top swimmers, were able to extend their now 6-year Rocky Mountain Athletic Conference dual-meet winning streak to 12 with a 149-87 win over the Colorado School of Mines but were not able to duplicate their October, 2021 home win over the NCAA Division I Falcons, who claimed a 136-104 victory in their Senior Night meet.  The Falcons also defeated the Orediggers, 146-82 in the other leg of the tri-meet, the first of 2022 for each squad.

The Mavericks, ranked fourth in the latest CSCAA Division II Top 25 Coaches’ Poll, are now 8-3 overall and 4-0 in RMAC duals this season with three wins over the nation’s 16th-ranked Orediggers.  Their eight overall wins are equal to their program record.

In the 100 back, Scoggin finished in 51.31 seconds while Koch touched in 51.95 seconds for one of the Mavs’ eight total second place finishes throughout the night.

Two of those came on the diving boards as Belliston took second on the 1-meter with a 6-dive score of 291.23 points before finishing third on the 3-meter with a career-best score of 305.10 points.  Both marks surpassed the NCAA Division II qualifying standards of 285 and 295 points.

Luna, competing for the first time this season, finished second on the 3-meter with a career-best 310.13 points to join Belliston as a national qualifier.

The Mavs also finished second in both relays to book-end the night. The 200 medley relay team of Lane Austin, Matt Barret, Treven Wertz and Felipe D’Orsi finished in 1:33.35 while the 200 free squad  of Austin, D’Orsi, Scoggin and Kuba Kiszczak touched in 1:25.29 in a tight finish with both the Orediggers (1:25.23) and Falcons (1:25.78).  All three teams were within 55 hundredths of a second of each other.

Jake Simmons led CMU in the 400 IM, finishing second in 4:21.09 while Troescher, who competed in all three of the longest swimming events, placed sixth in 4:27.42.

The Mavericks will next compete on Jan. 21 in a tri-meet at BYU in Provo, Utah.  The University of Denver Pioneers will also compete.

USAFA, Colo.— For the second straight outing, the Colorado Mesa University Maverick women’s swimming and diving team came from behind to forge a tie with a NCAA Division I opponent.

The Mavericks, ranked fourth in Division II, won each of the four final swimming events and went 1-2-3 in the 1-meter diving competition to post a 121-121 tie with the host United States Air Force Academy on Friday evening here at the Cadet Natatorium.

The Mavericks, who had eight overall event wins in the 13-event format, also drubbed Rocky Mountain Athletic Conference and 24th-ranked rival Colorado School of Mines, 188-51, in the other leg of the tri-meet, extending their RMAC dual meet winning streak to 32 while guaranteeing their sixth consecutive season undefeated against Division II foes.

The Mavericks, who tied 8-time defending Western Athletic Conference Champion Northern Arizona over four days of competition at the A3 Performance Invitational in November are now 11-6-1 in duals this season.  They will finish the year 7-0 in RMAC duals and 9-0 against Division II foes this season.

Borgenheimer set an improved NCAA Division II Championship provisional qualifying time of 4:35.63 (4:25.63-altitude adjusted) to win the 400-yard individual medley by a huge 14.2-second margin.  She was also strong in the 100 breaststroke, taking that event by more than a second in 1:04.79.

White and Borgenheimer also swam on the first two legs of CMU’s second place 200 medley relay team, that started the night with a time of 1:47.14.

Day then finished third in the 50 free, touching in 24.85 seconds before Borgenheimer won the 400 IM before the first intermission.

The Mavs will continue their season in two weeks competing in a Jan. 21 tri-meet at BYU and against the University of Denver Pioneers in Provo, Utah.

GOLDEN, Colo. – Braden Whitmarsh won the 200-free and Charles Burroughs was fastest in the 200-breaststroke to lead Colorado School of Mines in a men’s swimming dual against Air Force on Saturday.

Whitmarsh won the 200-free in a 1:44.99 time to lead a Mines top-four sweep of the event as Ronan Lauinger and Joe Peak tied for second and Nick Delaney was fourth (1:48.09); Lauinger and Peak provided the race of the day as they swam the second heat by themselves and pushed each other to a 1:46.46 simultaneous touch at the wall.

Mines’ 400-medley relay of Jarod Schahrer, Gavin Gilmore, Burroughs, and Waite nearly pulled off a comeback victory to open the meet as Burroughs and Waite closed fast to take second in 3:31.41, just four-hundreths off Air Force’s pace. In the 400-free relay, Mines’ crew of Kietzman, Braden Hunt, Waite, and Smith swam 3:10.80 for second.

NEXT UP
Mines returns to action next Friday at Wyoming, then hosts Adams State Saturday for Senior Day.

COLORADO SPRINGS – A win by the men’s 200-free relay highlighted Friday night’s tri-meet as Colorado School of Mines got back to second semester action at Air Force with Colorado Mesa also in the pool.

NEXT UP
The Mines and Air Force men will swim in Golden Saturday morning at 11 a.m. The women are back in action along with the men next Friday at Wyoming.