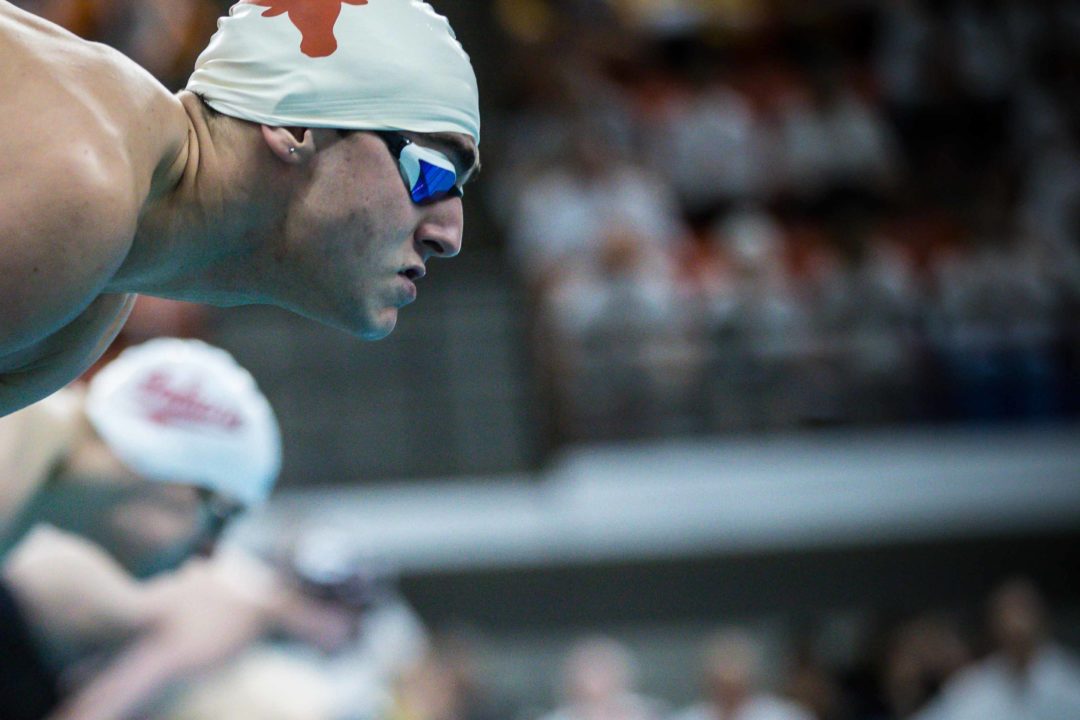 With 17 men currently projected to score, the downside to the Longhorns' incredible depth is that they may end up leaving potential scorers at home. Current photo via Jack Spitser/Spitser Photography

Texas head coach Eddie Reese has one of those problems that pretty much every other coach in the NCAA would probably love to have. With the release of the NCAA pre-selection psych sheets, the Longhorns project to have an unprecedented 26 men qualify for the NCAA Championships later this month.

That’s a slight increase from last year, when Texas had 24 likely qualifiers, but didn’t even officially enter everyone, instead paring down the options even before the pre-selection psych sheets were released.

This year, the Texas coaching staff opted to go in a different direction, and ended up with 26 men under the cut line, plus another, Andrew Couchon, who currently ranks 11th on the alternative list.

Team rosters are capped at 18, with divers counting as 1/2. Texas generally brings at least 3, if not 4, scoring divers, so chances are that the Longhorns will only bring 16 swimmers. However, one interesting wrinkle this year is that alternates will be only called up to the meet within the first 24 hours. That seems to mean that if Texas only drops 8 men now, and waits to confirm its diving roster before dropping any other swimmers, a couple of possible alternates from other teams may miss out on their chance to swim.

Here’s a quick glance at how those 26 Longhorns rank by seed.

On paper, the most logical cuts probably are the guys who are not seeded in the top 16 in any event, and there are nine guys in that category, which would put the Texas roster at 17. However, there’s at least a couple of wrinkles. Charlie Scheinfeld was Texas’ top breaststroker two years ago as a freshman, and his lifetime bests of 51.41/1:52.78 would easily score if he can match them this year. Additionally, Texas only has one other relay-ace breaststroker on the roster, Caspar Corbeau, and you have to wonder if Scheinfeld makes the roster partially as insurance against anything happening to Corbeau.

Another interesting case is Luke Bowman, who’s capable of going sub-42 on a free relay and earned an invite in the 100 free, in which he’s officially the 4th-fastest Longhorn this season. If Texas had a little more roster room, and if this was a normal year in which there were prelims relays, he might be earn a spot to help lighten the load on some of the Longhorns’ top swimmers, but his inclusion would definitely mean bumping out guys who are seeded to score, which seems tough to justify.

If Texas does end up with 16 swimmers, at least one Longhorn who is currently seeded in the top 16 will find himself in the very strange position of not making the NCAA roster. Ethan Harder and Cole Crane are seeded 15th and 16th in the 200 fly, respectively, but not projected to sore in any other event.

A few other notes about Texas event choices:

Heasley, Harter & Crane out. JT Larson, Carrozza and Scheinfeld in.

Kind of incredible that Texas had this many men qualify, and they still have no trouble pulling top recruits even if they wouldn’t be able to go to an NCAAs with an invite. Reflects well on Eddie Reese, something to be said about swimmers’ admiration for him. Calm, collected, and encouraging. Screaming at your swimmers is on the way out.

200 Corkscrew swim off in practice for the final spots. Who wants it more folks?🤨👏

Coby is a man who doesn’t disappoint under pressure. We’ve seen it over and over again.

Gonna be some sadness is Austin again. With such a nominal conference champs it seems like a letdown for a lot of people who put in a lot of time working hard.

So should Texas bring 2 divers or 3-4? Windle and Duperre are no brainers with multiple A finals likely. But does Harness have more scoring potential than 2 of the potentially cut swimmers? I think probably so.

Yeah, I actually change my mind too. Bring four divers.

Texas divers haven’t had their NCAA zone qualifier meet yet. There’s no guarantee all four divers will make it through on all three boards. So there is no way to do any sort of real analysis on the question yet.

I believe the limit is 18. With divers counting as 1/2, 3 divers would mean you could only bring 16 swimmers (17.5), so typically you want to bring an even number of divers.

Brutal for those not making it, though congrats for such fast times to be invited! I do not envy Texas coaching staff on this… For the sake of conversation, and helped by Swimswam’s list in this article, my take (just an initial pass over the names…ugh…):

What do others think? Who would be swapped out from one list to the other?

Regardless of outcome, way to go to all the swimmers on this list….fine job to qualify!

Interesting you have Carrozza in ahead of a few seeded higher. What’s the thinking? He is close to scoring in multiple events

I’m pretty sure that list is in alphabetical order

Carrozza got his NCAA cut mid season, probably has more potential to drop time at NCAAs than some of those tapered for conference championships like Koustik, Harder Crane etc. He also is likely to be on the 800Fr Relay

I wonder what they’ll do about Gene Creemer, he could score in several events