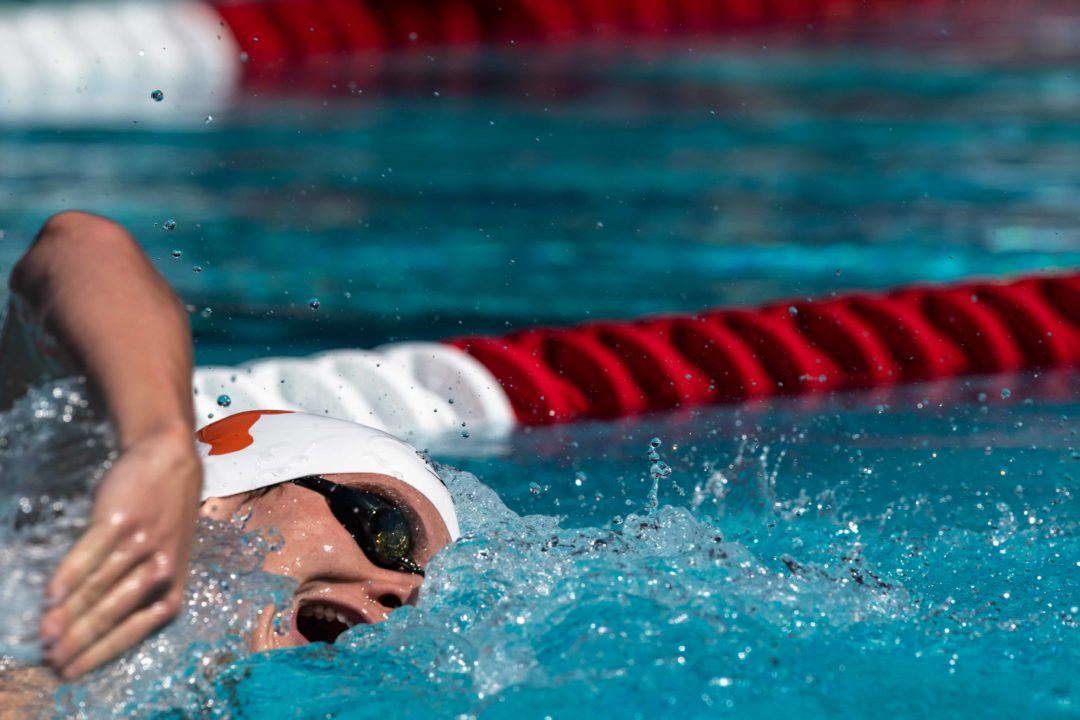 Two-time NCAA qualifier Chris Yeager is one of six Texas swimmers who likely would have made the NCAA invite line, but who are not entered in the meet, likely due to roster limits.

Though each team can enter as many swimmers as it wants on the pre-selection psych sheets that dropped this morning, each team can only bring 18 athletes to the NCAA Championships, with divers counting for half a roster spot each. In our early projections, we had 24 Texas swimmers potentially in line for NCAA invites, and with the team likely to bring four or more divers, many of those swimmers were in jeopardy of being cut.

Texas only entered 18 swimmers on the pre-selection sheets, appearing to narrow down their roster early, with two or more cuts still likely to come with 3 Texas divers already qualified with two days of Zone competition yet to go.

Here are the Texas swimmers entered on the psych sheets:

On the bubble: Texas will definitely bring its top two divers, who both made multiple NCAA A finals last season. It’s very likely they’ll bring two more, who each have decent chances to finish top 8 and strong chances to score. That puts Park, Johnthomas Larson and Scheinfeld on the hot seat, as all three are seeded outside of scoring range. Scheinfeld is the lowest seed, but also has the best chance to be valuable on relays, so it might be Park and Larson in trouble.

Here are the swimmers we projected in scoring range who are not entered, along with where their season-bests would have ranked on the pre-selection sheets. The top 29 in each event qualified for the meet, with two 30th-ranked swimmers also qualifying:

So how do all these swimmers afford it? i.e. academic scholarships instead of athletic? Do the in-state recruits attend for close to free?

Afford college? Not sure I understand your question, but family savings, grants of all types, academic scholarships, student loans, athletic scholarships (fulll, partial). If you are a Texas resident, a tremendous in-state savings over out-of-state, but certainly not close to free. What is a growing challenge is the growth of Austin and cost of living (though Texas has no income tax). NO shortage of Californian’s moving here from the left coast I trust you’ve heard…

I had an honor of spending an hour and 40 minutes with Eddie last week during our son’s recruiting visit. I made sure I asked him all questions I ever wanted to ask him. What a crash course on life and swimming! I now understand why these people that will be left home, no matter how sad for them, never leave Texas. You are a part of something much bigger than NCAAs.

And to be honest, some of the kids left home may never have been as fast as they currently are by choosing to attend a different school.

In a culture where so many kids earn “participation trophies” in sports growing up, I trust swimmers choosing to swim for The University of Texas Longhorns accept both the honor and challenge of just being on the team with a CHANCE of being good enough to be a national qualifier. THEN they have to trust their coaches to select those qualified who have the best chance of scoring the most to help the team win. Indeed a microcasm of what makes USSwimming a world leader in this sport as reflected every 4 years at the Olympics.

Participation trophy? And you equate that to being left at home? Okay then. Lol

I am someone who was left home after qualifying to swim at NCAA’s for Texas. This was many, many moons ago. It was my freshman year, and Eddie had to decide between me and a sophomore who had been left home the previous year. We had both qualified in one event, and I knew my odds of scoring were pretty slim. I felt bad Eddie had to decide who went and who stayed, so I privately told Eddie I was willing to give up my spot. He asked if I would tell the team after practice, and I said I would. All of the guys were great about it. It had a bit of a “bonding” effect on us all,… Read more »

Texasd, thank you for that. You’re a lucky guy. I would imagine that experience made the next three years even more special. Not cheesy at all! I’d be proud as hell if I were you! Hook ‘em!

A Texas tradition since the early 80’s. Everyone knows this going in. Like being the reserve driver for Mercedes F1.

I don’t think Yeager has been in a meet since Minn. invite back in yearly December.

Having to leave a possible 8 swimmers at home is incredible

Incredibly sad for those guys.

That’s the deal when you go to Texas. Similar to a lot of swimmers that choose the school where they may miss the conference scoring roster vs a different team where they’d be a bigger piece of the success.

And an incredibly happy moment for the potential 4 Longhorn divers in the ‘other pool’ (of the 5 who qualified for NCAA’s) that their participation at NCAA’s might just be the determining factor this year! As a swimmer, I would happily give up my NCAA swims to another swimmer or diver if I knew I was helping the team take #15 in 2020!

What an incredible problem to have? Please add a little MORE stress to the coaches lives. Wow.