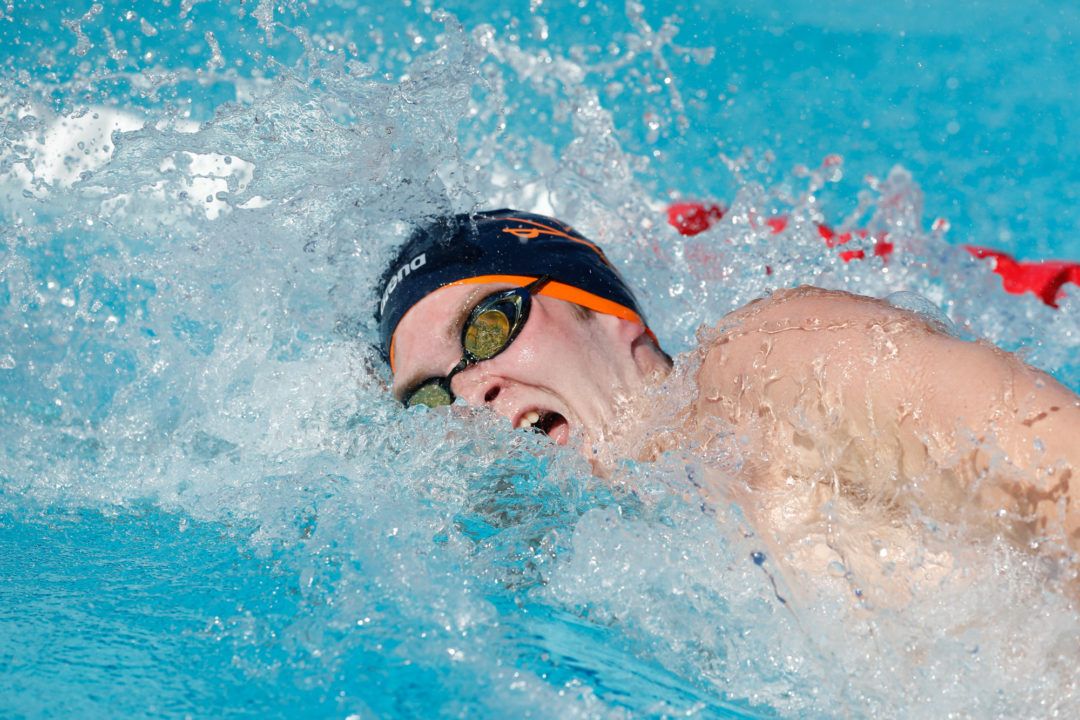 Harvard's four qualifiers no longer appear on NCAA psych sheets, and four alternates have been added in their place - two of them from Stanford. Archive photo via Tim Binning/TheSwimPictures.com

Texas leads with 18 swimming qualifiers to Cal’s 14 in our early projections of the NCAA cutline based on this morning’s psych sheets.

The Ivy League canceled all spring sports, part of a wave of cancellations as the 2019 novel coronavirus and its associated COVID-19 illness has spread across the globe. The Ivy League didn’t blanket-ban winter sports still competing, but left those decisions up to individual schools. Harvard – which led all Ivy League schools with four men’s swimmers invited to NCAAs – announced that it would cancel all winter postseason play.

True to that statement, Harvard’s four male swimmers no longer appear on NCAA psych sheets, and three more alternates have been called up in their places. Here are the scratches and additions, along with their seeds in each event:

Texas is still listed with 18 qualifiers, but based on coach Eddie Reese‘s comments, they’re expected to cut two swimmers to take four of their five qualified divers. That means two more from the updated alternates list should still be in line to get late invites.

I think the meet will happen. Who will actually sit up in the stands appears to be up in the air…

I want it to happen, but with Duke and Kansas pulling out of basketball, that will be cancelled, and when that’s cancelled, everything is cancelled.

Swimmers are tougher than basketball players – we train and compete in chlorine/bromine environments…;-)

Again, if it doesn’t happen – I will be on point for organizing a CAL TEX Championship Format Dual Meet at a site to be determined. My only pre-requisite is all qualified swimmers and divers compete for their teams with no roster limit as long as they have NCAA cuts.

OK so we go to a neutral site pool willing to host – even outdoors if necessary as spring has arrived in Texas and no self-respecting COVID-19 wants to MESS WITH TEXAS heat!!!

Someone else suggested that if meet gets cancelled that Cal & Texas hold a dual meet. Maybe also invite Florida & A&M so Kieren & Casas can swim

The meet in all likelihood will not happen.

Duke just suspended all competition, so at least one more alternate added right?

Bummer. Was really looking forward to him winning the 100 freestyle.

I don’t think Eddie will cut swimmers until the moment he must do the cut and/or until he knows the meet will happen for sure. If it gets canceled before the cut, then nobody’s feelings will be hurt.

With all the recent closures of sporting events. I don’t see this meet happening unfortunately.