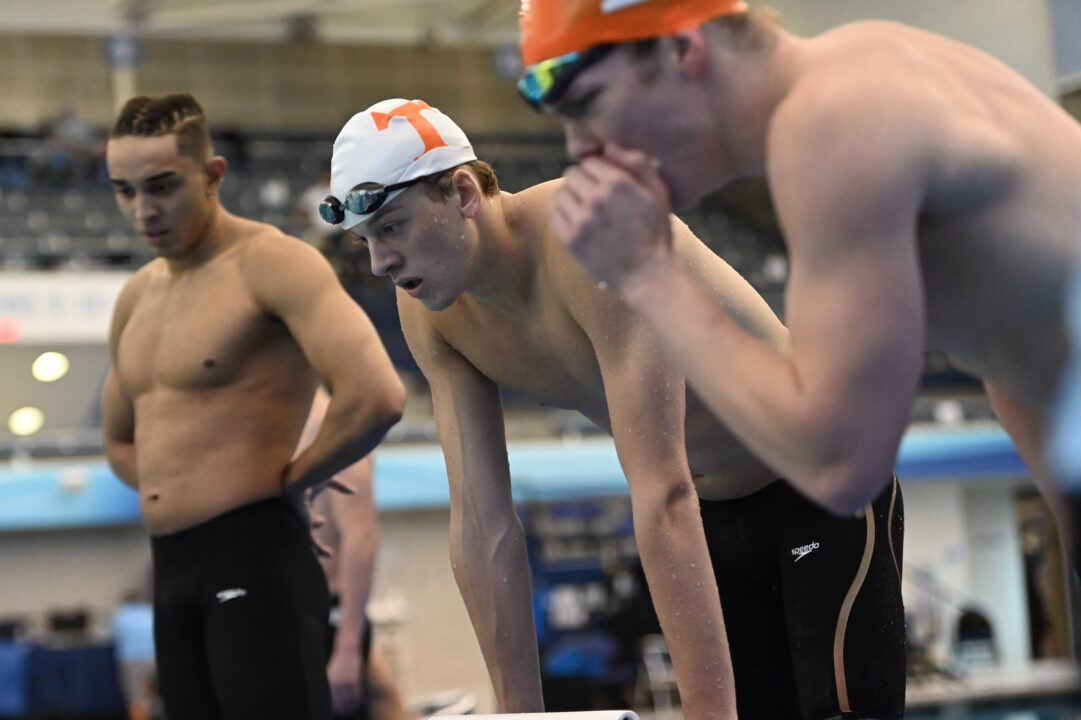 The #6 Lady Vols and #15 Vols kicked off the new year with victories over Duke and Queens University (Division II) in a double dual at Queens. Stock photo via NCAA Photos

Duke vs Queens vs University of Tennessee

The #6 Lady Vols and #15 Vols captured commanding victories in their double dual meet against Duke and Queens University (Division II). On the women’s side, Tennessee beat Duke 167-94 and Queens 211-48. On the men’s side, UT defeated Duke 175-87 and Queens 144-115, which was the closest scoring dual for the Vols.

The Lady Vols’ performances were led by freshman Josephine Fuller and junior Anna-Julia Kutsch. Both Fuller and Kutsch helped UT open up with a win in the 200 medley relay (1:39.46) through their backstroke (25.50) and freestyle (22.27) splits. Kutsch had the fastest freestyle split in the field, and nearly matched her time in the individual 50 (22.64). Kutsch swept the individual freestyle events and split 22.26 on Tennessee’s 1st place 200 free relay.

The Vols swept several events on Saturday, but Duke and Queens were able to earn some victories. One of these events was the 200 fly, where Duke was able to secure a 1-2 finish with the help of Cabell Whitlow (2:00.53) and Catherine Purnell (2:00.74).

On the men’s side, it was Queens that had the early momentum as they out-touched Tennessee’s 200 medley relay, 1:27.85 to 1:27.94. Queens was able to secure the win with the help of an 19.48 freestyle split from Skyler Cook-Weeks.

Queens also won the final event of the meet, which happened to be another relay. Queens’ “A” relay of Skyler Cook-Weeks, Matej Dusa, Alex Kunert, and Kimani Gregory (1:19.47) defeated Tennessee’s “A” relay of Jordan Crooks, Aleksey Tarasenko, Micah Chambers, and Scott Scanlon (1:19.93).

Cole Reznick was able to secure another victory for the Blue Devils in the 200 IM (1:50.84), though Queen’s Balázs Berecz split 25.48 on the freestyle leg and almost ran him down.