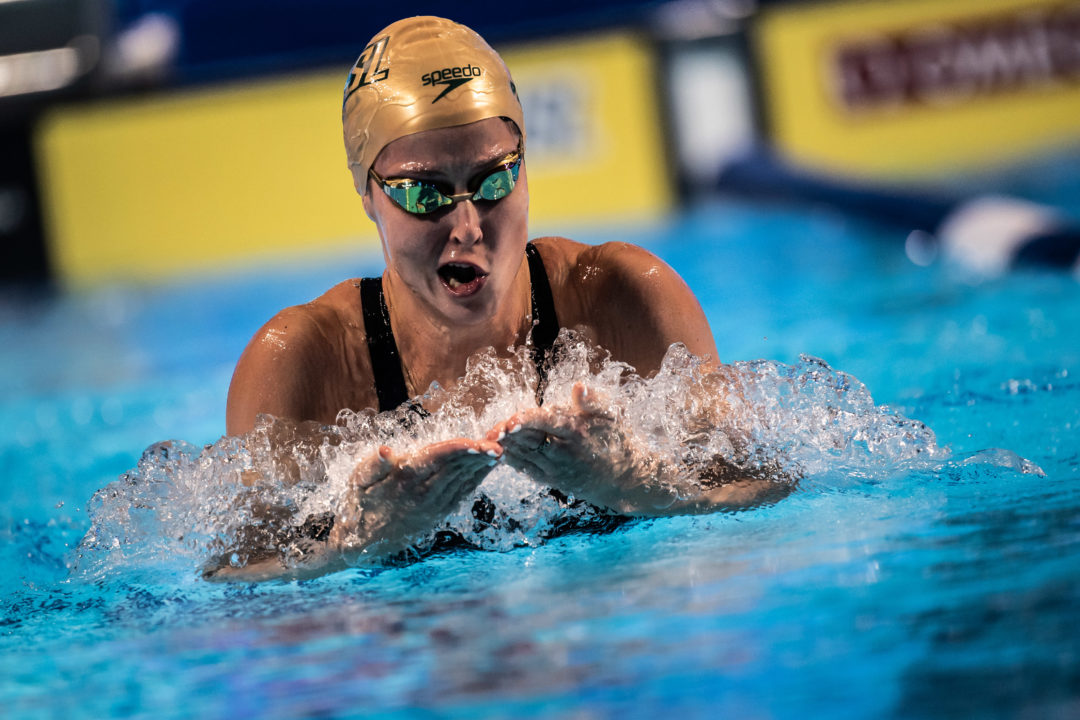 Canadian swimmer Sydney Pickrem, who finished 4th at the 2019 World Championships in the 400 IM, has dropped the race for "medical reasons not related to COVID-19". Archive photo via Mike Lewis/Ola Vista Photography

Canadian swimmer Sydney Pickrem was a late scratch in the women’s 400 meter IM on Saturday, dropping the race as the #6 seed.

The Canadian Olympic Committee announced Pickrem’s scratch saying it was “due to medical reasons not related to COVID-19.”

The statement continued: “We have made this decision in consultation with Sydney, our national team medical staff and her coach Ben Titley at the High Performance Centre – Ontario to protect her performances for the rest of the Olympic Games. With a very busy program that also consists of two other individual events which would have heats, semifinals and finals, and may also include relays, this decision is in the best interest of the athlete at this time. Our focus turns to supporting Sydney in her preparation for the 200m individual medley in two days’ time.”

No more specifics were available, though Pickrem was spotted doing a “wakeup” swim before prelims on Saturday morning before returning to the athletes’ village.

She finished 4th in the race at the 2019 World Championships, though it was a wide gap – 4:36.7 to 4:32.3 – to a medal. With a relatively-slow prelims session overall, however, that gap might have closed, especially with the World Champion Katinka Hosszu qualifying to the final just 7th.

Canada has two other 400 IMers on the roster – Mary-Sophie Harvey and Bailey Andison. Teams were allowed to swap in athletes already on their rosters at the Team Leaders meeting earlier this week, but Canada chose not to do so.

The other 400IMers mentioned do not have the fina a standard, so they could not have been swapped in alongside Cieplucha.

The last sentence of the article addresses that.

Well not really, it implies Canada had a choice when in fact they did not. This scratch did not effect any other Canadian swimmer losing out a swim.

I guess that’s smarter than starting the race and not finishing it.

For all you real heads out there: https://swimswam.com/sydney-pickrem-exits-pool-fly-leg-womens-200-im-final/

Cheap dig. And it was the 2IM that she inhaled water.

Yep and she will NOT make podium in 200 IM

Always an excuse with her it seems, or just bad timing??

She’s been a stalwart of the Canadian team for years now swimming some of the toughest events. She wasn’t named captain of he ISL team for no reason. We don’t know yet fully the reasons here. If she is slightly off health wise then it’s a good decision to rest from the grueling 4IM where she was not a clear medal threat, and get healthy for a realistic run at the 2IM gold… Best of luck to her!

She has a habit of scratching last minute. Never thought she’d do it at the Olympics. Wonder what’s the excuse now

Appears as though the decision to scratch was made too late.