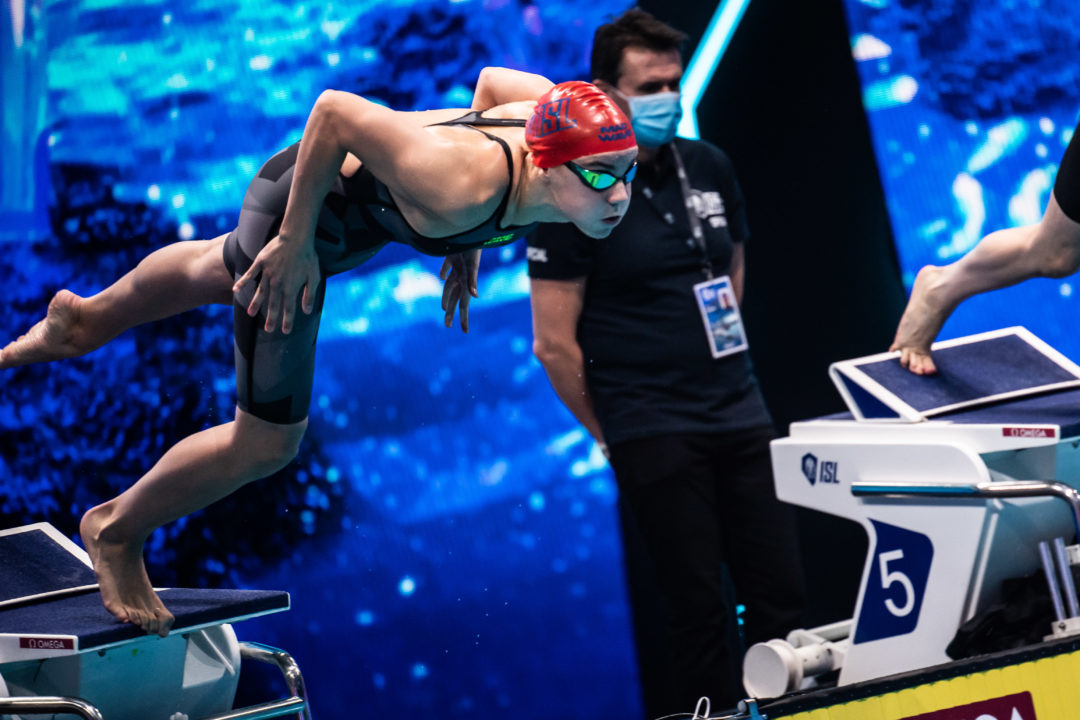 We’re getting closer to the top 50, but we’re not there yet. Some of these swimmers show minor medal (or higher) promise, some are seasons veterans who could be on top of the world this year if they’re on form and some had huge ISL seasons and are starting to make inroads in LCM.

#74: Ilaria Cusinato, Italy – Cusinato looked like she might be a worthy IM challenger in 2018, and her lifetime best 4:34.65 from the Settle Colli Trophy in 2018 is nothing to scoff at. If she can return to form after a stint with Shane Tusup’s training group, she can build off of a bronze at the 2019 European SC Champs in the 400 IM.

#66: Kasia Wasick, Poland – Wasick was a huge spark during the ISL season, finishing in the third spot for 50 free power and #7 in the 100 free. A standout sprinter at USC, Wasick is hitting her stride post-grad, and she went a lifetime best and Polish record 24.58 in the 50 (LCM) just a couple weeks before the pandemic hit. Her 23.30 in SCM was really impressive this past ISL season, too.

#62: Emily Escobedo, USA – Like Olympic medalist Katie Meili, Escobedo is an NCAA mid-major standout who has become an international medal threat post-grad. Her 200 breast is her biggest weapon, where she’s been 2:22.00 in LCM. During the ISL season, she hit 2:16s on multiple occasions, and only Lilly King and Annie Lazor were faster. A 1:07.1 lifetime best in the 100 breast long course last month is a sign that Escobedo has much more in the tank in the big pool.

#61: Bronte Campbell, Australia – Younger sister of 100 SCM free World Record-holder Cate Campbell, Bronte was 52.27 in 2018 in the long course 100 free, and she was also 52.03 with a flying start on Australia’s WR-setting 400 free relay at the Commonwealth Games. She’s been hampered by injuries, but if she can get back into 52-range in the 100 or 24-low in the 50, the 2015 50/100 free World Champion can still make the Aussie team individually for Tokyo and challenge for medals.

#59: Zhang Yifan, China – The 200 fly has not had a clear leader this last Olympic cycle, meaning it’s about time for a young talent to step up and do something. Zhang is one of two 2000-born Chinese women to go 2:06 in this event in fall 2020 (the other is directly below). Zhang was 2:06.99 at Chinese Nationals, and she is the 16th-fastest performer in this event since Rio.

#58: Yu Liyan, China – Lu has been a hair better than Zhang — at Chinese Nationals, she was 2:06.83, which has her at #14 since Rio. Of course, some swimmers ahead of her have faded out of the international consciousness. In 2020-21, for example, the story is different: Zhang is #3 in the world and Yu #2. The only problem? #1 is another Chinese swimmer, Zhang Yufei, who unleashed a 2:05.4 in January. Only two can race in Tokyo.

#57: Phoebe Bacon, USA – America has a problem, albeit a good one (for the coaching staff, at least): there are too many fast backstrokers. Bacon is one of them, and if she can make it through a ridiculous field at Olympic Trials, she’s an Olympic medal contender. She beat Regan Smith head-to-head at the 2019 U.S. Open, and her 58.6 from that meet (which would’ve won silver in Rio) has her eighth this Olympic cycle and fourth since fall 2019.

#55: Martina Carraro, Italy – Carraro was the queen of Italian breaststroke before a certain teenager, Benedetta Pilato, came along. She won bronze in the 100 breast at the 2019 World Championships, a meet where she also touched fifth in the 50 breast.

#54: Ajna Kesely, Hungary – Kesely could be *the* face of Hungarian swimming sooner or later. At the 2019 World Championships, she set the Hungarian record with a huge 4:01.31 in the 400 free, though even a time that fast couldn’t make the podium (she was .02 behind American Leah Smith, who took bronze). Kesely was also sixth in the 1500 after going 15:54.48 in prelims.

#52: Mallory Comerford, USA – While Comerford hasn’t been electric the last year or two, she is still the only other American under 53 in the long course 100 free, ever, behind Simone Manuel. Her 52.57 from 2017 has her at the #7 performer ever, and she was 52.98 leading off Team USA’s American Record-breaking 400 free relay at 2019 Worlds, which won the silver. Comerford will need to be on her game to make the U.S. team individually, though, and it might take a 52 at Trials to get it done.

I see no lies

That Shkurdai entry got me thinking. Who was closest to being faster than her in both?

Actually scratch that, it’s probably Regan Smith, who has the exact same 100 fly PB (57.34) as Coughlin (and is obviously much faster in the backstroke!).

Claire Curzan is also fast. Do not know if she has a recent 100 back LCM to rest my case.

Yeah, so many fly/back specialists in short course, but LCM really is a different beast!

Hosszu doesn’t have a fully rested 100 fly, but I think she’s potentially close.

I understand why Belmonte is ranked so low, but I think she’ll prove a lot of the doubters wrong this summer. She benefited massively from the year delay. #BelmonteGoldIn200Fly

Did something happen to Allison Schmitt after 2012? She hasn’t gone a PB in the 200 since then.

Well I mean… her best time is the second fastest swim of all time, so the fact that she hasn’t PBed in a while isn’t the concerning fact.

Yifan could even challenge for a medal.

The problem is she might not qualify for the OG.

Are you kidding with that no chance of making a final list???

Nope, i don’t joke when it comes to swimming-related lists. Please name the swimmers on that list who have a realistic chance of making a final.

Ok, you are right, they can make it. Galat, Schmitt, Comerford and B. Campbell could all make it, but their main challenge will be to qualify.

61st in the world haha, Now that a joke.

Her ranking certainly isn’t a joke. There are in my opinion 44 swimmers who could win an individual medal and she isn’t one of them. Her absolute best possible ranking would be 45th, but among the group of swimmers who i don’t consider medal contenders, i would rank some out of Ikee/Anderson/Ruck/Coleman/Oleksiak/Toussaint/Panziera/Curzan/Walsh/Hasegawa ahead of her. Maybe you could justify ranking her around 50th, but not much better.

Maybe you could, but I don’t. She’s the 5th fastest swimmer of all time in the 100 free, above her 1 has retired & another serious injury.
She also a chance in the 50.
Your comment above that she won’t even final shows your opinion is tainted.

Well, if my opinion is “tainted”, then this discussion obviously won’t lead anywhere. For this discussion it doesn’t matter whether where she ranks on the all-time list, the ranking is for 2021 and not for lifetime achievements.

Also interesting that you as an australian think that i am biased, while you aren’t …

Yes I’m Australian & yes I may bias. But I have provided facts.
You firstly stated she would not final with no facts, I provided facts that she is 5th fastest of all time & has been in top 6 for over 5-6 years facts over your tainted opinion.
You then provided a whole list of names that you rated higher then her, Walsh, who could go on to be the greatest sprinter of all time, but she has yet to do anything in Bronte’s level. The only swimmer that can compare is Oleksiak, but her only major medal, but a big one was 2016 & her times in recent times don’t match.
So yes maybe bias… Read more »

The best indication we have of right now are times since and including 2019 because there’s been no big taper meets since then and Bronte is #5 (same as her all time ranking) behind only Manuel, Cate, Sjostrom and McKeon. All 3 Australians are potential medal contenders depending on who turns it on at trials.

We also have the indication that the last time she won a medal at worlds/olympics was in 2015, almost 6 years ago.
Also she doesn’t rank 5th in the 50 free since 2019, but 6th (behind Cate, Sjöstrom, Manuel, Liu Xiang and Blume). In the 100 free she also ranks 6th behind Cate, Sjöstrom, Manuel, McKeon and Ikee. In the 100 free it seems unlikely that she will qualify instead of McKeon/Cate. In the 50 free she could qualify, but since 2019 she only ranks 0.08 seconds ahead of McKeon with her best time. I think she will qualify in the 50 free, but the 50 free is close enough that she might miss the final.

I was talking only about the 100 and Ikee hasn’t been under 53 since 2018 and only once so you might wanna check again.

And she is a beast of a competitor, no one would feel completely safe with her in the field…

We are arguing against a brick wall.

Bronte Campbell has been 52.8 or better every year since 2015 except last year where she had no taper meet. Only reason she might not final is because Australia is the only country that consistently has 3 swimmers in the 52s (Has any other country had 3 at the same time ever?).

Once again, guys, last names are Zhang and Yu, not Liyan or Yifan. Chinese names are Last Name, First Name. Two-syllable names are 99% sure first names.

Don’t care. Everyone knows who i am talking about.

Are you asking before or after the misfortune that always seems to befall her? (Best of luck to her)

Is she still swimming?

Really surprised that Hentke didn’t even make the top 100. I think Cusinato, Brown, Hannis, Schmitt and Comerford are overranked. On the other hand Carraro, Kesely, Shkurdai and maybe also Bacon are underranked, since they are all medal contenders.

literally the top 5 us backstrokers are medal contenders