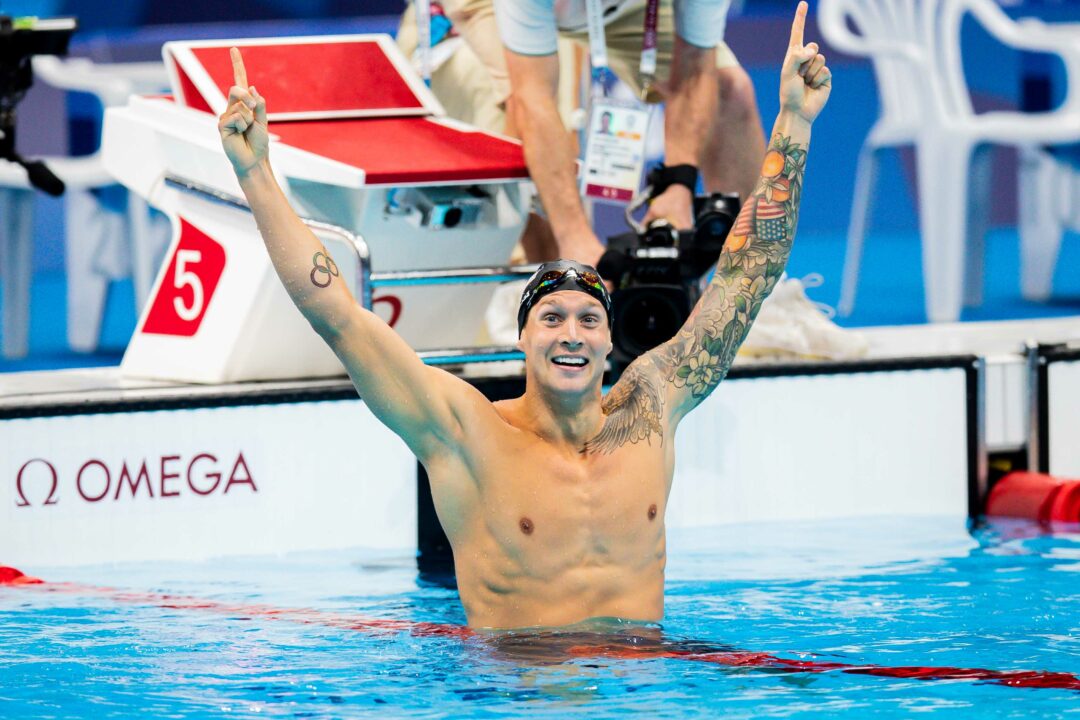 Caeleb Dressel and Emma McKeon are the most decorated athletes at the Tokyo Olympic Games. Dressel earned 5 golds and McKeon earned 4 golds and 3 bronzes. Archive photo via Jack Spitser/Spitser Photography

With the Olympic closing ceremony completed in Tokyo, it is time to announce SwimSwam’s meet awards, recognizing pool swimmers who had incredible performances.

Dressel swam 6 events in Tokyo (100 fly, 50 free, 100 free, 4×100 free relay, 4×100 medley relay, mixed 4×100 medley relay) and brought home a gold medal in all but one (the mixed medley), while posting World Records in 2 events (the 100 fly and 4×100 medley.) On the medley relay, he swam the fastest relay split in the event in history, 49.03, on the fly leg. Only 3 other swimmers have won 5 gold medals at one Olympic Games before and they are Phelps, Spitz and Biondi. Dressel was the most decorated athlete in any sport at the Tokyo Olympics.

Before Tokyo, only two swimmers had ever won an Olympic final out of lane 8. Tunisia’s Hafnaoui is now the 3rd. He surprised everyone by winning the 400 free final with a blistering lifetime best time of 3:43.36 to out touch  Australia’s Jack McLoughlin by .16. McLoughlin had a slight lead of about .35 with 100 meters to go, but 18-year-old Hafnaoui ran him down for the gold.

17-year-old Jacoby became Alaska’s first Olympic swimmer and stunned the world by winning gold in the 100 breast over both World Record holder Lilly King who won bronze and South Africa’s Tatjana Schoenmaker who earned silver. Jacoby’s time (1:04.95) was a huge lifetime best time; she lowered her personal best twice in the U.S. Olympic Trials with a 1:05.71 and then a 1:05.28.

Schoenmaker clocked a World Record time of 2:18.95 to win gold in the 200 breast, crushing the previous World Record set by Denmark’s Rikke Moller Pedersen in 2013 by .16. She battled American King who was out in front with an early lead at the 50-meter and 100-meter marks, but Schoenmaker split a 35.42 on the 3rd 50 and finished strong for the win.  This was 24-year-old Schoenmaker’s Olympic debut, and a historic accomplishment for South Africa who sent no female pool swimmers to the Rio Olympics.

Team South Africa celebrated her victory when she returned to the Olympic Village later:

This is what @TRSchoenmaker came home (Team SA Olympic Village) to. I absolutely love being South African 😭🇿🇦❤️#TeamSA #Olympics pic.twitter.com/YW9FBdcAAB

Dressel swam the fastest 100 meter butterfly in history with a time of 49.45 to undercut his own World Record from the 2019 World Championships by .05.  Dressel exploded off the start and was ahead for the whole race, but he had to fend off Hungary’s Milak who was gnawing away at his lead on the 2nd 50 meters. Dressel split a 23.00 on the first 50, more than half-a-second ahead of the entire field. Milak blasted a 26.03 compared to Dressel’s 26.45 on the last 50, but it was not enough to overcome Dressel’s unbeatable start.

“Katie [Ledecky] was so far in front of us that in the beginning when I started to coach [Titmus] I couldn’t even have this conversation,” Boxall told The Guardian.  “When Arnie came to me she was a 4.12 [in the 400m]. At that stage Katie went 3.56. That’s 16 seconds. We just started chipping away, we started to believe.”

“I can’t help it. I bleed with my athletes,”  Boxall said about his reaction to her win. “When they leave the pool deck with me – whether I’m having a chat with them for an hour if it has to be – but when they leave, they have to start the recovery process and go home. They switch off; I don’t… I go home and dream for them.

when the preworkout kicks in #TokyoOlympics pic.twitter.com/xkU7zyF0gG

I’d add Rikako Ikee competing as an honorable mention moment of the meet as well.

I think Zhang Yufei’s 200 fly should be one of the swims of the meet. That was the best time in textile by a fair amount. The field was surprisingly good too with 2 other 205s.

Amazing athletes, one and all….congratulations to all…

Also, Scott earned a silver medal in the 2IM too.

If you’d told me on day 1 that male swim of the meet would be Dressel going 49.45 I’d have probably thought it was going to be a bit of a meh Olympics. But it wasn’t, it was awesome.

Shows fast swimming’s great, but racing’s where it’s really at.

While Dean Boxall’s “celebration” may unfortunately be viewed as just amusing and admirable by some, award-worthy here, and merely as over-enthusiastic self-promotion by others, IMO it needs to be placed in the context of Boxall’s own previous statements regarding the militarism and violent imagery used in his coaching. He has previously spoken about his pre-meet talks to his young swimmers about “war”, “warriors”, “Gallipoli”, and “killing something.” Five coffees before sunrise… that’s what fuels Australia’s next super coach – 2GB Also, Boxall’s recent statements (made twice) on a post-Olympics podcast about taking Ariarne Titmus to “a dark place” and “a dark place of pain” as her coach are IMHO hard to dismiss as just… Read more »

Ariarne said she never asked him to stop putting her through pain. Isn’t every swimmer put through pain when training for the Olympics? I know many that vomit occasionally. Aldo runners, rowers etc etc.
I think you may be reading too much into the war stories too.

Seriously? A 20-year old female swimmer, already under the care of an ex-rugby trainer (for whatever reason) for a shoulder subscap issue, asks a 43-year-old male coach to continue to bring the pain, and you are alright with that? I listened to Boxall’s “kill something” comments and watched his video “celebration”, and personally I would not allow my child to be on a swim deck with him.

Sad sack . .Football trainers across all codes are top of the crop.

You don’t think Ledecky didn’t go thru the same pain to get to this level & maintain it over the years.
Even Ledecky admitted her admiration of Titmus, because she knew the level of training it takes to get to this level.
Perhaps you should be less salty.

Did Brett H ask Titmus about the ex-pro rugby trainer, Jeremy Hickmans, who Boxall brought in for the “extraordinary treatment and rehab” of Titmus’ shoulder per sportswriter Julian Linden’s article in The Australian in March entitled “Arnie Calls In Big Guns For Tokyo”? https://youtu.be/7j5NFC8kyso

Why do people keep harping on about brining in an expert to help with her shoulder? are you implying that she is receiving some illegal treatment?

Hickman is a strength and conditioning coach that has worked for multiple Rugby League premiership winning teams – a sport that has an insane amount of shoulder injuries. Rehabbing and preventing further shoulder injuries would be his bread and butter.

They are salty.
Ash Barty took 2 years off the tennis circuit & played cricket & came back & has won 2 grand slams & world no 1 for 80 weeks, some dodgy there.

Yui Ohashi deserved an honourable mention for doing the 200/400IM double. I suspect she was overlooked because her times weren’t very fast. Many would say that if Kaylee McKeown had swum the 200IM she would have won the gold given that her trials time was faster than Ohashi’s winning time. Still, you can only beat the competition thrown at you and winning two gold medals is no mean feat.