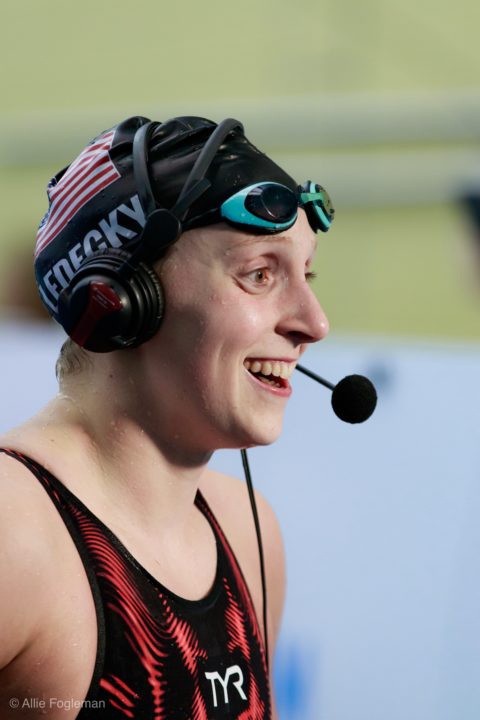 An overwhelming majority of voters say the swimmers on each team's roster are the deciding factor in which ISL franchise they've been rooting for. Archive photo via Allison Fogleman

Our most recent poll asked SwimSwam readers how they pick which ISL franchise to root for:

Question: How do you decide which ISL team to root for?

An overwhelming majority of voters say the swimmers on each team’s roster are the deciding factor in which International Swimming League franchise they’ve been rooting for.

80% of voters said the swimmers on the team has determined their early ISL fandom, with no other polling option getting more than 10% of the votes. That tracks with what most would expect – in a sport that has mostly been individually-oriented (with the notable exception of NCAA swimming), fans have connected more with individual athletes than they have with other aspects of the brand-new ISL franchises.

Somewhat surprising: despite the early focus on the general managers of each franchise, only 1% of voters said that determined their fandom. The GMs were the only thing we knew about each team for some time, with rosters coming fairly late in the game. And despite many of the GMs being notable former athletes themselves, not many fans are placing rooting importance on the managers or coaching staffs of any teams.

Team location polled 10%. That’s also a little surprising, given how little the team location means. Only about half of the ISL franchises will even host a meet in their ‘home’ city. The London Roar effectively host the European derby in London and the American derby in College Park Maryland is about as close to Washington, D.C. as you can get. Naples, Italy is roughly the home of the Italy-based Aqua Centurions, and Budapest, Hungary is central for the Hungary-based Iron franchise. Meanwhile Energy Standard, the LA Current, the New York Breakers and the Cali Condors don’t have a meet anywhere close to their home base, and the other meets (Indianapolis, IN; Lewisville, TX; Las Vegas, NV) aren’t even remotely ‘home’ meets for any franchise.

At the same time, the athletes in each franchise have at best tenuous ties to their location. Washington D.C.-born Katie Ledecky is probably the athlete most tied to their location on the American side. Still, the location is an easy ‘in’ for fans in that city, and it’s possible we’ll see the ISL teams develop a better connection with their local community if the league grows in future years.

Only about 4.3% used the franchise name or mascot to determine fandom. That was less than the catch-all “something else” option.

Below, vote in our new A3 Performance Poll, which asks voters to weigh in on the push to allow college athletes to earn money from their names, images and likenesses:

To those who didn’t vote for the swimmers on the team or even location, please explain yourselves.

Obvious answer would be “whichever is the best team.” If only 4.6% chose their favorite team based on which team is winning, that’s probably a much lower rate than we see in the major professional sports leagues….

I’m just rooting for whoever has Caeleb Dressel

Is this a new concept altogether? Like the swimming response to the NFL? Does anyone even go watch this stuff?

Quite a few people did in Naples. Not so much in Indy because none of the teams are from Indy. It’d be like having a pats/giants game in Dallas. Besides that it’s been doing well

And NFL didn’t invent the concept of team sport.