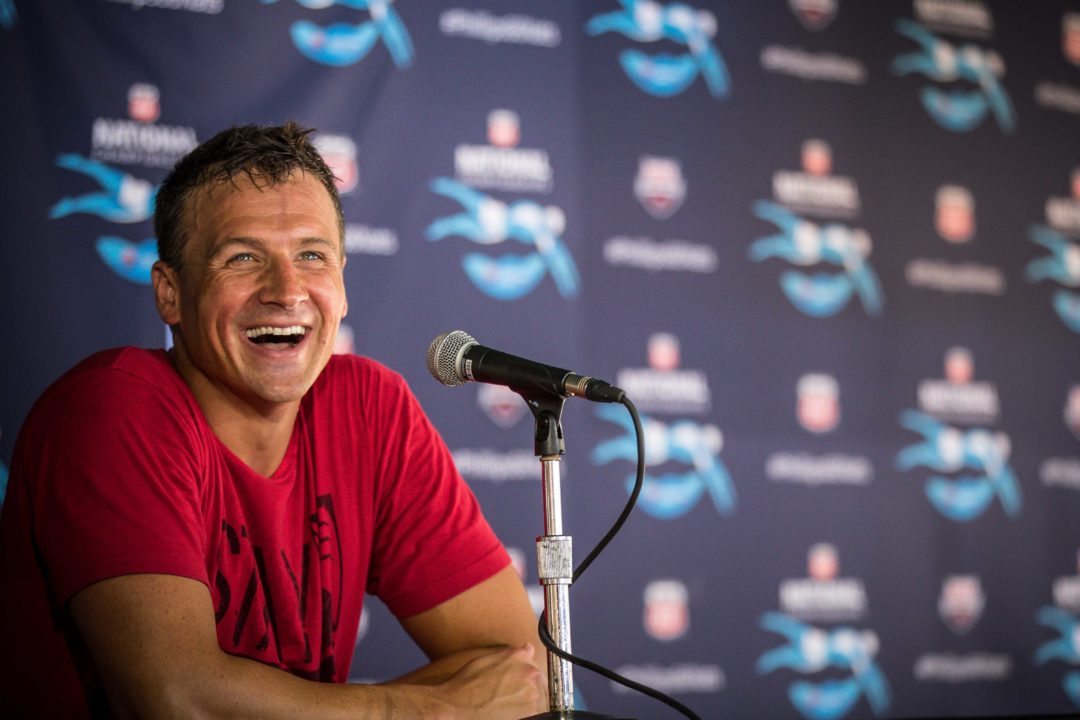 About 70% of SwimSwam voters said Ryan Lochte would make the 2020 U.S. Olympic team, which would be his fifth straight Olympic berth. Archive photo via Jack Spitser/Spitser Photography

Our most recent poll asked SwimSwam readers about Ryan Lochte‘s chances at a fifth-straight Olympic berth:

About 70% of SwimSwam voters said Ryan Lochte would make the 2020 U.S. Olympic team, which would be his fifth straight.

That’s a strong vote of confidence from fans after Lochte missed more than a year on suspension for an illegal IV drip. Lochte returned to action at the end of this past summer, putting up some key swims at U.S. Nationals.

Kalisz had a major down season after going 1:55.4 in 2018. DeVine, too, added time from a year prior and had a change in training bases this year. Meanwhile Andrew is probably a better bet to focus on events like the 50 free or 100 breast, though he could still swim the 200 IM at Olympic Trials. All that combines to leave the door still open for the 35-year-old Lochte to qualify for yet another Olympic team.

Below, vote in our new A3 Performance Poll, which asks voters to pick the winner of the first ISL derby:

Karma catches up with people.
My bet is that both Fosters beat him at trials. Jake swimming with the greatest coach of all time at Texas! Carson on a role and a year of maturity to that already talented individual…. that being said. All three may miss 2 Olympic spots (but my 2 cents, is that a Foster will be a 200 IM Olympian)

Fosters might have a better shot at 400 IM – that may be the event most likely to peak in late teens/early 20s. Litherland came back from the dead this year, and Kalisz is boss, but if either of them are off, 4:10 is more likely to qualify than 1:56 mid/hi.

You’re forgetting my man Bobby Finke. Who’s to say that he doesn’t focus on the 400IM as maybe a 3rd event for trials?

And then 1:57 in Tokyo. I really hope we can send two people who didn’t have to full taper to qualify

I’m pretty sure everyone has to full taper at trials to make the team. Making the US team is generally harder than making the podium.

“Making the US team is generally harder than making the podium.” – this may have been true once upon a time (not sure), but definitely isn’t true anymore.

A quick scan shows that there were only 3 events where it took a faster time to make the US team than it did to make the Olympic podium in 2016:

Just for fun I decided to look at 200 IM in particular since that’s the event we’re talking about. Since 1984, the bronze medal time has been faster than second place at USA trials only three times, ’92, ’96, and ’04 (that one surprised me).

If you look at Troy’s track record of getting his swimmers on the US Olympic Team and then getting them to swim faster at the Games, maybe you’d think differently. Even when Beisel knew she was in the twilight of her career in Rio, she still swam 2 seconds faster in finals at the Olympics than she did at Trials. Lochte, Beisel, Dwyer, Burckle, Dressel, Vanderkaay, all faster at the Olympics,

I think he’s got it. He’s training with the coach who knows him best, with training partners that will push him to be the best, has gotten his head on straight, is getting back in great shape, and has his family right there with him. Don’t forget, he swam two 1:57s and a 1:58 in four days while carrying 20 extra pounds and training intermittently because he had a newborn at home. When he’s on and rested, he can go a 1:55 in his sleep.

Best headline/photo decision of the year right there

3
-1
Reply
KNOWS NOTHING
Reply to  Anonymoose

Two and half years ago everyone hated Ryan. Abram too can be redeemed (but maybe not by next summer).

3
-1
Reply
ERVINFORTHEWIN
Reply to  KNOWS NOTHING

Even if he does not make the team, I would love to see him continue one more year of swimming and take advantage of ISL/World Cup before he retires. With Olympics and WCs out of the picture, some swimmers could take home some serious money when focusing on these meets and an athlete like Lochte deserves to make some big bucks before he steps away entirely.

But, I believe he may not be eligible for ISL. And focusing on the World Cup would keep him away from his family a lot.

That’s correct – he wouldn’t be ISL eligible, based on what we can get out of the ISL.

I voted “no”. With Andrew focusing on this event and Foster improving, I think it will take a lot of work and luck for him to succeed.

I think Foster will be a low 1:57/high 1:56 which would still be a ton of improvement for him, but is going to leave him just outside of it this quad. Andrew is kind of an unknown if he really decides to focus in on the 200 IM, but I see him at a mid 1:56 unless he can figure out his freestyle, and I think even if that’s where Lochte is, he’s such an intense competitor that he’s going to take it.

He has more talent in his pinky than most elite swimmers have in their body. I remember the Marsh quote when Lochte first joined SwimMaC: “the way he moves through the water, it is very special. He has a relationship with the water I’m not sure even he understands.”

Lochte is a genetic beast. The others are mere boys.

I’ve always admired Lochte because he peaked at Phelps-level, withOUT Phelps’ genetic gifts – the extra long wingspan, hyperflexibility, and freakish ability to not produce lactic acid.

He and Tony Ervin have always been marvels to me for that reason.

Pretty interesting how it worked. Lochtes technique was no where near as smooth as Phelps and his speed never matched him due to that but he made up for it with monster endurance and the best underwaters in the world at that time.